Falcon drops in on Squamish 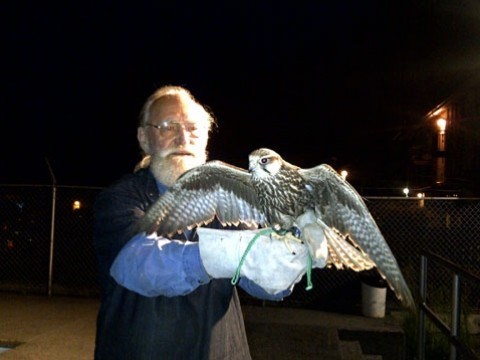 Residents at Squamish's Westway Village weren't quite sure what to make of the small, clearly distressed falcon sitting by their swimming pool.

But they knew they had to get it help as quickly as possible if it was to survive. They put a call out on social media and raptor rescue centre members Thor Froslev and Patricia Heintzman responded as quickly as they could that June 26 evening.

"We were at a concert at the Brackendale Art Gallery (BAG)... and all of a sudden Dorte [Froslev's wife] comes running through the room at the end of a song and says, 'There's a bird we have to go rescue,'" explained Heintzman. When they arrived on the scene, "it was quite obvious it was a tame bird," said Froslev, since it had a radio transmitter and bell on its legs. He promptly put on his leather gloves, collected the falcon gently and returned to the raptor rescue centre at BAG to care for the very hungry bird.

"We keep frozen mice at the centre for these circumstances," said Heintzman, "so we fed this beautiful falcon three mice - as soon as she saw the mice she was very attentive and literally ripped the heads off and gobbled the mice whole, with gusto."

Normally the raptor rescue centre at BAG deals with wild birds, so this was a unique situation for them. To help solve the mystery of where the falcon came from, they took a picture of the tag on her leg and discovered an Ontario phone number. "We called the number and left a message," said Froslev.

On Monday (June 27), a phone call from a falconer revealed the story. The bird turned out to be an 18-month-old Lanner Lugger hybrid falcon, named Twitch. She was bred in captivity for education purposes as part of a program run by the Canadian Raptor Conservancy. Visiting from Ontario, Twitch takes part in bird of prey demonstrations for Grouse Mountain's Birds in Motion series from May to September. Twitch went missing on Friday, June 24 during a demonstration in blustery wind conditions and got blown into the mountains and found her way to Squamish.

The falconers came to retrieve Twitch on Monday morning and were elated to see her again.

"They were just flabbergasted that this bird had flown that far - they had never heard of a falcon being retrieved from that far," Heintzman said. "The falconers were just so happy that Twitch was found.

"They had been out hunting for her all weekend and couldn't believe this bird had made it this far and was still alive."

Intrigued by the education program on Grouse Mountain of which they had no previous knowledge, Heintzman said they are keen to build on the relationship started by Twitch's adventures. "We are thinking of trying to get them [the falconers] up here for the [Brackendale] Fall Fair so people can see these birds, how they fly, how they hunt, how they survive in the wild," she said.

Commenting on how this was a feel-good story with a happy ending, Heintzman added, "If that bird could talk, she'd probably have a few stories to tell."