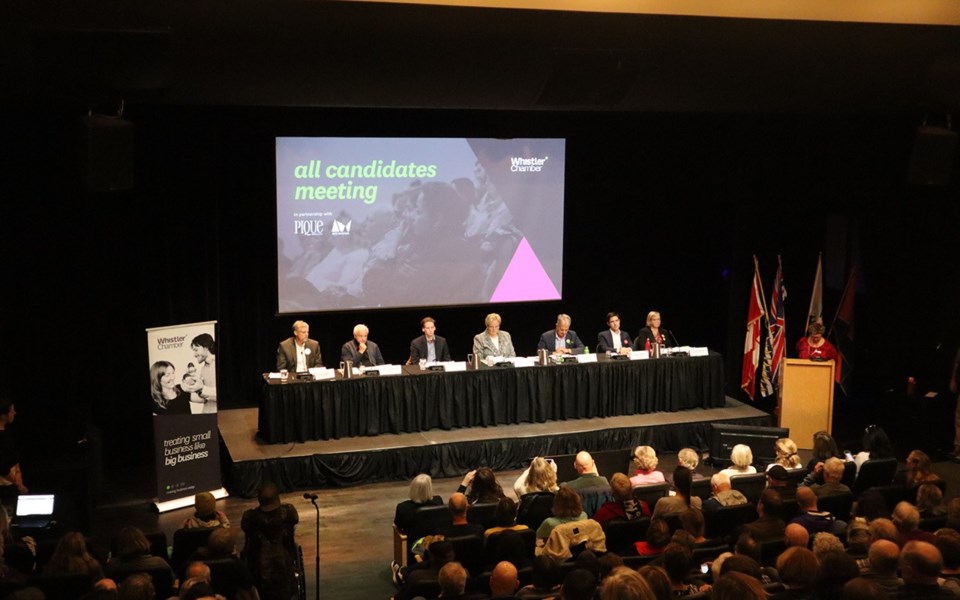 Advance polls are now closed, and the Sea to Sky's federal election candidates are in the homestretch to election day on Monday, Oct. 21.

According to preliminary figures from Elections Canada, the four days of advance polling—open from 9 a.m. to 9 p.m. for the first time—saw 4.7 million electors cast an early ballot, a 29-per-cent increase over the same period in 2015. The BC Federation of Students is reporting that on-campus voting has increased by 60 per cent in this election as well.

A breakdown of the estimated number of electors who voted at the advance polls, by province or territory and electoral district, for all 338 electoral districts is being calculated, and will soon be available on elections.ca.

Hundreds packed the building to hear from the candidates on issues ranging from climate change, affordability and First Nations relations to small business, labour, wildfire and more.

The mood throughout the night was cordial and respectful amongst the candidates, even when they disagreed, with some good laughs scattered throughout.

The majority of the questions at the outset went to Weiler, who was asked (among many other things) how he would help Whistler cope with climate change, address its labour shortages and help small businesses, as well as if he has any plans to try to resurrect electoral reform—a key Liberal promise in the 2015 election that was eventually broken.

"I know a lot of people are really disappointed that we weren't able to do that ... I'm very much in support of looking at ways we can improve our democracy," Weiler said, pointing to Liberal initiatives like an independent senate and repealing the Fair Elections Act, but stopping short of saying he will advocate for electoral reform.

"The fact that I can say, 'you know what? I think there is climate change, I am all in favour of LGBTQ rights, and I am pro choice' is something that I love ... What's the worst they can do to me? Kick me out," Loren said.

"I think that's what I have to do, is actually voice the opinion of the riding ... we have to stop voting for our prime minister, and start voting for ourselves."

Taylor and Wilson were asked what their respective parties "non-negotiables" were in the event that they were to prop up a minority government.

"We will not support any government that plans to build and complete the expansion of the Trans Mountain pipeline," Taylor said.

"After that the expectation is to remove subsidies from all fracking, all gas and oil exploration, any monies that are going to the gas and oil industry, and begin to migrate those dollars incentivizing other clean technologies that exist today."

For Wilson, the answer was electoral reform, climate change and housing.

"We do need to treat climate change as an emergency. I don't know whether or not stopping the pipeline would be the top of that list, but it would be in there," she said.

"I also think that we have to have somewhere in there treating housing as an emergency ... unless we address that we are going to have serious ongoing problems."

After not receiving any questions an hour into the meeting, Grimwood walked out with a quick word to moderator Mo Douglas, saying the format didn't work for him.

"Quite unapologetically, that's not the point. The point is to have this format work for you, because whoever is elected will be working for you," Douglas told the crowd to raucous applause.

Jeffrey, in his opening remarks, eschewed the Rhino Party's farcical nature to deliver a fiery speech that at times had the crowd laughing along.

"The main promise of the Rhino Party used to be that we wouldn't keep any of our promises—but since the Liberal party has decided to co-opt that promise ... my new promise is simply all truth, all the time, and non-partisan representation of you, the people," Jeffrey said, to applause from the audience.

Both Jeffrey and Bebb positioned themselves as alternatives to the status quo of Canadian politics.

"I think we need some more integrity put back into the process," Bebb said.

After a question from an 11-year-old wondering why the People's Party says it won't do anything to address climate change, Bebb said the Greens have never told the whole story on global warming, referencing recent scientific and political developments—including a recent letter to the UN from a "high-level global network of 500 prominent climate scientists and professionals" declaring there is no climate emergency.

"Wherever the debate on global warming ends up, these developments make it crystal clear that there is no consensus and we are not in any sort of emergency situation," Bebb said.

"Because there is no need to rush to judgment, the PPC will take the time to consider all new evidence as it becomes available. In the meantime, will the Greens abandon their climate hysteria now that science is turning against them, or will they continue to yell fire in classrooms overcrowded with frightened young children simply to advance a political agenda?"

"This is from a gentleman who has to pick on a 16-year-old and call her mentally unstable," he said, referencing PPC leader Maxime Bernier's tweets about climate activist Greta Thunberg.

"The scientists he refers to I think all graduated from Trump University, paid for by the Koch brothers."

When Weiler and Loren were asked about Bill C-51—the anti-terrorism bill introduced under Stephen Harper expanding government surveillance powers—and whether their governments will bring forward legislation to open backdoors into encryption, both said they didn't know what the bill was.

"Too many times people try to give you an answer without actually knowing what the hell they're talking about," Loren said to laughs from the crowd.

"So I don't know what I'm talking about, but I will get back to you."

In the final word of the night, Jeffrey said that it was the best-organized of all the debates, but hosted the least diversity of ideas.

"I'm undeterred. I will not give up on you regardless of whether you give me a chance, and I will hold whichever one of these jokers makes it in accountable," he said, to more laughs from the audience.

"I'm very tired of only being considered a voter, a consumer, a taxpayer. We're citizens and we are constituents. We need to ban lobbying outright, we need improved regulations and increased investigative powers for rooting out corruption, we need much steeper punishments for political corruption and we need that electoral reform we were promised four years ago ...

"Don't vote for the lesser evil; do not vote for evil, do not support evil. Follow your heart, use your mind. Vote for good. It feels great."

Find a full video of the event at www.piquenewsmagazine.com/whistler/video-heres-what-happened-at-whistlers-all-candidates-meeting/Content?oid=14528638

Your postal code determines where you vote (most will vote at the Conference Centre, for example, while Cheakamus residents will vote at the Athlete's Centre). Check your voter information card or head to elections.ca to find yours.

To vote you must be 18 years old on Oct. 21; a Canadian citizen; and prove your identity and address.

If you are not registered to vote, you can register in person at the polls on election day.

You are legally entitled to three consecutive hours away from work to vote.