Cooperation will be key moving forward, candidates agree
Sep 22, 2015 4:30 AM By: Braden Dupuis 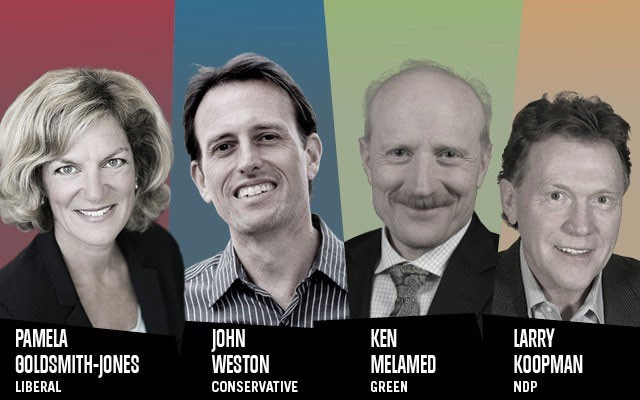 Through his work representing Aboriginal people in the courts, Conservative MP John Weston earned his own indigenous name.

"I represented them and assisted them both in community activism and in the courts, and what I really learned from them, which I found to be a precious lesson, was their own valuing of equality.

"They loved their rights and responsibilities as Canadians, and they want to protect those and not be separated from other Canadians by a government that would have special rights."

It was that lesson, Weston said, that prevented him from supporting the Sliammon Treaty in 2011.

"It had a clause in it that would have allowed Sliammon law to prevail over Canadian law, and even though it was introduced by my own government, and I had helped to achieve it and had worked very hard on behalf of the Sliammon people, I couldn't support the treaty."

Weston's decision came as a shock to the Sliammon — "We are absolutely appalled and stunned that our own MP, John Weston, has not been a strong supporter for moving this matter forward," Sliammon Chief Clint Williams said in a 2011 press release — but allowing one group to have "veto" rights doesn't align with Weston's views.

"There's several values that define Canada. One of them is equality. And where we don't see equality in our arrangements, we need to strive to reach equality," he said.

"I believe that an essential aspect of Canada is our diversity, but at the same time I don't believe that any group should have veto rights over other groups."

The party positions of the Liberals, NDP and Greens take a more collaborative approach to the question of Aboriginal land and title.

Chief Ian Campbell of the Squamish Nation said it's unfortunate when a party takes the position of Weston and the Conservatives.

"It does not recognize the reality of the Supreme Court of Canada with well over 200 court cases that have reaffirmed Aboriginal rights and title beyond Section 35 of the Canadian constitution," Campbell said.

"Canada has to come to the realization that this country is not founded on French and English, which is the story that continues to be perpetuated, but in fact it goes way further back, with numerous indigenous nations that are the foundation of this country.

"(When) you superimpose a jurisdiction on top of Aboriginal title, and continue to use that as a premise and justification for running roughshod over Aboriginal rights and titles, that just becomes a sour point where it feels like we're stepping back to pre-1960 as opposed to moving forward to a new millennia."

While the Conservative government has its share of critics when it comes to First Nations issues, Weston said his government has a "stellar record" of achievements since 2006.

"We've seen a landmark health agreement, investment in infrastructure — including drinking water — the historic reconciliation commission that was struck, the creation of a transparency act which unfortunately the other parties voted against," he said.

"There's been the apology, which again was lauded by Aboriginal and non-Aboriginal people, and another landmark development was creating equal rights for women on reserves under the Canadian Human Rights Act."

But Liberal candidate Pamela Goldsmith-Jones said resources for First Nations have been "slashed continually" under the current government.

"I believe there's about $1 billion in government funding that was intended for Aboriginal people that has lapsed since 2009," she said.

"We feel quite strongly that these issues are not going to go away, that the courts are not the place to come up with solutions, and that the politics of division are not helping anybody."

Improving relations with First Nations has been Goldsmith-Jones' goal since she first ran for mayor of West Vancouver in 2005, she said.

"From the very beginning that was my intent and that was the mandate from the community," she said.

During her term she worked with neighbouring First Nations on initiatives like the Spirit Trail and facilitated cultural art installations, as well as helped with coordinating the 2010 Olympics.

"I'm a big believer in chasing the things that you can agree on, and to get working together and developing relationships, so that the challenging things actually become opportunities to find solutions," she said.

This past June, Goldsmith-Jones completed an executive MBA in Aboriginal Business and leadership at Simon Fraser University.

Since being elected mayor of West Vancouver, Goldsmith-Jones said she has forged strong relationships with First Nations throughout the riding — something that can't be "fast tracked."

He said he was especially proud of Whistler's collaboration with First Nations during the 2010 Olympics, but noted that the federal government was largely absent from the discussions.

"After decades of federal neglect, the federal government continues to focus its efforts in court, wasting money in court battle after court battle and deferring an estimated $4 billion liability to the Canadian taxpayer and our economy."

The Green Party has proposed creating the Council of Canadian Governments, in which First Nations, Metis and Inuit peoples would be full partners on all issues of national importance.

The party's focus would be on negotiating land claims in good faith, implementing the findings of the Truth and Reconciliation Commission, an inquiry into missing and murdered women, the protection of language and culture and taking steps to ending poverty, Melamed said.

The damage done to relations between Canada and its First Nations has been further exacerbated by some of the Conservative Party's other policies, said NDP candidate Larry Koopman.

"The damage that's been done by Stephen Harper and the Conservatives is enormous," Koopman said.

"When we look into the Environmental Assessment process and working to protect our lakes and rivers and Bill C-51, these are things that have really done damage to our First Nations relationships, so we have to address those things in addition."

The NDP has promised an inquiry into missing and murdered indigenous women within 100 days of being elected. Koopman said the party would also focus on fixing the treaty process, as well as improving housing and access to safe drinking water on reserves.

On a local level, he'd like to explore a partnership between Mount Currie and Whistler.

"There's the big unemployment issue with Mount Currie First Nation and there's a real need for workers in Whistler," he said.

"I'd love to facilitate looking at an employment training program that bridges the Whistler business community, the employers, with the Mount Currie First Nation."