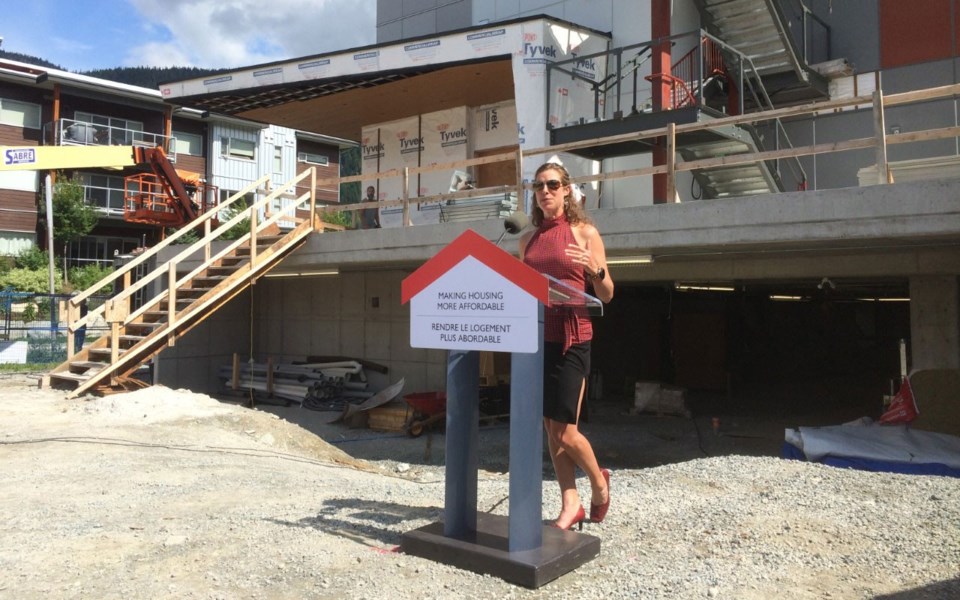 The federal government has announced it will invest millions in a new 24-unit staff rental housing building in Cheakamus Crossing as part of Ottawa's National Housing Strategy.

The four-storey development is under construction at 1020 Legacy Way and will include four studio, 13 one-bedroom and seven two-bedroom units. The Whistler Housing Authority (WHA) project will add 53 beds to the community's housing stock.

The building is expected to open by late September or early October, according to WHA general manager Marla Zucht.

All of the homes will meet affordable housing criteria, and 17 units will have rental rates "well below 30 per cent of the area's median household incomes," according to the federal government. Based on the most recent census data, Whistler's median household income in 2016 was $80,000. In a follow-up email, Zucht said the rental rates are expected to range between $1,250 and $1,950 a month, depending on unit size.

The formula used to calculate the rental rates will be maintained for at least a 50-year period, Zucht noted.

"We know there is still tons of work to do," said Whistler Mayor Jack Crompton at a press conference announcing the funding on Monday, July 15. "We need more shovels in the ground, we need more housing, but it's nice to be able to take a moment to celebrate this, to celebrate the fact that people will be moving in soon and that what was once a garbage dump is turning into a tremendous place for people to live."

Ottawa is investing $7.3 million into the build through its Rental Construction Financing initiative, which is delivered by the Canada Mortgage and Housing Corporation (CMHC) and is designed to support affordable rental housing construction projects for middle-class families in costly housing markets across the country. Last year, the Liberal government increased the amount for low-cost loans provided through the initiative from $2.5 billion to $3.75 billion.

"Any project funded through the Rental Construction Financing initiative must meet criteria for affordability, energy efficiency and accessibility, and this project at 1020 Legacy Way will support people who simply cannot afford the escalating pricing of market rates," said Sea to Sky federal MP Pamela Goldsmith-Jones. "Our [initiative] achieves this by providing low-cost construction loans for a 10-year term to the development industry, and it has been wildly successful."

The project will receive another $1.7 million through the CMHC's Affordable Housing Innovation Fund, thanks to its energy-efficient design. Zucht said it would be Whistler's first fully Passive House-certified apartment complex, and is forecast to achieve energy and greenhouse gas emission reductions of 43 per cent, compared to 2015 model building codes.

"Supply of affordable rental housing and access to it is so important for the local population, but it's not one size fits all, and we know the impacts climate change is having on our community, so by being innovative, providing innovative housing solutions such as the Passive House building, it takes us a long way ahead to meeting those goals," Zucht said at the press conference.

Ottawa has also committed to an equity contribution to the WHA's upcoming affordable rental development at 1330 Cloudburst Dr. in Cheakamus, Zucht said. Between 40 and 45 rental units are slated for that project, and join two other recent WHA projects that are already completed: 1310 Cloudburst Dr. (27 units) and 8350 Bear Paw Trail in Rainbow (25 units).

In the RMOW's most recent Community Life Survey, published last month, 52 per cent of residents polled named housing as the issue that should receive the greatest attention from municipal officials, with transportation coming in a distant second, at 18 per cent.