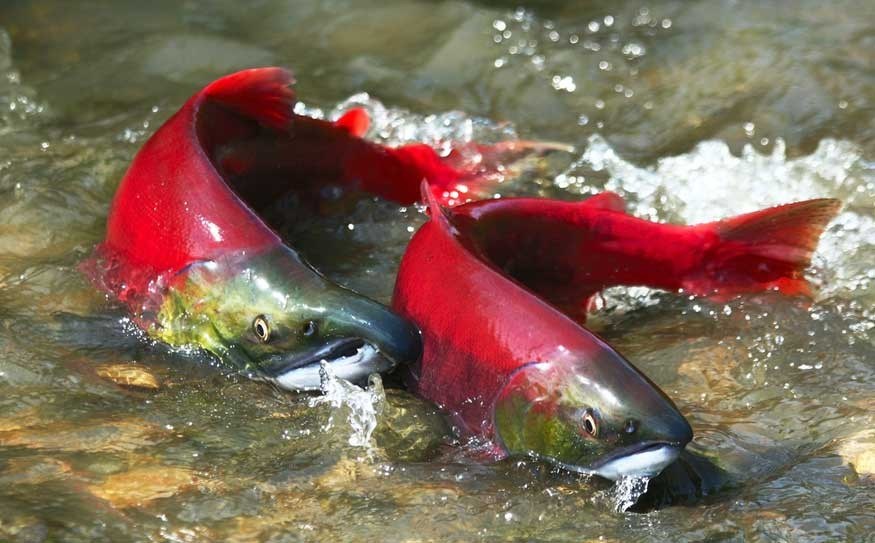 SMELLS FISHY Those in the Sea to Sky corridor concerned about the future of B.C. salmon are happy with the findings of the Cohen Inquiry into the 2009 Fraser River sockeye salmon run.

When it comes to salmon issues in B.C. the top concern for John Fraser is a lack of leadership on the issue.

The former federal fisheries minister and other concerned salmon preservationists rang alarm bells in 2009 when the number of sockeye salmon returning to the Birkenhead River was far lower than expected. They voiced their concerns to MP John Weston, who pressured for the creation of a federal inquiry into the depleted 2009 Fraser River sockeye run.

The wait for Justice Bruce Cohen's report on the 2009 sockeye collapse ended Oct. 31. Cohen released his much-delayed findings, noting that Fraser had done similar work on the issue in previous investigations.

Fraser said he met with Cohen and his team before the inquiry began hearing testimony and in that meeting Fraser said he shared his knowledge as a former federal fisheries minister and as an individual involved in two previous similar investigations.

According to Fraser, the most important thing Cohen wrote in his report was a section that stressed the need for the federal fisheries minister to take full control of fish issues.

"Anybody who tells me that it is perfectly alright for the federal government to now talk about abrogating its responsibility and shifting it off to the province or to NGOs (non-governmental organizations) or to special interest groups, it's a lot of claptrap," Fraser said from his home in Whistler. "Constitutionally, if the federal government isn't in charge, no one is in charge and the public interest isn't looked after, nor are the fish or the habitat."

West Vancouver-Sunshine Coast-Sea to Sky MP John Weston said from Ottawa this week that he brought constituency concerns to his Conservative party colleagues after people in his riding expressed their salmon concerns with him.

Weston said he took particular note of Cohen's opinion that the fisheries minister should take full responsibility for fish issues.

"That's good for us to hear and for the minister to hear," said Weston. "Ultimately, the minister is supposed to ensure the sustainability of wild salmon as a high priority."

The fisheries committee Weston serves on in Ottawa has been studying Bill C-45, which is part two of the controversial budget implemention act.

"What the government is trying to do is promote the economy and jobs while sustaining the environment and the fisheries," said Weston. "The key next phase, I believe, is the consultation that is the precursory to the enactment of regulations."

He went on to say that senior Department of Fisheries and Oceans (DFO) leaders have indicated some of the recommendations made by Cohen are reflected in the Conservative government's newly enacted legislation.

"We've moved from a habitat regime to a fish productivity regime which includes habitat," said Weston. "There will be consultations on how we achieve productivity and habitat is part of that."

Dave Brown, another Whistler resident concerned about the fate of B.C. salmon, said he is pleased with the Cohen report. Brown noted that Bill C-38, the omnibus budget bill that impacted the Fisheries Act, redefined how fish habitat is being protected and that is a concern to him.

"Despite our concerns, the government went ahead and made significant changes," said Brown. "That led us to doubt how serious this government was about protecting salmon."

Brown said he has concerns about the recent DFO cutbacks and he intends to share his concerns with Weston.

"We are going to be letting John Weston and the federal government know that we're expecting them to act on the report and specifically we're going to reference changes to the Fisheries Act that put habitat at risk," said Brown.

Weston said that through the recent discussions about salmon he has valued the input of people like Fraser and Brown.

"I'm continuing to promote input from them and others," said Weston.

To that end, a meeting with Weston and his salmon advisors in the riding is planned for this month.

In his report, "The Uncertain Future of Fraser River Sockeye," Cohen offers 75 recommendations over more than 1,200 pages of findings from the 2010 hearings.

"Some, I suspect, hoped that our work would find the "smoking gun" — a single cause that explained the two-decade decline in productivity — but finding that a single event or stressor is responsible is improbable," Cohen wrote in his summary.

According to Cohen, there is much more to be learned about what is impacting salmon returns.

The full Cohen report can be found at www.cohencommission.ca.