Fido steps up investment for 2016 World Ski and Snowboard Festival 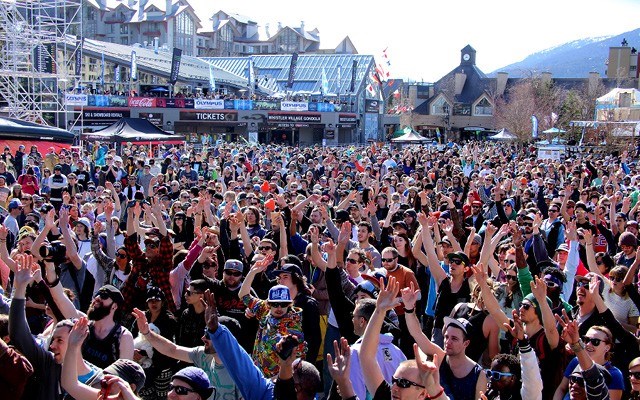 SOULED OUT Fido is helping bring a distinctly regional flavour to the World Ski and Snowboard Festival's music lineup in 2016. Iconic hip-hop group De La Soul is pictured performing in Skier's Plaza at the 2014 event. Photo by Dave Humphreys / Courtesy of WSSF

Fido has stepped up to the plate in a big way in Year 2 of its deal with the World Ski and Snowboard Festival (WSSF), coming onboard as sponsor of the event's Outdoor Concert Series.

The cellular service provider inked a three-year deal with the festival that began in 2015, but, while the terms of the agreement aren't public, WSSF producer Sue Eckersley said Fido had made a "significant" increase to its investment this year.

Fido partnered with streaming music service Spotify to create this year's lineup, identifying some of the most searched and listened to Canadian artists in the Sea to Sky, Lower Mainland, Vancouver Island and beyond. And while the bill is missing some of the big-name artists from south of the border that have graced the WSSF stage in years past, it has a distinctly regional flavour that has cemented what Eckersley called "the biggest lineup we've ever had."

Featured acts this year include Montreal funk duo Chromeo, country star Tim Hicks and Juno-winning rock n' rollers Monster Truck. Fido is also hosting a two-concert series in advance of the fest featuring Whistler DJ duo SkiiTour, who will be playing March 31 in Calgary and April 1 in Vancouver as a way to build exposure for the event.

"When we sponsor an event, we'd like our participation to mean more than simply putting logos up around the city," said Fido Brand VP Florent Bayle-Labouré. "So we looked at what we could to amplify WSSF."

On the sport side of things, the Monster Boarderstyle returns with a head-to-head boardercross-style race integrated with slopestyle terrain features and live music. The IFSA North American Junior Freeride Championships will also be hosted during the festival's 10 days, open to 12- to 18-year-old skiers and boarders looking to compete on some big-mountain terrain. Organizers hoped to bring back the AFP World Tour Finals to the program this year, but Eckersley said that "wasn't a reality" given the festival's current financial situation.

"It's definitely helped a lot to have the Fido dollars in the pot, but we still don't have a title (sponsor), so we need more money to keep things building and growing," she added.

The 2015 festival was hampered by poor weather, leading to an estimated 10-per-cent drop in attendance and forcing a last-minute relocation of WSSF's signature event, the World Ski Invitational big air, from Skier's Plaza to Blackcomb Mountain. Eckersley said organizers are always looking for ways to "weatherproof" the festivities, and have tweaked this year's big air showcase on Saturday night as a result.

"There's going to be a big air, but it's not going to be a competition, but a showpiece," Eckersley said of the April 16 showcase in Skier's Plaza. "If you have a competition big air scheduled in the (valley) bottom, it's incredibly problematic if all of a sudden we don't have the right amount of snow at the base, so by changing Saturday night to more of a show factor, we've given ourselves way more flexibility."

Additional details of the event are still being ironed out, according to sponsor Gibbons Hospitality.

"Sue's basically given us carte blanche to have some fun with it, get people out and create that real sense of community through art, music and sport," said CEO Joey Gibbons.

The company has financially supported WSSF for the past three years, and Gibbons estimated this year's investment will be at least $50,000.

"We've had a really good year and business has been fantastic, so I think it's important that other businesses give back to events that celebrate the community, and this festival is one of those things," he added.

Check back in with www.wssf.com for the full schedule and more details on this year's program as they become available. The 21st annual World Ski and Snowboard Festival runs April 8 to 17.