documentary shot over two days on location at alpine hut in the selkirk mountains
Aug 15, 2012 9:00 PM By: Lynn Martel 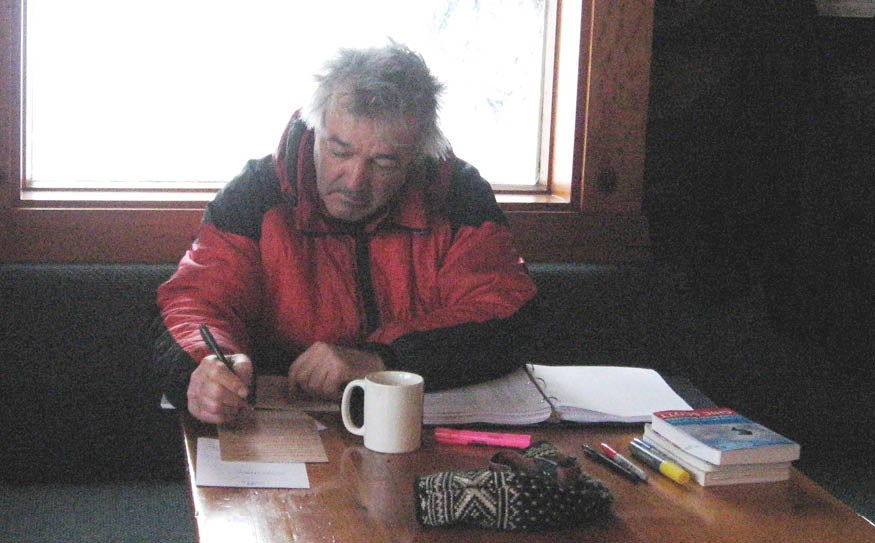 man of the mountains Chic Scott is the subject of a filmshot at the AO Wheeler Hut in the Selkirk Mountains. Photo suBmitted

Nestled in the bosom of old-growth cedar forest and steeped in history, Canmore photographer Andrew Querner decided the hut was the ideal setting for him to extend his storytelling passion into the art of filmmaking.

His subject, Chic Scott, has spent the last quarter-century recording the history of climbing and ski mountaineering in Canada, including stories set amidst the wild glaciated peaks of western Canada's Selkirk Mountains, home of Wheeler Hut. Author of nine books and an accomplished climber and backcountry skiing route pioneer, Scott is revered as the Canadian mountain community's most cherished storyteller and historian.

And that's exactly why Querner chose to profile Scott in his 12-minute film, The Gift.

"I was inspired to make this film because I thought that Chic's life story was quite interesting, to me anyway," Querner said. "He has by no means led a conventional life and at times one might even have called it a fringe existence. But what is truly inspiring to me is the conviction in his voice when I hear him speak about the arts — literature, music, film. Clearly, he holds these things close to his heart and when you speak with him, he always returns to them. As a believer in the arts, this had an effect on me. That, combined with his penchant for thoughtful story telling made him a natural subject for a film."

Set to a backdrop of fresh powder snow glistening in frosty winter sunlight and the enchanting piano melody of Bach's Goldberg Variations, Scott shares some opinions and reflects on the meaning of the stories he's devoted his life to recording and publishing.

"Canada probably has more mountains than almost any nation on earth," Scott says in his rich, distinctive baritone voice. "When I discovered the mountains, almost all the mountaineering history, the books, the adventure, climbing books were all about somewhere else — Europe or the Himalayas. There was very little on our own community. I suppose I've done my best to rectify that."

With The Gift, Querner has elegantly celebrated Scott's dedication and accomplishments with very much the same sense of care and commitment that Scott has always exhibited in his meticulous researching and eloquent writing. An accomplished still photographer for the past seven years, Querner has shown himself to be exceptionally adept at capturing the more sensitive and intensely emotional side of the mountaineering experience. With the advent of inexpensive, good-quality video cameras and viable platforms for sharing one's work via the Internet — The Gift can be viewed at https://vimeo.com/46244677 rich the idea for a film profiling Scott evolved organically.

"In part, I was inspired because I had this opportunity to play in a new medium which is exciting," Querner said. "Chic and I had been toying with the idea for a while. I sat down with him on at least two occasions simply to talk. This was my way of figuring out what the story was actually about. The more time I spent with him the more I realized that his experiences with literature and art seemed to shape the person he became even more than his mountain experiences. I knew that the film needed to be more than a collection of random thoughts and stories. Eventually, we honed in on the subject of history and community."

Thoughtful and poetic, the film was shot over two days last January. Deciding the storyline should be built around an interview with Scott, Wheeler Hut — named for the ACC's co-founder who was an esteemed surveyor and mountaineer — was the ideal location.

"This area seemed like a natural place to have a conversation about mountains and history," Querner said. "Also it was place that held significant personal meaning for Chic."

With the camera lingering for quiet moments in the serenity of the backcountry as Scott chops firewood, flames lick at the glass door of the woodstove and Scott breaks trail through virgin snow pillows bordering the creekbed, the film exudes a reflective, unhurried pace refreshingly opposite to that so often portrayed in the contemporary narrative of mountaineering stories.

"I knew I wanted to deliver the main ideas through the subject's voice," Querner explained. "So the film had to be built around an interview. We hear the story in Chic's words. And visually, I was interested in communicating through a stripped down aesthetic which was simply a natural extension of my own photography. There's lots of breathing room in the film, which I hope compliments some of things we hear him talk about."

To assist him with the shoot, Querner enlisted two close friends; outdoor photographer Kari Medig and Revelstoke, B.C.-based cinematographer Alexander Lavigne. Apart from the hurdle of sourcing a free, publicly available version of the soundtrack, the biggest challenge of the project was expressing the essence of Chic's prolific career in twelve minutes.

"By far the biggest challenge was distilling the breadth of Chic's life experiences into something that was digestible in a short film," Querner said. "I benefitted greatly from Chic's ability to tell a good story. The next biggest challenge was actually taking the raw interview and crafting into something semi-cohesive. The most challenging part about editing was figuring out how much I could strip away while still maintaining a tangible narrative."

In the end, Querner's first real filmmaking project grew as a "product of instinct and learning on the fly." While he harbours no commercial aspirations for the film, he is hopeful it will accepted as a Banff Mountain Film Festival finalist.

"I hope that viewers come to appreciate the thoughtful kind of record keeping that Chic does so well," Querner said.

"For those who are perhaps not so familiar with our mountain climbing history and culture, I hope they can begin to get a sense of how it contributes to our collective identity and that as a nation, we are actually pretty good at it."