Accommodation for Olympic volunteers in Sea to Sky corridor now in hand
Nov 6, 2009 6:44 AM By: Clare Ogilvie 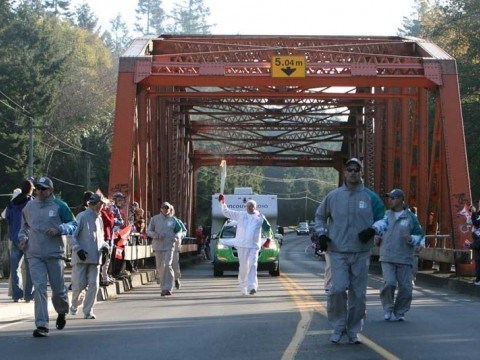 With 99 days to go until the Olympics come to Vancouver and Whistler there is both a sense of accomplishment and a realization that some of the most challenging times still lie ahead.

"The thing that we have to avoid is to become complacent because we have had success," John Furlong, CEO of the 2010 Vancouver Organizing Committee said this week.

"We are no where nearly finished. We have 90 to 100 days of seriously difficult work in front of us that will require the best effort that you can imagine."

Included in that work is the more than $100 million worth of overlay being erected around the sport venues to ready them for competition and spectators.

There are also still staff to be hired and a few volunteers to put in place.

For the most part the thorny question of where to house the close to 6,000 Olympic staff and volunteers in the Sea to Sky corridor has been solved. They will be staying on cruise ships in Squamish, at Quest University, in Whistler and Squamish hotels, and in people's homes.

"This is an important milestone for the organizing committee to reach and frees up any remaining accommodation inventory for visitors with approximately 100 days to go before the start of the Games," said Jacqui Murdoch, VANOC's vice president of services and accommodation.

"It's an economic generator for the community and it's a goal we couldn't have reached without the amazing support of residents in the region who volunteered to open their homes to people from around the world and to community leaders who helped support our other accommodation solutions."

The Homestay program is providing 590 beds and is still accepting applicants. The cruise ships will house 1,100 people. Hotels and condos in Whistler will cater to 2,000 people, while hotels in Squamish will look after 300.

Three modular temporary housing units will be placed on the tennis resort property at 4500 Northlands Boulevard in Whistler as well. The three units will provide 268 beds for use between January and March. The Whistler Games Service Centre will be located at this site. Along with housing part of the workforce, this location will be used as a uniform and accreditation centre, the Homestay reception centre for Whistler and a workforce dining area.

VANOC recently received a temporary commercial use permit from the Resort Municipality of Whistler for the Whistler Games Service Centre and related housing.

It was clear to see that passion in the last days as the 2010 Torch relay began in B.C., said Furlong.

Even communities with small populations crowded to see the torch pass by.

With the relay came protests, but said Furlong: "People, as we have always said, have the right to express their views and express it whatever way they like, but (protesters need) to show respect for the other people who are there to enjoy themselves and to not ruin the experience or frighten people who have spent many years waiting for that one moment."

With the end in sight Vancouver and Whistler have a chance to be recognized as hosting the best Games in history.

"It is in our hands to get into that category of best ever, to achieve a standard that really takes your breath away," said Furlong.

"...What is standing between where we are today and an extraordinary Olympic experience for the world is the effort that communities put in and the way the citizens of Whistler and Vancouver embrace the Games."

More tickets for Vancouver events go on sale Saturday, including some to the gold medal hockey games. To find out more go to www.vancouver2010.com.