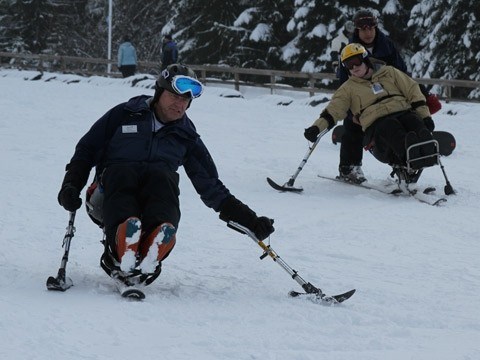 Far from the deserts of Afghanistan, where a roadside bomb shattered his pelvis, tailbone, heel and ankle, American army medic Brian Roberts lets out a whoop as he glides down a snowy slope near Whistler's mid-station.

A burly man of 37, the Washington native is balanced on a sit ski - a single-blade ski apparatus that offers mobility to those with limited control of their legs. Behind him, a handful of Whistler Adaptive Sports Program (WASP) volunteers make sure he stays balanced and uses the equipment properly. It's been less than a year since Roberts' three-vehicle convoy hit hidden explosives in Helmand Province, changing his life plans for good.

"I was bedridden for four months and then I was able to sit up in a wheelchair and then I started getting mobile but I had a total of 14 surgeries and I'm not sure how much it cost to fix me but it was a lot," he said during an on-hill interview.

"Now it's 10 months later and I'm already skiing, so there you go."

Roberts is part of a contingent of American soldiers brought to Whistler through a partnership between WASP, Whistler Blackcomb and the American Friends of Whistler (AFW) facilitated by long time second homeowners Barbara and Bill Norman. Over the past two years soldiers have come to learn to kayak in the summer and ski in the winter. For all, it's the first bit of effortless movement they've experienced since their injuries occurred.

"For them it's just realizing that things they used to be able to do that now post-injury they can still do, be it a little bit differently," said Barbara, who acts as den mother during the trips.

"But it allows them to be engaged in more activities that they enjoyed before or maybe a brand new one but realizing that there is more to life that they can access and they can still do.

Over a three- to four-day stay in Whistler, the soldiers are coached on how to use the ski equipment and exposed to a dose of local culture. Their experiences are kept intimate through the Normans, who, with a little help from the Delta Suites and local restaurants, open their home to the crew and make sure they're properly fed. The reprieve from military hospitals and recovery units is always welcome. The psychological benefits of regaining movement and independence are enormous.

"I really believe sport can be a major catalyst for change," said WASP executive director, Chelsey Walker. "It gives the ability to take on a challenge in a supportive environment and learn some new skills that are applicable not only in the field of play but that translate across your life."

Going from fully mobile to a wheelchair, accompanied by persistent pain and numbness is a trying experience any way you slice it. For soldiers, relearning how to function outside of the comfort and routine of the barracks can be an additional challenge, but Roberts said the change in environment is entirely therapeutic.

"There was a moment where I was just in the zone and I was floating, it was wonderful," he said of his first moments on the slopes.

"I wasn't having to use my arms to move and I could move just by shifting my body weight and it was like floating on a cloud.

"As soon as I go back, there's no shutting me up about this, this is just phenomenal. I want to make it bigger and better and let all these guys get out here and experience it and know that you can do something besides just sitting in a wheelchair, sitting in your room.

"It's one more step, it's 'Hey, I can do this.' It's just one more positive affirmation in life, OK - I can ski, what is the next thing I'm going to do? I'll try waterskiing maybe."