After 39 emergency call types are downgraded, Response times for non-urgent calls are slower
May 14, 2014 10:03 PM By: Alison Taylor 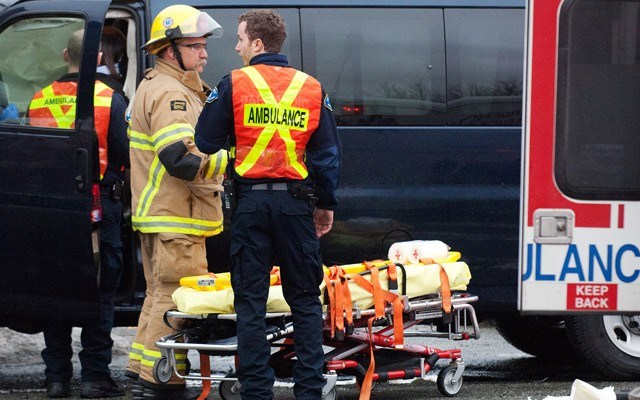 on the scene First responders are speaking out about recent changes to BC Ambulance. File Photo

Sea to Sky first responders are speaking out about recent changes to BC Ambulance, as pressure continues to build on ambulance services in the area.

The changes have included downgrading some 39 types of ambulance calls from urgent to routine, which is creating more patient wait times for non-life threatening calls and exacerbating an already stressed service in the corridor — a service that sees one of the two ambulances in the area often on a six-hour turnaround driving patients to hospitals in Vancouver.

Local firefighters are feeling the brunt, as they respond to non-urgent ambulance calls and see the lengthening wait times first hand. Frustration is mounting.

"It's not just about downgrading of calls. It's about the level of resources in our community.

"We've seen a distinct rise in call volumes due to medical calls and that's partly the success of festivals and events, there are more tourists here, there's a lot more demand and that demand for high service levels from the international guest further puts challenges on that."

The recent downgrading of calls from Code 3 (lights and siren) to Code 2 (routine) for 39 types of calls comes after a review of the Resource Allocation Plan (RAP) from BC Emergency Health Services. Minor falls, for example, are now Code 2.

A few months ago an American tourist fell down some steps in the village, blowing out his knee, receiving lacerations on his face. Firefighters responded, but they are not allowed to transport patients to the Whistler Health Care Centre.

After 35 minutes with the ambulance still a no-show, the American family put their father into their vehicle and drove him to the centre for care.

"I'm not sure why a patient would be transporting themselves to hospital; certainly we do our best to get to folks as quickly as we can to match the type of responses that they require," said Kelsie Carwithen, manager of media relations with BC Emergency Health Services. "It's the first I've heard of it in Whistler."

Carwithen said its review of the changes to date show that calls have been coded correctly.

"So, of the hundreds of thousands of calls we respond to each year, these are absolutely extremely rare cases where the patient would be waiting an exorbitant amount of time for an ambulance to respond to them," she added. "This is not the norm. And a few cases certainly don't mean that the system is broken."

The RAP changes come as a way of ensuring the most severe cases get priority. An industry expert who reviewed the RAP process is fully supportive of the changes.

"The methodology has a strong foundation in robust clinical evidence of the actual medical needs of British Columbia's EMS patients, and is superior to the processes used in many major EMS systems," said former paramedic Allan Craig in his report.

Provincially, BCAS is responding to urgent calls one minute faster. Non-urgent calls, however, the routine calls, are about six minutes slower.

The Whistler specific stats were not available before press time.

Whistler is keen to get a handle on the situation. That's one of the reasons why it's embarking on an extensive review of its $3.4 million Fire Rescue Service.

"They're really stripping it back and looking at it right from the basics," said Mayor Nancy Wilhelm-Morden.

In the meantime, however, Whistler's mayor is joining the chorus of other B.C. mayors calling for a full review of the provincial ambulance service.

A full review of the ambulance service was one of 10 recommendations to come out of the BC Mayors' Caucus in Cranbrook last month.

The mayors, explained Wilhelm-Morden, see the coding changes as another classic case of downloading from higher levels of government. Unlike ambulance service, a provincial responsibility, firefighting is a municipal responsibility.

"Our wait times have gone over an hour in some cases," he said. "So it's been erratic as to how much wait time there would be."

It is, said Corrigan, putting "inordinate pressure on our firefighters."

Kirkwood too is hearing about that pressure first hand.

Whistler's firefighters have been first medical responders for more than 20 years, first entering the voluntary program in 1992.

And while they can have a direct impact on those serious, urgent calls, there is no onus on them to attend non-urgent calls.

"We certainly appreciate the efforts of the fire department but for the majority of those non-urgent calls, they are not required to attend, not at all," said Carwithen. "Their attendance does not have any impact to patient outcome."

Mayor Corrigan is using every avenue to get his concerns across — lobbying government, putting pressure of the MLA's, confronting BC Ambulance.

"In every avenue we're trying to find a way to get people aware of it, to make the public aware of the problem, and to force the government to deal with what we think is the reality of under service in regard to ambulance services across the province," said Corrigan.

"We think that there are not enough ambulances to be able to ensure that we have an acceptable level of service."