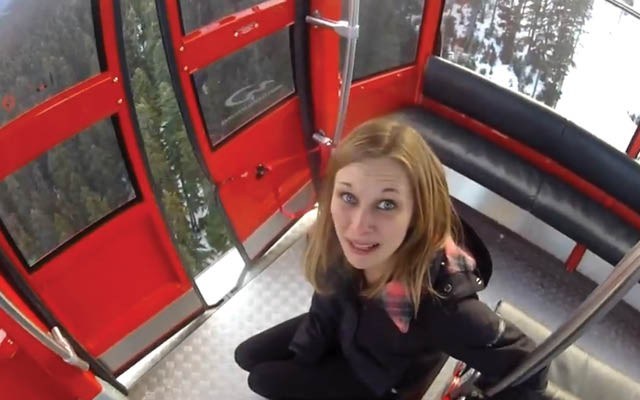 The Whistler woman who allegedly helped a 25-year-old man BASE jump out of the Peak 2 Peak Gondola in February has formally been charged.

Greg Diamond, the lawyer for Kathleen Elizabeth Adams, appeared on her behalf by phone at the North Vancouver Provincial Court on April 2 — her first court date. Adams was not required to appear in person.

Adams is charged with mischief to property over $5,000 and willfully resisting or obstructing a peace officer. The allegations have not been proven in court.

She is co-accused with the alleged BASE jumper Graham Shawn Dickinson.

Videos shot during the stunt show the jumper riding in a Peak 2 Peak gondola cabin with a woman. The videos, which were posted to YouTube, show the pair working together to prepare for the jump. Both of the people involved used video cameras to record the jump. The woman is identified in one video as Kat.

The videos show the jumper leaving the gondola, deploying his parachute then landing safely more than 400 metres below in the Fitzsimmons Valley. The RCMP and a Whistler Blackcomb patroller tried unsuccessfully to find the BASE jumper.

According to Whistler Blackcomb, more than $10,000 in damages were done to the gondola system during the jump — the doors had to be forced open and held apart in order to exit the gondola.

A YouTube account holder named Graham Dickinson posted an initial video on Feb. 8 and a user named “Graham D” published a second video of the incident from another camera on Feb. 9.

According to the RCMP, Adams was 23 at time of the BASE jump incident. Police describe Adams as a Whistler resident originally from Ontario.

Court records indicate another hearing for Adams is scheduled for May 7.