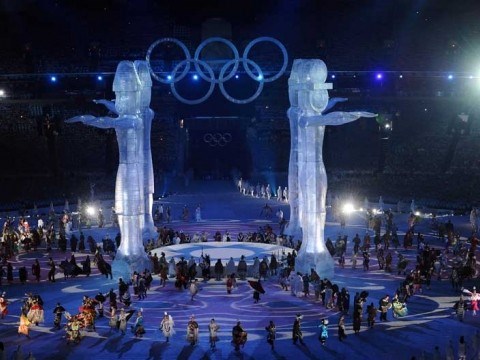 The Olympics are normally an opportunity for the host city to welcome the world. But for Levi Nelson, the 2010 Games provided a chance to welcome Canada.

Nelson, 26, represented the Lil'wat Nation at the opening ceremony for the 2010 Olympic Winter Games. He welcomed the world in English and Ucwalmicw, the traditional Lil'wat language, and wasn't just targeting international visitors.

Arms outstretched, his voice amplified so that all of B.C. Place could hear him, he welcomed the whole world, including the host country, to his people's traditional territory. And he loved it.

"I still get a lump in my throat thinking about it," he said in an interview. "It was a huge responsibility on my part and yeah, I think the fact that I spoke it in my own native language made it that much more powerful and reached people so much further, on a deeper level, rather than the English version of it."

Nelson is normally a youth ambassador at the Squamish Lil'wat Cultural Centre, leading visitors on tours of the facility that aims to educate people about the First Nations who've lived in Sea to Sky since "time immemorial."

Also a part-time actor, Nelson got his first big role when show producer David Atkins Enterprises put a callout for actors from Mount Currie. Nelson auditioned for the role alongside two other people from his community: Vania Stager, who became his understudy, and Clint Andrew, who heads up Mount Currie's radio station.

The audition, which took place back in August, forced all candidates to memorize their lines in their traditional languages. Nelson says he's more fluent at reading the language than understanding it when it's spoken to him. He had to work at it leading up to the ceremony.

"I was given my lines that I had to memorize for the audition," he said. "It went from reading them on the page to simply saying them to eventually working up to feeling what each word meant in its own individual context.

"I think constantly in English, and trying to translate that into Ucwalmicw took a few weeks to learn every word."

Nelson's task was made all the more daunting by the shocking death of Councillor Bruce Edmonds, a Lil'wat artist and up-and-coming leader in Mount Currie. It rocked the whole community but for Nelson it was personal: Edmonds was his uncle. He found out just after the final dress rehearsal for the big show.

"I was leaving the stadium when I received the news that my uncle had died," he said. "He was one of my favourite uncles, my dad's brother, and so I was in shock when I heard at first."

Nelson's partner was driven down from Pemberton at 10 p.m. to be with him in his Vancouver hotel room. He talked to his mother, Councillor Lois Joseph, on the phone and tried to draw out of her what was happening. For a time he considered dropping out of the ceremony, but both family and professional duties kept him going.

"I was talking to some other cast members about how, as an actor, you show up to set no matter what," he says. "I went on to say, you go to work even if someone passes away. You show up to work and after that, so to have my words shoved back in my mouth was kind of a slap in the face.

"I could have went home and dropped out of the opening ceremonies but my uncle Bruce, who was working for years on various projects dealing with VANOC and the 2010 Opening Ceremonies, I knew that he would have wanted me to be there."

Nelson took the stage for the start of the ceremony alongside the other Four Host First Nations and was the first to offer welcome. For about 45 minutes after that, he and the assembled aboriginals danced a welcome for the athletes as they entered the stadium. He remembered his uncle and his grandmothers as he danced.

"Just acknowledging the fact that my uncle had left us and dancing out there made it more of a spiritual experience," he said. "It definitely meant a great deal to everybody that was involved."

One of the most potent moments of the ceremony came right before it started, when he and other assembled First Nations held a circle in their private dressing room. A girl from the Yukon wandered over to the dressing room and thanked them for having her on their territory.

"That's what we do in our culture when you visit another First Nations community," he said. "You acknowledge the elders and the people of the community and you thank them for having us on your land.

"I'm not a political person but I sort of joke about how great it was to finally give Canada a proper welcome."