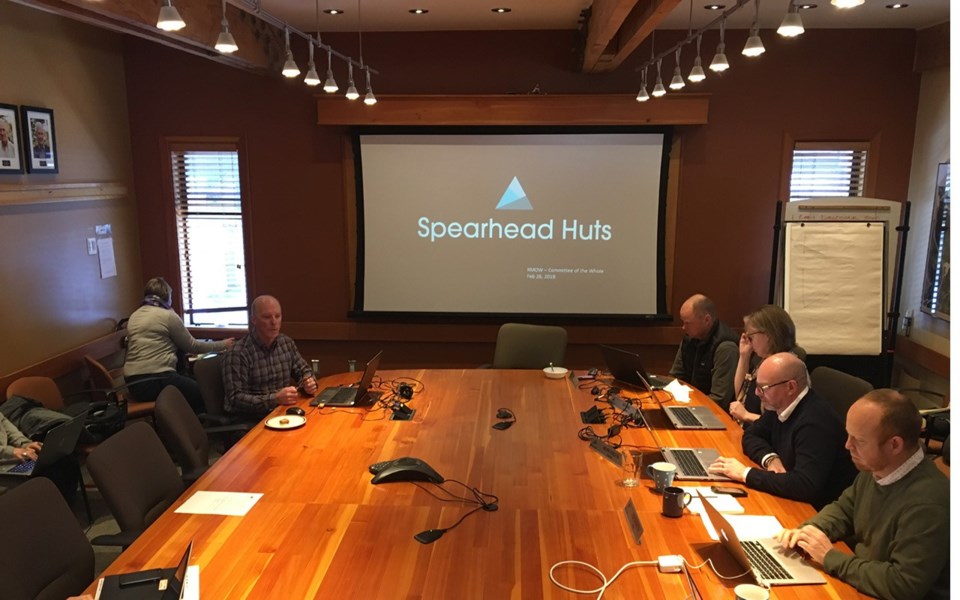 Progress continues to be made on the Spearhead Huts project, with the first of three huts targeted to open in August 2019.

"We'll start construction, ready to go basically May 1, getting everything up there to start on the interior finishing and finishing up all the panelling," said Jayson Faulkner, chair of the Spearhead Huts Society (SHS), in providing an update on the project to the Committee of the Whole on Feb. 26.

"Our goal is to be open by August, so if we don't get hosed by the weather we feel pretty confident we'll be up and running with people actually staying overnight in August."

The online booking system for the huts still needs to be launched, and a proper opening ceremony will be held as well, Faulkner added.

Concerns about the weather are not unwarranted—construction on the first hut at Russet Lake (known as the Kees and Claire hut) was hampered last summer by another brutal B.C. wildfire season.

"We lost about five weeks of construction (in the) summer, because we had all the heavy-lift helicopters disappear as the province burst into flames," Faulkner said.

"So we were really stuck. We would have likely been open this January if we hadn't lost that time."

The second hut, at Mt. Macbeth, is already fully funded thanks to a $1.5 million donation from Vancouver couple Andrea and Brian Hill, with construction planned for the summer of 2020.

"We haven't retained our architect just yet, but the design has already been started," Faulkner said.

"We hope we can build that in one season because it's about 22 beds, it's quite a bit smaller, it will be more compact without a basement facility in it, and the systems will be simpler and so on."

The third hut at Mt. Pattison is still a few years off, with no planning or fundraising taking place just yet, Faulkner said.

The concept of a hut system along the picturesque, 40-kilometre Spearhead Traverse just west of Whistler in Garibaldi Provincial Park was first introduced more than a decade ago.

More than 160 people have volunteered for the project on site in recent years, along with more than 70 professionals—the 236 volunteer days add up to more than $100,000 in labour costs, Faulkner said, adding that more than 60 companies have also donated cash or in-kind goods.

While progress has been mostly steady, there remain some outstanding issues with summer access and parking, Faulkner said.

As it stands right now, hiking to Singing Pass from the valley floor is a daunting task, and there is also no adequate overnight parking for backcountry hikers in the valley, Faulkner said.

"And so what the outdoor clubs are proposing is some access to the (Independent Power Project)—build a parking lot where the IPP project is in some form, and then use that as an access road."

Whistler currently has six designated parking spaces for overnight hikers, "and total hut capacity with the three huts will be 95 people," Faulkner said.

"So on a given night up there, when they're all built, there could be 95 people staying up there overnight ... so clearly additional overnight parking I think is important, as well as trying to figure out a way to make that access better."

The SHS is looking for volunteers (cooks in particular), as well as any cash or in-kind donations. Find more at www.spearheadhuts.org.