Second World War may have thwarted earlier development of a ski resort at Whistler
Oct 26, 2007 2:52 AM By: Bob Barnett 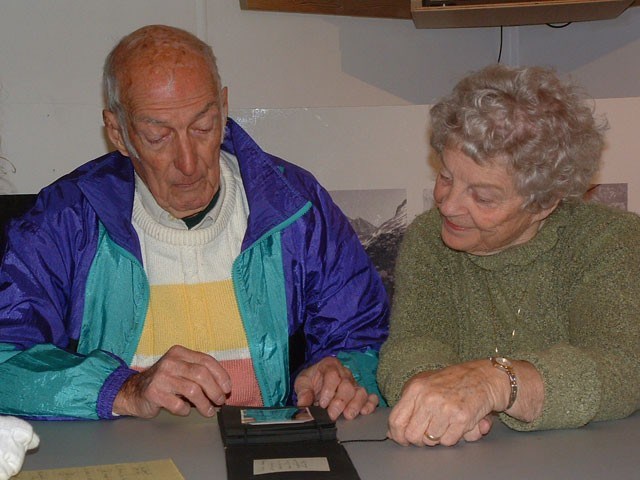 Whistler’s origins as a ski area are generally traced back to 1960, when a group of Vancouver businessmen, high on optimism after the Squaw Valley Olympics, went looking for a place to host the 1968 Winter Games.

It’s not that no one skied here prior to the creation of the Garibaldi Olympic Development Association and Garibaldi Lifts Ltd. Indeed, Stefan Ples and a few others from the Tyrol Ski Club were skinning up the mountains and sliding down for several years before Franz Wilhelmsen started cutting runs and building lifts on Whistler Mountain.

And as early as the 1920s, residents of Alta Lake used skis to get around the valley and enjoy a little winter recreation.

But the first exploratory effort to develop a ski resort in the Whistler area may have been George Bury’s 10-day ski tour in May of 1939.

Bury, now 93, was in Whistler last week to present the Whistler Museum with a photo album of pictures taken on that 1939 trip. He plans to be back again for the 2010 Olympics.

“I’d looked at maps of the area and thought it was worth exploring for ski development,” Bury said Friday while explaining the details of the trip at the museum.

An Austrian named George Eisenschimel, who had escaped his home country just before Hitler annexed it, had traveled through Switzerland to South America and then on to British Columbia. Eisenschimel was interested in developing a ski area in B.C. so he contacted Bury, the four-way (jumping, cross country, slalom and downhill) champion of Western Canada in 1938. Friend Howard Hamil was also part of the trip.

A fourth skier — a man who thought he’d been to the Alta Lake area previously but who turned out to be just as new to this section of the Coast Mountains as Bury Eisenschimel and Hamil, was supposed to be the guide for the 10-day trip. Bury couldn’t remember his name.

On a clear, crisp morning the quartet flew from Sea Island in Richmond to what they and their pilot thought was Alta Lake. A closer examination of the photos last week suggests it was more likely Cheakamus Lake they landed on.

Regardless, the group was left on the shores of the lake, with their eight-foot skis and 70-pound packs, and spent 10 glorious, fair-weather days exploring the mountains in the spring. They hiked up, heated some snow to make water, skied down and then looked for another ridge to climb to.

Their last run was down the face of The Barrier. They skied as far as the snowline, then hiked down through the rubble to the PGE railroad. They had calculated it was a Wednesday, the day the train returned from Prince George to Squamish. When they finally heard the train coming, Bury stood out in the middle of the tracks and flagged it down.

“It stopped about three feet in front of me,” Bury recalled, “and the engineer said, ‘What the hell are you doing?’ I said, ‘We’re looking for a ride back to Squamish.’ So he said, ‘Get the hell on.’”

Bury grew up in railway yards — his grandfather was head of security for CPR President William Cornelius Van Horne and later started the Trans-Siberian Railway — so he wasn’t afraid of standing in the PGE tracks and waiting for an engineer to stop the train.

Any hope of that May 1939 ski trip leading to development of a ski area at Alta Lake was sidetracked four months later. At the start of the Second World War Bury joined the RCAF and became a radio and communications specialist. He worked in radio, radar and microwave technology the rest of his career, in the RCAF and with Rockwell International. The training took him to jobs around the world, including installing B.C. Hydro’s microwave system on Black Tusk.

Bury now lives on Manitoulin Island, on Lake Huron, Ontario. He still skis, when it snows on the island, and he still has his ski instructor’s licence, the 38 th ever issued in Canada.

He never heard from Eisenschimel again after that 1939 trip, although he knows the Austrian wanted to return to his home country when things stabilized.