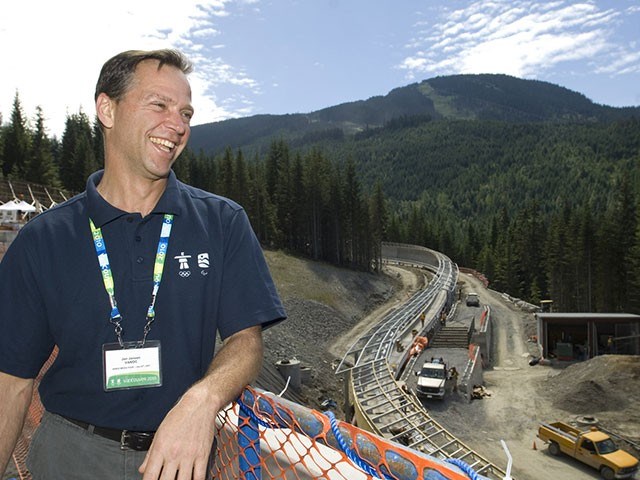 In 2010 Whistlerites won’t have to wonder what it feels like to hurtle down an Olympic luge track or race through the forest on state of the art cross-country trails.

They’ll have already had the chance to experience it first-hand.

Olympic organizers for the 2010 Games reiterated at a recent media tour that the Whistler competition venues will be ready by the end of the year, giving Canadian athletes the edge over the competition, and the public a chance to see what the multi-million dollar playing fields are all about.

“It’s always been part of the operational strategy for the Games to run these venues right down to Games time,” said John Furlong, the CEO for the Vancouver Organizing Committee for the 2010 Games (VANOC).

“We’re opening them so our athletes can get on them.”

Athletes like Pierrre Lueders, Canadian bobsleigh champion, with Olympic gold and silver medals to his name, who is hoping to get on the world’s newest sliding track in a few short months.

“There’s aspects of this track that I’ve never seen anywhere,” said the Olympian at the site of the new track.

Before setting off on a five-hour venue tour, Dan Doyle, executive vice president of venue construction for VANOC, reminded reporters of his prediction on the same tour a year ago when he said he would deliver the venues on time and on budget.

“I was confident then,” he said. “I’m super-confident now.”

That confidence comes from the sheer volume of on-the-ground work, which has taken place in the last year, changing the landscapes of the area forever.

And, if there’s one common theme running through these venues, it’s that they’re situated in some of the most spectacular mountain scenery in the world.

Though just on the outskirts of town, the Whistler Nordic venue feels as though it’s light years away from civilization.

U.S. Nordic combined Olympian Bill Demong described his first impression of the venue as something out of Lord of the Rings.

The old road to the venue climbs endlessly up into the Callaghan Valley, flanked on both sides by tall trees. This road is the secondary access road; Olympic spectators will travel to the site on a four-lane paved boulevard.

And then, it finally opens to the site.

A concrete shooting range for the biathlon is nestled under a forest of trees. Competitors will stop and aim at tiny targets 50 metres away and then continue on the competition trails, which disappear into the vast surrounding forest.

At least 15 km of trails wind through the area.

“You can also walk out along the trails and get real close to the athletes,” said John Aalberg, VANOC’s director of Nordic Sports.

The two-time Olympian, who designed the course, called it a “very tough course, very demanding for those guys.”

To put that in perspective Aalberg said in the longest event, the 50 km men’s mass start, the uphill portions of the trail add up to the equivalent of skiing the Dave Murray Downhill (the men’s alpine downhill course) twice — straight up.

The 12,000-person biathlon stadium is located right behind the shooting range. It will be made up of temporary bleachers and standing room.

A short walk along a portion of the 15 km competition trails, which rise and fall much like the natural terrain of the Callaghan Valley, ends at the jaw-dropping site of two competition ski jumps carved into a mountain with tight trees flanking either side.

The site was chosen and developed in part because there is little wind to affect the jumpers.

A 360-degree scope of the site reveals blue sky, far-away mountain peaks, dark green treetops and not much else.

The main day lodge for the venue is just getting out of the ground and was not a part of the tour. While the competition area is expected to be complete by December, the day lodge will not be finished until next summer.

At first glance it could be a giant roller coaster snaking down the side of Blackcomb Mountain.

On closer inspection, however, those steel “roller coaster” rails are the forms for a weather protection system covering what it touted to be one of the most technical and challenging sliding tracks the world has ever seen.

Work is continuing from the bottom up on this track, which will offer competitors and spectators views of the peaks of nearby Rainbow and Sproatt Mountains.

The 1,700 metre track twists and turns down the mountain. Spectators will be able to watch the action from various points along the side.

Jan Jansen, director of Whistler Outdoor Venues, said 17 of the 23 sections of track are done.

Under the concrete track runs 100 km of pipe for refrigeration. Organizers are expecting to begin making ice in mid to late November with the possibility of putting athletes on the track the following month.

Bobsleigh Olympian Lueders said there was a time not too long ago when Canadian athletes had to travel to Europe to practice. Now there will be two tracks (the Whistler track and one in Calgary) for athletes to train and compete. That, he said, should raise the profile of the sport and get people interested.

Whistler Mountain above Creekside is almost finished its facelift for the Games, just in time to begin snowmaking in 12 short weeks.

Millions of dollars have been funneled into the alpine skiing venue. The men’s course is the Dave Murray Downhill, the women’s is the re-engineered Franz’s Run.

“The course still incorporates its legendary steep sections,” said Whistler’s Brad Lennea, who competed in the Torino Paralympics in 2006.

At the timing flats, the finish line for the courses, the area is flattened to make room for 7,600 spectators during the Games.

Whistler’s old landfill is starting to look a lot like the beginning of a new neighbourhood.

Though no vertical construction has taken place to date, the rough outline of what is to come is evident on the ground.

This $131 million non-competition venue is primarily the responsibility of the municipality through the Whistler 2020 Development Corporation.

But VANOC is spending $37.5 million on the site too.

Of that money $6.5 million will be transferred to First Nations, as agreed during the Olympic bid.

“We’re in the process of working with the First Nations to define exactly what it looks like but it could prospectively be a direct housing legacy where we would build housing on site that can be relocated off-site to the First Nations,” said Mark Cutler, VANOC’s director of Olympic villages development. “It could look like a cash contribution.”

The village, which will turn into a new employee housing development after the Games, will be made up of 160 townhomes, 75 apartment units and 55 apartment rental units.

During the Games 2,750 athletes will be housed on site.