Flushing the details out of Whistler's $4.5M bathrooms 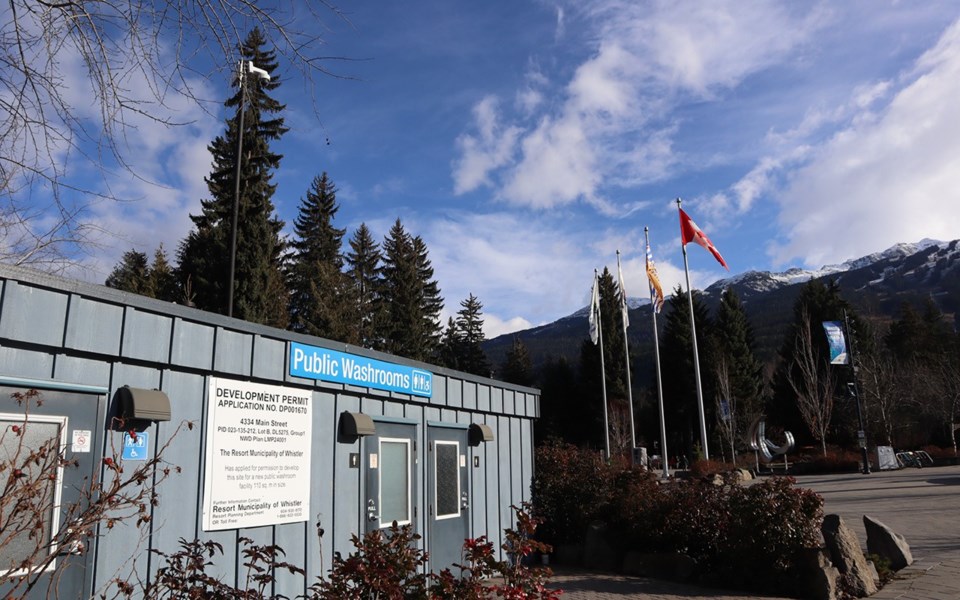 BATHROOM BREAK The Resort Municipality of Whistler has budgeted $4.5 million for three bathroom facilities in Whistler this year: one replacing the temporary facility at Olympic Plaza (pictured), one at the Gateway Loop and one at Lost Lake PassivHaus. Photo by Braden Dupuis

A tendering process for a project to build three public washroom facilities in Whistler Village attracted no bids within the Resort Municipality of Whistler's (RMOW) originally budgeted amount of $3 million, forcing the municipality to rethink the project—which led to a new budget of $4.58 million, according to Mayor Jack Crompton.

The original estimate of $3 million was low, and a new budget was built after an "extensive overview" that is in line with best practices, the mayor said, adding that the RMOW is confident the new total is reasonable.

"A cost estimate based upon preliminary designs was received, [and] cost estimate accuracy was then confirmed by an independent private builder," he said.

"The design has been vetted through the RMOW's advisory design committee whose membership includes several community members including architects and builders, [and] the budget includes professional fees and construction contingency."

And for those who will scoff at the seemingly exorbitant pricetag for three washroom buildings—one at the Gateway Loop, one at the Lost Lake PassivHaus and one to replace the temporary facility at Whistler Olympic Plaza—that's just the cost of doing business, Crompton said.

"Building costs have escalated across the region. The building boom is great for our housing inventory, but it does present its own challenges," the mayor said.

"Public infrastructure is built to a different standard than a residential home. It's important to note that washrooms and kitchens are the most expensive part of any building. These washrooms each will host somewhere in the range of 707,000 people a year; they must be durable."

With the RMOW budget bylaws and five-year financial plan set to be deliberated at the first council meeting in December, a new tender for the project will not be issued until after that.

If the project is tendered in early 2020, it should be completed by the end of the year.

"We continue to look for savings. To my friends who say they can build for less, I say submit a bid," Crompton said. "It's an open tendering process. We welcome bids from our local contractors, and hope we'll get them."

In the case of the controversial Gateway Loop project, which saw a similar jump in price after an initial tendering process, no local contractors bid on the work, meaning labour had to be brought up from Vancouver, which padded the final contract cost.

While the new budgeted amount is currently proposed to come 85-per-cent from provincial Resort Municipality Initiative (RMI) funding (designed to support tourism in resort communities) and 15-per-cent from the general capital reserves, Crompton said he will be recommending to council that all $4.58 million come from RMI.

While that means the project won't have any impact on taxpayers, the total represents more than half of Whistler's yearly RMI take ($7.45 million in 2019).

Is council comfortable assigning so much to one project?

"Yeah—washroom infrastructure is crucial to offering a tourism experience that is positive. Some of the complaints that we receive around people's visit to Whistler are the state of the washrooms," Crompton said.

"The washrooms we have simply do not meet Whistler's standard for durability or quality. We also are not providing the number of public stalls that meet the needs of our visitors."

Asked to weigh in, Lauren Everest, senior manager of communications with Tourism Whistler, said that public washrooms are "definitely a gap" in Whistler's resort experience.

"The washrooms that are currently available to the public are in need of updating, and the need for more public washrooms throughout the Village is something we hear regularly from guests," Everest said in an email.

Councillor Ralph Forsyth, who oversees the RMOW's finance and audit portfolio and spoke often of fiscal responsibility during the 2018 election campaign, said the washrooms are costly, but necessary.

"They're expensive, but I think that's what the RMI funds are for, right? Is for that kind of tourist infrastructure," Forsyth said, adding that RMOW staff has put some work into redesigning the project to be more cost effective (some changes include removing covered bike storage areas, more economical windows, and a simplified assembly process for the roofs).

"I'm going to talk to staff and make sure that we're getting the best value for every piece of it that we can get, but at this point, I'm not going to vote against the budget because of this," Forsyth said.

Further, RMI funds are very prescriptive in what they can be used for, Forsyth said.

"I get that it's a lot of money ... but it is money that is earmarked for these specific purposes, and for not much else, you know? We can't spend it all on fire thinning, or we can't spend it reducing your property taxes, either," he said.

The public is welcome to provide input by email, at open houses, or by calling him, Forsyth added.

"It's easy to scream on Facebook, a little harder to call your city councillor and actually say 'hey, here's where I think you can save money,'" he said.

"We're taxpayers too. We're not pissing the money away just for fun, you know what I mean?"

Residents have until Dec. 3 to submit comments by email at budget@whistler.ca.

More fast facts on the project from the RMOW, received after Pique’s press deadline:

• The three new washroom facilities will add the equivalent of nearly 30 new toilet and urinal stalls in Whistler.

• Feedback from the Recreation and Leisure Master Plan and Parks Master Plan “Outside Voice” engagement opportunities, as well as other on-going feedback, has been that the washrooms at the PassivHaus are highly oversubscribed.

• Two portable washrooms were added to the PassivHaus site the last two summers and received considerably more use than anticipated.

• The existing washrooms within the PassivHaus are closed for up to 100 days per year thus no washroom service is available at these times.

• The washrooms in the portable trailer at Whistler Olympic Plaza (WOPL) are approaching the end of their lifespan.

• The majority of washrooms in the village are under private ownership, and the washroom experience varies considerably.

• Many washrooms are located far inside public and private buildings and are hard to find.

• Comments about washroom facilities come in both the winter and summer from both regional and long-haul destination guests.

• The current Olympic Plaza washrooms are cleaned four times per day in summer.

• The proposed buildings need to withstand Whistler’s heavy snow loads, and they also need to meet the design guidelines for Whistler Village.

• Flexible design will allow portions of the washroom buildings to be closed during slower demand periods, which will reduce on-going cleaning costs.

• Each building will have several inclusive/universal compartments and a family compartment.

• The washrooms will be built with off-the-shelf lumber and other readily available and non-proprietary products using common construction techniques to ensure a competitive bidding process, while also being built to last for many years.

• The washrooms will be built to Step 2 energy efficiency standards—which means they will be 20 to 40 per cent more energy efficient than the B.C. Building Code.

• Servicing is in place for the WOPL and PassivHaus facilities. At Gateway Loop services need to be extended a short distance to the building site.

• Fittings and equipment (millwork, accessories include wall-hung toilets for ease of maintenance).