Following in the footsteps of Hans Gmoser

Mountain writer Chic Scott returned to heli-ski pioneer’s roots in Austria in preparation for biography
Nov 16, 2007 8:23 AM By: Lynn Martel 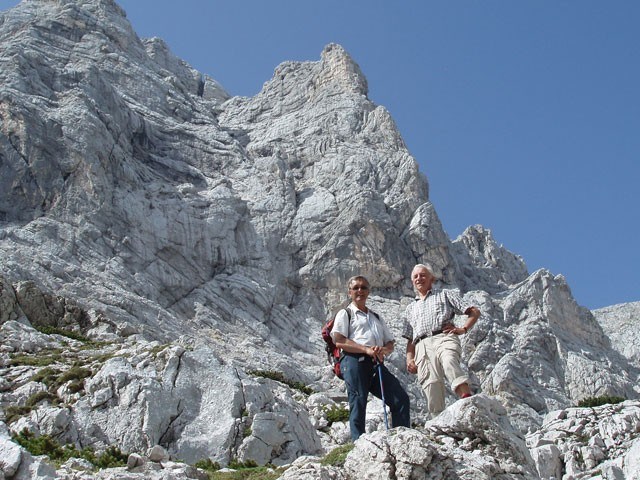 Gmoser's Life Chic Scott (left) and Franz Dopf, one of Hans Gmoser's earliest climbing partners, stand at the bass of the 2442-metre Spitzmauer in Austria, where Gmoser and Dopf made their first technically challenging rock climb in 1950. Photo by Roberta Dopf (courtesy of Chic Scott).

Among the most memorable days mountain writer Chic Scott enjoyed during three months in Austria last summer was an afternoon spent sitting at the base of Spitzmauer, a 2,442-metre limestone pyramid in the Eastern Alps.

Gazing up at the steep faces and sharp ridges from the Prielschutzhaus mountain hut with Scott was Franz Dopf, who nearly 60 years ago climbed the challenging north face with Hans Gmoser.

One of the first to share a rope with Gmoser, who after emigrating to Canada in 1951 pioneered climbing routes, ski traverses and launched the helicopter skiing industry with Canadian Mountain Holidays, Dopf shared stories about their adventures as young men. Among them were climbing experiences that led to Gmoser and fellow Austrian émigré Leo Grillmair making the landmark first ascent of the south face of the Rockies’ Mount Yamnuska in 1952, shortly after arriving in Canada.

“That was their Yamnuska,” Scott said. “The rock on Spitzmauer is almost identical to Yam. Grey and yellow, moderately loose limestone. They were very at home on Yamnuska.”

Basing himself from Traun, where Gmoser and Dopf grew up, Scott was compiling research for the biography he’s writing of Gmoser, who died following a cycling accident in July, 2006.

“My favourite place came to be a park bench in front of the church where Hans was an altar boy, beside the school he attended,” Scott said.

Scott viewed the giant iron and steel works factory employing thousands where Gmoser apprenticed to become an electrician. He cycled along the Danube to visit Gmoser’s birthplace, and was welcomed as family at Gmoser’s brother’s house. Familiarizing himself with the mountains of Gmoser’s youth, Scott climbed Austria’s highest peak, 3,798-metre Grossglockner, as well as 2,995-metre Hoher Dachstein.

He visited the first hut Gmoser stayed in while on a holiday weekend with a community priest in January of 1947, and where he first experienced the alpine.

A highlight came when Scott retraced a weeklong solo hike across the Totes Gebirge, a 50-kilometre long plateau with a high point of 2,515 metres.

“I hiked for a week across a small mountain range, going from hut to hut, just as Hans did in 1948,” Scott said. “I carried a copy of his journal with me, where he’s being very eloquent, and falling in love with the mountains. I sat out and looked at the same views he did. You could say I was following in the footsteps of Hans Gmoser.”

Shortly after Gmoser’s death, his wife Margaret handed Scott all of her husband’s journals, correspondence and personal papers, including speeches and commentaries from skiing and climbing films Gmoser toured around North America with in the 1950s and ’60s to promote his business.

Since then Scott has scanned 600 photographs, from a two-year-old Gmoser wearing a Tyrolean hat, to skiing with Ingemar Stenmark and Spain’s King Juan Carlos, to receiving the Order of Canada from Governor General Jeanne Sauvé.

A meticulous researcher, Scott has interviewed some 40 people who were close to Gmoser, including ski clients Lloyd Nixon, Bob Sutherland and Deiter von Henning, who participated in the very first helicopter skiing week in 1965 in B.C.’s Bugaboos.

For his part, Scott recalled first meeting Gmoser in 1963, not long after discovering his own love for mountain adventure, helping Gmoser and Grillmair tow a disassembled stove into the Alpine Club of Canada’s Stanley Mitchell Hut.

“Hans and Leo took turns carrying the frame on their backs, it had to weigh 150 pounds,” Scott said. “That night, when myself and Donnie Gardner and Gerry Walsh went to bed — we were 17, 18 — we listened to Hans play the zither, and Hans and Leo yodelling.”

“Hans would come out to the foyer at intermission and socialize,” Scott recalled. “By then he was king of the mountains. The biggest thrill was if he remembered your name. Little did he know that 40 years later I would be writing his biography.”

But first Scott had to climb his own mountains.

In 1960, Gmoser and five others made a much publicized attempt to ski the high glacier route between Lake Louise and Jasper. Departing Kicking Horse Pass, the team laboured as far as Saskatchewan Glacier, where after enduring storms, crevasse falls and lost food caches they were forced to abandon their attempt.

“It was an absolute epic,” Scott said. “And it was the greatest disappointment of Hans’s life.”

While Gmoser built the world’s first and still largest heliskiing operation, in 1967 Scott teamed up with Charlie Locke, Don Gardner and Neil Liske to ski 300 kilometres from Jasper to Lake Louise. After three weeks of sunny skies and starry nights, the young Canadians succeeded.

“One of our great dreams was to complete what Hans had begun,” Scott recalled. “We learned from all Hans’s mistakes, from the size of their packs, to the size of the team.”

Following their slide show, Gmoser greeted the group with one word.

For the next quarter century, the two men lived worlds apart.

“I was part of the Calgary Mountain Club — Brian Greenwoood’s team — and he was Hans and the Euro heliski team,” Scott recalled. “We were rivals.”

In 1988, Scott left a secure University of Calgary job to pursue guiding. In 1991 explore magazine published his first article on guiding history. After failing his ski guide’s exam in 1993, Scott tasted his own disappointment, a moment he now reflects upon as, “the best thing that ever happened to me.”

As Scott built his writing career, peaking with the 440-page Pushing the Limits , an anthology of Canadian mountaineering published by Rocky Mountain Books in 2000, Gmoser became one of his biggest fans.

“Hans was always supportive in every way,” Scott said. “Hans liked the fact I did a lot of digging. He had become a mentor, and we had become good friends. Although the book will probably do well, this is not primarily a commercial project. It’s a tribute, a memorial to Hans. And it’s the only one.”

According to Gmoser’s wishes, and his family’s, no mountains, backcountry huts or awards will be named for the man who so inspired Canada’s mountain community.

“It’s a great honour to be asked, it’s a great responsibility, and I feel a great pressure to get it right,” Scott said. “From my perspective, I want to write a book Hans would like.”