Forty years of defining moments from incorporation to today 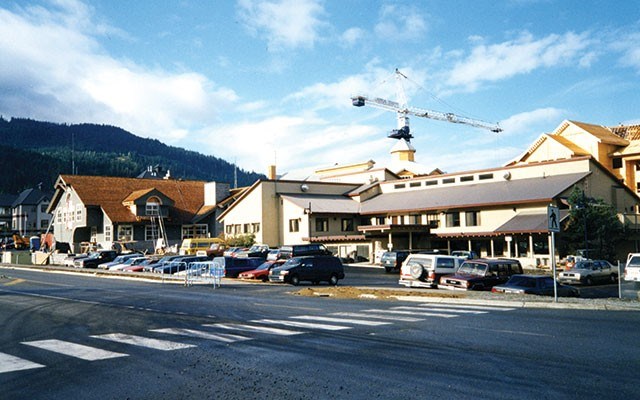 Up it goes Whistler's municipal hall while under construction. Photo courtesy of Whistler Museum and Archives society

Whistler's first official baby, born just weeks after the small community was incorporated as Canada's first "resort municipality," remembers when her little hometown finally made it on the map.

Sara Jennings, born Oct. 13, 1975, five weeks after the Resort Municipality of Whistler (RMOW) was "born," said she was about 12 years old and on a family trip to the U.K. They were at a horse jumping show, or something of the sort. And there, thousands of kilometres from home, she saw someone walking around in a "Whistler" T-shirt.

"My sister and I were just blown away," she said of her amazement. "For years we had to explain where we were from to people in Vancouver and here we were seeing evidence that... wow, Whistler is getting known, it's getting bigger, things are changing. I thought that was really cool."

On Sunday, Sept. 6, Whistler will celebrate its 40th anniversary in style. For longtime residents, however, its short history is defined by moments and decisions that have shaped not only Whistler, but the people who live here, too.

There were just 350 registered voters in that summer of 1975 during Whistler's first election campaign. Nancy Wilhelm-Morden was one of them, though she was squatting illegally on Crown land at the time, while working for a blasting crew with the department of highways, all with her eye on getting into law school. Still, no matter that she was living on the fringe, she was still a resident and able to cast her vote.

From squatter to mayor in 40 years.

"Who would have thought?" she laughed. "It was the land of opportunity in many respects but in my case, with (husband) Ted and I, we were just kids when we arrived in Whistler back in the day. I was 18 years old. And so, we literally grew up with the town of Whistler growing up; it's been a really unique perspective."

The defining moment in the municipality's history, she said, was the decision to build a pedestrian-oriented village in the centre of the valley, on top of the old garbage dump no less.

It wasn't just that the new council had the foresight to build the village, which the mayor calls Whistler's "crown jewel," it was that they had the moxie to believe that it would actually work.

"This idea that a village could be created and would attract visitors from all over the world and deliberately aim for that... it was very far-reaching," said Wilhelm-Morden.

"I think it's been highly successful. It's done exactly what it was meant to do, to be the vibrant heart of the valley, yet nature is so readily accessible."

Bob Dufour can't help but view Whistler's past through the lens of Whistler Blackcomb. Dufour, WB's vice president of mountain operations and maintenance, has worked for the company through every president, from Franz Wilhelmsen to today's Dave Brownlie, seeing the changes firsthand.

At the time of incorporation, Whistler had little more than a handful of ski lifts — six perhaps, said Dufour, some of those long forgotten now in a rainbow haze — the Blue Chair and the Orange Chair and the Olive Chair.

If you wanted to ski the peak, you had to hike there; if you wanted to get to the top of the Red Chair, be prepared to weather a 40-minute ride; and there was very little in the way of grooming.

"You didn't come here to get pampered," he said. "You came here for big skiing."

For Dufour, a ski instructor from the Laurentians who read about Whistler's snow in the Montreal Star and decided to turn his wheels west, it didn't get much better than that.

His defining moment came in 1986, when Intrawest bought Blackcomb Mountain, which had opened in 1980.

"Intrawest coming in '86 I think made the biggest impact to a resort that already changed dramatically in 1980 (when Blackcomb opened and lifts started operating from the budding village)," said Dufour.

"They completely redesigned the mountain in one summer. That was an amazing undertaking."

The 7th Heaven T-Bar was moved to the Horstman Glacier. A high-speed quad chairlift, one of the first in Canada, was put in at 7th Heaven. Two more quads were added as the Wizard and Solar Coaster. Skiing had never been as fast or as convenient. The peak was no longer this mythical place in the clouds.

Intrawest had upped the ante in Whistler.

Whistler Mountain, which was privately owned, responded to that development in kind with the Whistler Express Gondola in the village — one of the biggest ski lifts projects of its time.

It was game on.

And Dufour was at the heart of the competition.

"As the place was changing, I was changing as well... It fit right in to my personal development."

Andy Petersen has been here for all of it — the opening of Whistler Mountain, the incorporation of the municipality, breaking new ground in the village, the Intrawest days, the arrival of the Peak 2 Peak. He first arrived in 1962, settling permanently in '68.

A lot of "locals" over the years, he said, resented Whistler's growth; it was happening too fast and there were just too many changes for many of these people who had escaped to the mountains.

Petersen, however, accepted it.

"I could always see it coming," said Petersen from his home on Alta Lake Rd., Whistler's first "neighbourhood."

"When you open up a resort, it'll keep on growing."

Fitting, then, that on the eve of its 40th anniversary Whistler is on track to break more records for room nights sold in the resort this summer — June and July have already been the busiest on record. Summers are now busier than winters and this "ski resort" is now a mountain biking mecca too.

As for this idea of "local" — a badge of pride for people who make their way in this transient town — Jennings dismisses that being local is about longevity in Whistler.

Get ready to celebrate "local-style" this weekend at the 40th anniversary celebration of the Resort Municipality of Whistler.

For a rundown of the weekend's events, check out the Pique's arts and music pages.