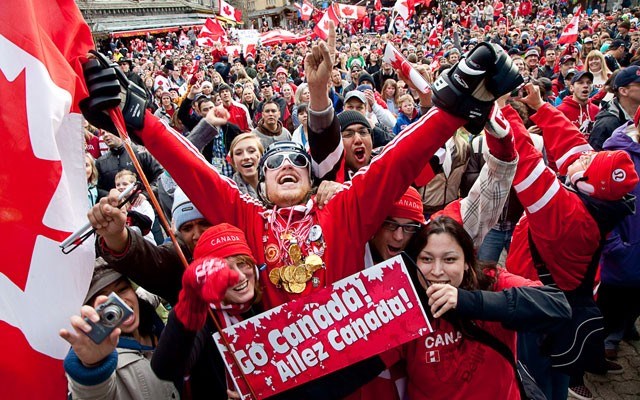 Go Canada! Allez! There will be celebrations a-plenty in Whistler during the 2014 Winter Olympics at Sochi, Russia. Photo By Brad Kasselman/ <a href="http://coastphoto.com/">Coastphoto.com</a>

Whistler's Olympic legacy will loom large this February, with the municipality and local bar community gearing up for more than two weeks of celebrations marking the return of the Winter Games.

The Resort Municipality of Whistler dedicated $80,000 in Festivals, Events and Animation funds for special programming throughout the village during the Sochi Winter Games, taking place from Feb. 7 to 23.

Whistler Mayor Nancy Wilhelm-Morden said it is important to uphold Whistler's Olympic legacy and create a festive atmosphere in the resort four years after hosting the Games here.

"What better place to watch the Games than at a former Games venue?" she said. "We were the mountain host community and we're bringing back some of the feel from 2010."

The municipality will use the funds to host a series of events throughout the Games, with activities or events available for viewing each day of the Olympics. Details of what the festivities will look like are still being finalized.

The pre-recorded Feb. 7 opening ceremonies will be broadcast on a large-screen TV at Olympic Plaza, with the time still to be determine. Taped sports events will also be replayed there every day from 9 a.m. to 9 p.m.

Due to the extreme time difference in the Russian resort, most events will not be shown live publicly, said Wilhelm-Morden. Many of the high-profile events will air after midnight in B.C., for example, the men's hockey gold medal game, which is scheduled for 4 a.m. on Feb. 23.

"You sort of use everything that's going on in the world to add to the event you're putting on in your business, and I think the times (of events) are going to hurt our sports bar, Tapley's," Gibbons said. "We would do better if we could show it live."

The Gibbons-owned bars will be showing events on tape delay, he added, similar to what his establishments do for other international sporting events, like rugby, Australian rules football and soccer. Gibbons said he explored the option of having bars open at 4 a.m. for live events during the Games, but he wasn't sure if it would attract enough patrons to be worthwhile.

He said his staff will be encouraged to foster a celebratory atmosphere and support all of Canada's Olympians next month, but that before Whistler hosted the Olympics in 2010, the Winter Games played less of a significant role in the resort during the historically busy month of February.

"We're trying to get involved with it and really trying to play off the last Olympics being in our community, but the reality of it is when you look back to previous Olympics before we had (the Games) here, it's pretty much a non-event," said Gibbons.

"In Whistler we've constantly got different corporate groups coming to town, there are different themes happening as far as who is here each week, so we'll keep adapting to that, but at the same time celebrating the Games just as if it were a Canucks game or something like that."

Among the other municipally run events throughout the Games will be free family après festivities, scheduled from 4:30 to 6:30 p.m. on Feb. 10, 12, 17 and 19 at Olympic Plaza, featuring sports demonstrations and live music.

Those itching to learn how to ride luge can attend the Lay It Down with BC Luge events at Olympic Plaza on Feb. 10, 12 and 15 from 4:30 to 6:30 p.m. with hands-on instruction from BC Luge coaches and athletes. Between Feb. 19 and 22, also at Olympic Plaza, the public can see if they have what it takes to be a bobsledder, pushing the sled from a standing start. The event runs from 2 to 6 p.m.

Olympic Plaza will also continue to be home to free public skating, street hockey games and a Cheese! Box Olympic-themed photo booth on a daily basis throughout the Games.

Whistler freeskiing legend Julia Murray will host the We Are All Olympians Breakfast at Olympic Plaza on Feb. 15 at 9 a.m. Pancakes and bacon will be served while supplies last, with a suggested donation of $5.

The closing ceremonies on the night of Feb. 23 will be marked by a special Fire and Ice show at Skier's Plaza as well.

With controversy already swirling around the costly Sochi Olympics, including the international community expressing concern over public safety and Russia's abysmal record on LGBTQ rights, Wilhelm-Morden said Canadians should be proud of Whistler and Vancouver's hosting of the 2010 Games.

"Compared to what's going on at Sochi, you can look back on the Vancouver-Whistler Games and see that it came in with a relatively reasonable budget, and aside from a little bit of disruption the very first day or two, and of course the death of (Georgian) luger (Nodar Kumaritashvili), aside from those things the Vancouver-Whistler Games were really well organized, they came off well and I think all Canadians were really proud," she said.

The RMOW will be posting a full list of Olympic-themed events in the resort on www.whistler.ca in the coming weeks.