Four-car pile up closes highway near Whistler for hours 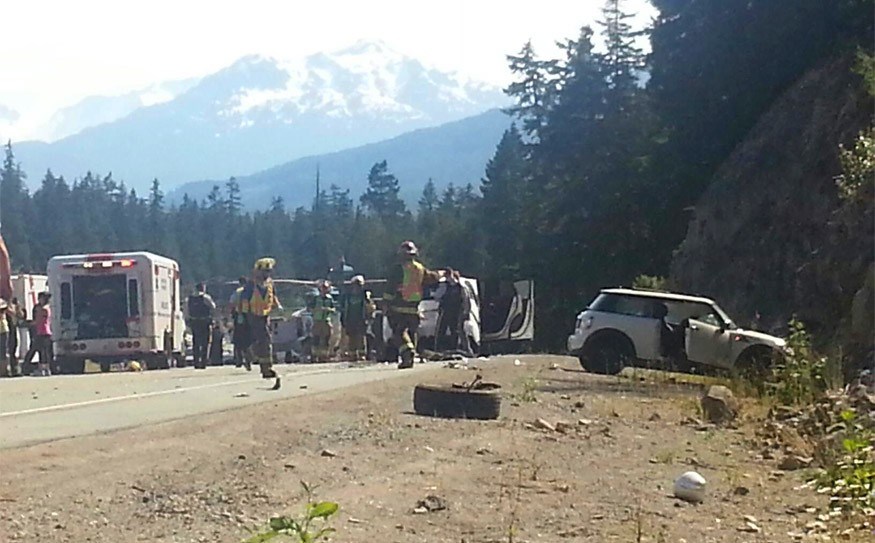 The accident, just north of Brandywine Falls sent three people to hospital and injured nine others.

The accident, which happened around 4 p.m. July 19, closed the highway in both directions for just over two hours. Alternating traffic in single lanes continued into the early evening.

RCMP officers from Whistler and Lower Mainland Traffic Services attended the accident along with the BC Ambulance Service (BCAS) and the Whistler Fire Department.

The motorcycles were northbound on Highway 99, and passed a stationary unmarked police car conducting traffic enforcement. The constable then merged onto the highway and paced the motorcycles to keep visual contact with them.

Due to traffic and public safety concerns, the police officer decided not to activate his emergency equipment, but radioed ahead to Squamish detachment officers, who then set up a roadblock south of Squamish on Highway 99.

"They may not realize it, but these motorcyclists are lucky we pulled them over," says Sgt. Peter Thiessen, of the Lower Mainland District Regional Police Service.

"Motorcyclists should be aware of the risks and of how easily they could lose control of their bikes. Too often we find drivers may not be familiar with the weight or capabilities of their bikes."

There is one motorcycle fatality so far in RCMP policed areas in the Lower Mainland in 2012, and six overall in B.C. to date this year.

That compares to nine motorcycle deaths in the Lower Mainland last year and 37 deaths overall in BC in 2011. Most of the fatalities in 2011 occurred during warm, dry weather from July through September.

During this incident the drivers ranged in age from 25 to 47. Each driver was issued an Excessive Speed violation ticket of $483, with one driver also receiving a second fine of No Driver's License of $276. All five motorcycles were impounded for seven days; the bikes ranged from a 1981 Honda to a 2010 BMW.