Community at odds as to whether Whistler Presents is a boon or a bane
Oct 19, 2011 9:00 PM By: Stephen Smysnuik 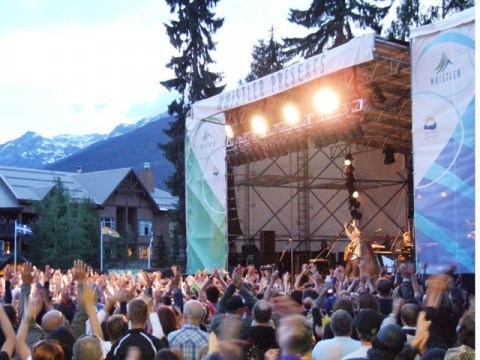 The Whistler Presents free concert series is getting mixed reviews.

While the RMOW is citing the program as a success so far, others, including Jazz on the Mountain at Whistler (JOMAW) founder and organizer Arnold Schwisberg, said free concerts destroy any chance of a ticketed event succeeding at Whistler Olympic Plaza (WOP)

The commercial failure of the Labour Day weekend jazz festival was due in part, Schwisberg claimed, to the "sequential and conspicuously advertised free concerts at WOP."

"The RMOW set a tone I don't know can ever be overcome, especially in the context of Whistlerites' disinclination to pay for live music," Schwisberg wrote in an email to Pique .

Schwisberg contiuned, "There is no doubt in my mind that it was an error to have scheduled sequential and conspicuously advertised free concerts at WOP; that it compromised and dampened ticket sales at JOMAW and will affect all attempts to program ticketed shows there."

Likewise, the scrim, or barrier, for ticketed events cannot mask the music or the video screens and people can enjoy the full concert experience just as well inside the barrier as outside.

As a result, he said, JOMAW will now schedule paid performances at indoor venues until the public has been re-educated that WOP is a not a free venue, but it could take years to get to that point,

"I'd propose an ad campaign not promoting free concerts, but helping people realize why free concerts are NOT sustainable and are NOT good for the musicians or the community," Schwisberg wrote. "It's one thing to have free shows in a festival context alongside ticketed events. But the stand-alone series of free concerts has not established a favourable precedent."

This issue has become a hot election topic among municipal candidates. In a lengthy Facebook thread on the 2011 Whistler Election page, incumbent Ted Milner and candidates Dave Buzzard, Steve Andrews and Jay Rolston, among several others, commented that the $2.9 million was spent without any clear indication that Whistler will see a return on that investment.

Councillor Ted Milner posted on a Facebook feed that the free concert model was a one-off event and would not be returning next year. He said the money spent this summer demonstrated no return on investment.

"You bring Sam Roberts Band from Montreal for $100,000 and he takes it back to Montreal. What does it achieve?" Milner told Pique . "Does that bring someone to the resort next year? Because Sam's not here. I just don't see it."

Both Milner and Schwisberg say that representatives from Feldman and Associates - the booking agency that includes several of the 2011 Whistler Presents artists, including Barenaked Ladies, Colin James and Tom Cochrane - told them that free concert programming is a mistake and a detriment to future ticketed programming. A spokesperson for Feldman and Associates could not be reached for comment by press deadline.

Milner's calling for an economic development plan for what the RMOW does with the Resort Municipality Initiative (RMI) funds and to take a "hard look at demonstrated returns on investment." A component of that would be to spend less on entertainment by promoting local (and inexpensive) entertainment, rather than an emphasis on out-of-town entertainers. When a bigger, more expensive act comes to town, it'll have to be ticketed.

(RMI funding is a provincial government program that provides resort municipalities funds to invest in programs that will increase visitation and hotel occupancy in B.C.'s resort communities.)

But Mayor Ken Melamed said that Whistler Presents and its umbrella program, Festivals, Events and Animation (FE&A), is a response to a lack of promoters throwing shows at the plaza.

"If there was an abundance of paid concerts that were willing to come in and use the plaza, then we wouldn't have to put on free concerts," he said.

He said that the RMOW did not invent free concerts in Whistler. The TELUS World Ski and Snowboard Festival did it long before the municipality dipped their toes into programming.

"We're not fixated on free concerts but our mission is to drive visits to the resort," said Melamed.

"From that perspective, it was a great success.

"We can start to ask questions about whether it's good or bad. I say it's good. If people are prepared to bring in concerts and pay us for the use of (Whistler Olympic) Plaza, and that's going to drive visits to the resort, then we don't need to invest in the (FE&A) program."

The RMOW spent just over $2.9 million of RMI money, which has to be approved by the province, on the FE&A program. This included the cost of the free concerts, street entertainment throughout the village, marketing for Whistler Presents and equipment rentals.

According to an RMOW spokesperson, 2011 is being treated as the foundation year, the testing year for a full five-year plan that will use a combination of free and ticketed events. Because the RMI program is itself an experiment, the municipality is uncertain of future funding. According to the RMOW spokesperson, the RMI funds are being used now while they're still available, to get the program up and running. By 2013, the plan is to have operations running smoothly, with alternative revenue sources locked down for 2014 and 2015 so it's a self-sustaining program.

The RMOW is now consulting with 10 entertainment industry experts, as well as 10 stakeholders from within the community, to gather new ideas and execute the 2012 Whistler Presents edition based on the lessons learned in 2011. They're looking to book musical acts that will appeal to a variety of tastes and attract incremental visits to the resort under the assumption that this will translate to incremental overnight hotel bookings.

Tourism Whistler's (TW) data on just how influential the FE&A program has been in terms of visitor satisfaction or on visitor room nights won't be available until December, but TW's senior manager of communications, Breton Murphy, said the 2011 summer has been in the top three on record in terms of visitors, noting anecdotally that visitor feedback to FE&A and Whistler Presents has been very positive.

"There's no doubt that it was a major contributor to adding to the vibe of the animation in the village this summer, and no doubt has had a positive impact on visitor experience this summer," said Murphy. "Now we're just trying to determine to what degree, and to what degree it may have impacted overnight bookings."

He added, "What will be important moving forward is what will be the best mix and the best fit for the village and for the visitors that will have the best results for us in terms of driving visitors."

But Melamed said that while Whistler Presents might drive room nights, it's really about creating that value add for residents, visitors and families who have come to almost expect something to be happening in Whistler.

In this regard, Melamed said it's been a "tremendous success."

But he carefully added, "The caveat I would have is this is year one. We need to do a lessons learned and understand how we would move forward to build on this success."

But Milner's not convinced. He points to the Whistler Film Festival - with which he admits he has a conflict of interest because his wife, Jane, is the festival's director of development - brings in measurable results, about $10 million in business, to the town.

"But if you pay Tom Cochrane to come for one evening, what does that get you? I don't see anything, to be honest," he said.