Partnership between Tourism Whistler and municipality will see additional access points installed over the next two years
Jul 8, 2018 5:30 AM By: Megan Lalonde 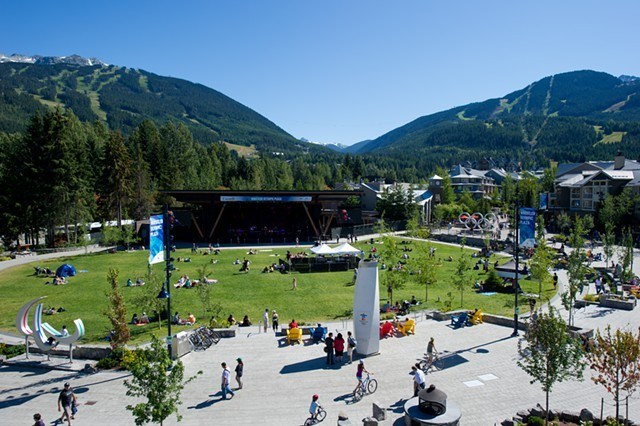 Free WiFi is now available in Whistler Olympic Plaza, making it the first internet access point of several that will be installed throughout the village over the next two years. File photo

Do you know that feeling when you've surpassed your phone plan's monthly data allowance? All of a sudden, it's impossible to search for directions, post on social media, or even send a Facebook message without running into a coffee shop for WiFi (or forking out a small fortune for extra gigabytes).

Fear no more, data junkies—thanks to a partnership between Tourism Whistler and the Resort Municipality of Whistler (RMOW), connecting to the internet will no longer be a problem for anyone spending time in Whistler village.

The public now has access to free WiFi in the village, with the first install live and available for use at Whistler Olympic Plaza and within its immediate vicinity—an important service for the resort's guests, explained Tourism Whistler president and CEO Barrett Fisher in a release.

"We hear time and time again, through our visitor surveys, that free WiFi is not only a priority for our guests, but it's really an expectation," she said. "Not only is the addition of free WiFi good news for our guests, it also means that they'll be able to share their Whistler photos and help spread that positive word-of-mouth messaging that we know is so vital in today's competitive landscape."

The project will see additional access points installed in stages over the next two years. Once complete, there could be up to 30 WiFi access points powering 10 hotspots in key gathering locations throughout the village, according to the release.

This year, locations will include Whistler Conference Centre and Village Square, in addition to the already up-and-running access point at Whistler Olympic Plaza.

Tourism Whistler and the RMOW were first made aware of the need for free resort WiFi through customer feedback gathered during Tourism Whistler's annual research surveys, she explained. As a result, that need was marked as a priority during the resort's Economic Partnership Initiative (EPI) planning meeting.

"Coming out of the EPI, a resort-wide Technology Advisory Committee was then struck, at which time the RMOW and Tourism Whistler moved this initiative forward," Wilhelm-Morden added.

The project was made viable by Whistler's existing fibre optic infrastructure—a legacy of the 2010 Olympic and Paralympic Winter Games.

The installation will be a joint effort between Tourism Whistler and the RMOW, while both the RMOW and Tourism Whistler's IT teams will co-manage the support and maintenance of the system.

To access the free WiFi network, users can select "Whistler WiFi" from their device, where they will then be taken to a splash page and asked to accept the terms and conditions.

Bandwidth speed will be capped at 1Mbps (megabits/second) for each user—"not ideal to stream movies but more than enough connectivity to post pictures, view maps, send email and check your digital pages," stated the release.