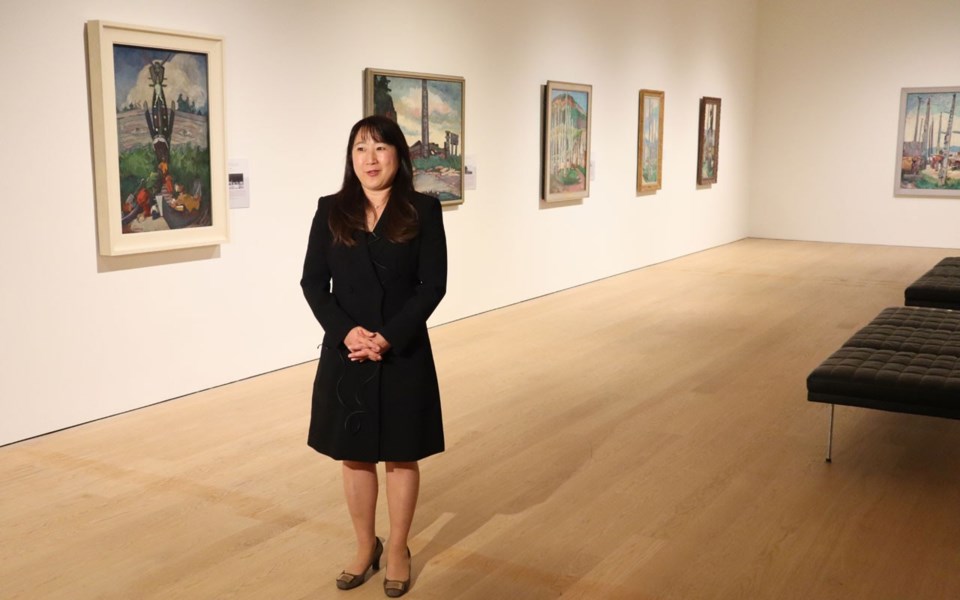 Her quest: to find the exact locations depicted in Carr’s work from 1910 to 1911. “When I got to Crécy-en-Brie, I’m sure I stood on exactly the same spot on the canal [as shown in the Carr painting Crécy-en-Brie],” she says. “My husband and I were able to take photographs and really confirm the sites because a lot of the paintings that exist in collections are [named] ‘house in France,’ ‘building in France,’ they don’t really have specific locations.”

Both Crécy-en-Brie and Bridge’s photo are now on display as part of Emily Carr: Fresh Seeing—French Modernism and the West Coast, a new exhibit that opened at the Audain Art Museum on Saturday, Sept. 21.

That independent research adds new information to the scholarship of one of Canada’s most influential artists. It also expands the scope of the museum’s work.

“This is by far the largest exhibit the museum has put on in its three-and-a-half year history,” says Curtis Collins, director and chief curator of the museum. “It’s a great milestone in this institution’s brief history in a number of ways. The quality of research both Kathryn and Kiriko [Watanabe, curator at the museum] have put into this … It marks where this institution is going.”

Shortly after Watanabe began her job last July, Collins assigned her the task of organizing “a major Emily Carr exhibition” for the following year.

After studying Carr extensively, she began to narrow down the exhibit theme, and recruited Bridge, a curator emerita of the Royal British Columbia Museum. They decided to examine the 16 months Carr spent in France, studying at the epicentre of modern art, and the ways it transformed her work.

Bridge headed off to France to retrace Carr’s step, while Watanabe went to Haida Gwaii to speak to some of the artists connected to the paintings Carr created there after her trip.

“From a curatorial perspective, I’m in awe of both Kiriko and Kathryn and what they’ve done here,” Collins says, standing in the gallery during a media preview on Friday, Sept. 20. “I really think this exhibition has broad appeal on the academic, historical, curatorial level, but [also] for the general public where they can make these assessments in terms of the arc of differences in Emily Carr’s work in just three years that would really set the tone in many respects for the rest of her career.”

The exhibit is broken down into three different sections. The first features watercolours painted before her trip and those same paintings, recreated in oil, after the trip. The differences are remarkable; pre-France Carr’s work was muted, rooted in realism with an earthy palate. After France, the colours are bold and brilliant with the scenes interpreted through an impressionist lens.

“In this section, I encourage people to walk back and forth to make close observation of what has changed in over a six-month period,” Watanabe says.

Another room takes visitors through her transformation in France, starting with a tiny canvas that demonstrated her tentativeness to Brittany, France, one of the brightest pieces in the show that depicts sun beaming down on a house while three women rest in its shadow.

There are also paintings from Carr’s teachers in France, including Henry Gibb, John Duncan Fergusson, and Frances Mary Hodgkins.

“The paintings are borrowed from international collections to show you paintings from artists that she worked under,” Bridge says. “She was very influenced by a man called Henry Gibb. He was an expatriate English artist. He had been living in Paris for quite some time.”

Carr grew so close to Gibb and his wife that she decided to follow them when they moved to Brittany. “She lived on the beach, a small hotel in Saint-Efflam,” Bridge says. “The Gibbs lived about half-a-mile down in a small cottage. Gibb visited her every day. He would go where she was painting up the hill behind the hotel and would critique what she was doing. It was a real opportunity to see every day’s work. Once a week, he would come to the hotel and she would put everything around in her room and he would then see the progression of what she had done.”

Eventually, though, Carr “thought she was becoming stale,” Bridge says. She felt she was on a roll, but had hit a plateau in France. So, she made plans to return home to B.C.

“According to her diary, she was astounded because Gibb said, ‘If you go on, you will be one of the women painters in the world.’ She was flabbergasted. She had no idea her teacher had that confidence in her. She didn’t like the ‘women’ part, but, apart from that, he knew that if she kept going she’d be somebody,” Bridge says.

When she returned to B.C. it took time for the local art scene to appreciate her newly honed style, but, today, it’s what she’s remembered for.

“What she came to France to do was to change what she was doing, change from that highly realistic, British watercolour tradition that she had been immersed in and was very successful [at] as a teacher, and in her art sales,” Bridge says. “She really wanted to change.”

Fresh Seeing runs through Jan. 19, 2020 when the show will travel to the Beaverbrook Art Gallery in Fredericton, New Brunswick. For more, visit audainartmuseum.com/exhibitions.