From bears to berries

A wildlife biologist turns her sights on climate science and the elusive huckleberry
Nov 23, 2016 5:00 PM By: Antonia Malchik 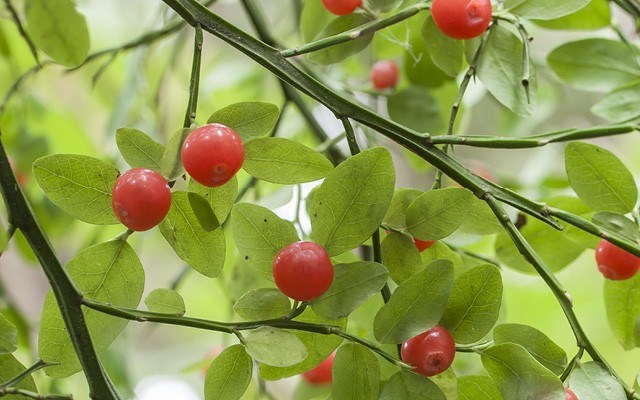 BERRY PROJECT Ripe huckleberries provide between15 and 50 per cent of a grizzly bear's diet. PHOTO by chad zuber, Shutterstock

The current debate over removing certain grizzly bear populations from endangered species protection often strays into arguments over hunting, but grizzlies might have less to fear from hunters than they do from the possible demise of an unobtrusive berry. Studies of grizzly and black bear scat show that huckleberries, at times, can make up to 15 to 50 per cent of their diet. Given that female grizzlies can't reproduce without sufficient body fat — about 20 per cent of their total weight — the barely knee-high huckleberry gains ecological significance far beyond its size.

Crouched amid deep green alpine shrubbery and grass, a beige U.S. Geological Survey (USGS) cap shading her face, Tabitha Graves leafs through berry bushes, painstakingly counting huckleberries 1,800 metres up in the mountains of Glacier National Park on a cold August day. Graves is a wildlife biologist with the U.S. Geological Survey in northwest Montana who has devoted most of her professional life to grizzlies. She thinks that understanding how climate change will affect huckleberries is crucial to understanding how it will affect the threatened bears themselves.

Graves places a grid, roughly 20 centimetres by 20 centimetres, and open in the middle like a picture frame, over a huckleberry bush and calls numbers off to her assistant: three ripe berries, five white, two green. "That's a lot of white berries," she comments before moving onto the next set of bushes. The whiteness is caused by a fungal infection called monilinia, but it's not the main reason she's here. In 2014, Graves launched a pilot project to compile a comprehensive record of this beguiling berry in order to figure out how changes in climate might affect its growth and production. She's seeking to answer essential questions: Where and under what conditions do huckleberries grow best? Her careful counting and documentation of the health of huckleberry patches is intended to help forest and park managers make the best management decisions they can in an uncertain future.

While much is known about huckleberries, she says, "very little of what's out there is in scientific journals or peer-reviewed studies." Most of it is in the heads of a wide variety of people: tribal elders, commercial and recreational huckleberry pickers, bear managers, professional silviculturalists and botanists. Early research was done without modern tools or much knowledge of the effects of climate change, and most modern research is buried in obscure U.S. Forest Service technical reports. The previous baseline for Graves's own work was set by Katherine Kendall, her predecessor at West Glacier's USGS office, in the 1980s. Kendall's work focused on berry productivity, and Graves is monitoring many of the same sites to understand how sunlight exposure, slope aspect, snowpack and other factors affect the plants' timing and growth.

With no birds singing, no insects humming, no tourist helicopters droning overhead, the silence makes the day seem colder. For company, Graves and her assistant have only the occasional appearance of a group of hikers tramping downhill from a night at Granite Park Chalet, asking how far it is to the bottom. Counting berries in the woods is quite a change from Graves's previous work analyzing samples of bears' hair, but both approaches help researchers understand how grizzlies survive and reproduce.

While grizzly bears are generally seen as highly adaptable, climate change still poses a threat. Shifts in temperature and snowfall are likely to impact food sources, from huckleberries and serviceberries to salmon and whitebark pine nuts. And these changes, along with temperature fluctuations that have altered the times bears enter and exit their dens, intensify the possibility of conflict with humans, grizzlies' greatest survival challenge.

Graves leads the way to another site farther up the trail, where she keeps track not just of berry production, but also the effect of seasonal climatic variations, pests and pollinators throughout the growing season. The lower study sites were covered in bushes full of plump ripe berries. Here, the berries have not yet ripened. Graves and her assistant step carefully through the short, sparse foliage, dotted with tiny yellow St. Johnswort flowers and the husks of Glacier lilies, to find her discreetly tagged study subjects. Their voices calling out counts and percentages penetrate the high-alpine silence.

The pilot project is scheduled to run for three more years, depending on funding, and even then the information will likely be incomplete. As Graves points out, her observation sites are located only in spots humans find easily accessible, which aren't necessarily the same as those preferred by grizzlies. She envisions a study that relies instead on tracking grizzly bears, following their natural ranges to get a fine-grained idea of food sources and uses.

For now, she turns and heads back down the trail, pausing to pick handfuls of berries — free, for the moment, to eat and simply delight in their tart flavour.

This article first appeared in High Country News in October 2016. For more, go to www.hcn.org