From Lot 1/9 to Olympic stage and beyond

Stakeholders pool ideas for multi-million-dollar project in village
Jun 15, 2007 3:06 AM By: Alison Taylor 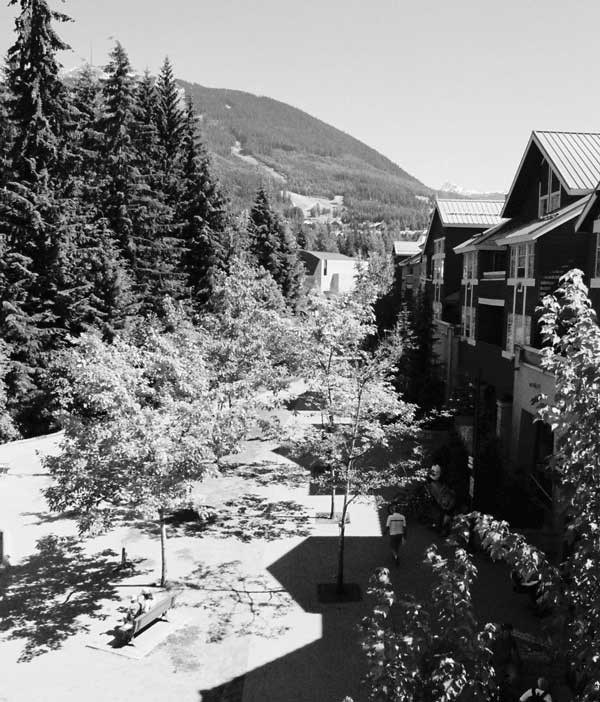 Lot 1/9 is on the verge of a major transformation.

It will morph from an undeveloped plot of forested land in the village to Whistler’s biggest celebration site during the 2010 Games, and after that it will again transform into something new — an outdoor skating rink perhaps, an Olympic plaza, a home for the local museum, or maybe all of the above.

There’s a lot of work to do to get to that point. Trees must be cleared, the site must be serviced with power and water, and perhaps most important of all, the designs for both the short-term and the long-term must be developed to complement each other.

“We don’t want to do anything duplicate… The goal there is to mesh our plan in site servicing, clearing, ground prep (with the Olympic overlay).”

The municipality recently gathered together designers, architects, landscape architects and engineers to brainstorm a vision for the land in a three-day workshop.

While the long-term vision has yet to be finalized, the vision for the short-term is becoming a little clearer as Olympic organizers plan to create the biggest outdoor celebration site in Whistler. It will be the main “live site” area in the resort during the Games, a place beamed into millions of homes around the world.

The site will accommodate 8,000 people, both sitting and standing, during the Games. It will include a significant covered stage with a big screen TV to provide linkages to Vancouver, a large scale audio system and appropriate lighting, room for security “mag and bag” checks, washrooms and concessions.

“All of the basics that you would expect to see in a normal Olympic type of celebration site but in this case one that has a capacity that is slightly smaller than you would get if you were in a downtown Vancouver area,” explained Marti Kulich, program director, ceremonies and production services for the Vancouver Organizing Committee for the 2010 Games.

The municipality has identified $14.2 million in possible funding sources. Some of that money is guaranteed from VANOC — $4.2 million. The remaining $10 million is expected to come from federal grants.

“With the $14.2 we want to deliver a finished plaza with landscaping, green space and whatever other features we can afford,” said Bennett. “The buildings, the cultural spaces, all the rest of that stuff, that comes next.”

Kulich explained how VANOC will utilize the site during 2010. The four-acre plot of land slopes down, away from the mountains. It narrows and comes to a point at the north end. That is the logical place for the stage, he said, and it provides an excellent view for TV audiences when the cameras move to the reverse angle cutaway, away from the stage and towards the audience.

“In this case you’d wind up looking up and over the audience and straight back up the stroll all the way into the town site of Whistler with the mountains beyond,” said Kulich. “So the reverse angle gives them a beautiful shot of the village and the entire community and it works extremely well in that particular sense.

“…We know that there is a strong television audience out there watching and it’s tailor made, therefore, for showcasing Whistler and trying to present it in the best possible light.”

Olympians and Paralympians will accept their medals there, and it will be the site of the Paralympic closing ceremonies — the last major event of the Games.

No matter what the future holds for Lot 1/9 after the Games, it will always be a place where history was made in 2010.

“It will always have this connection to a moment in time when it was a place of great imaginings and great events taking place and great moments captured in time,” said Kulich. “And we really hope that ultimately you’ll have this incredible, fond memory for all of Whistler associated with that plot of ground which will then go on to other uses but you will never be able to remove this incredible association with the rest of the world and with the greatest athletes in the world.”

The municipality must first have approval from the federal Environmental Assessment Agency before any work can begin on site.

Any long-term design for the land will be vetted by the community. The municipality is expecting to hold a community open house in August.