Letters continue to pile up in response to Garibaldi Way rezoning
Feb 21, 2018 2:29 AM By: Braden Dupuis 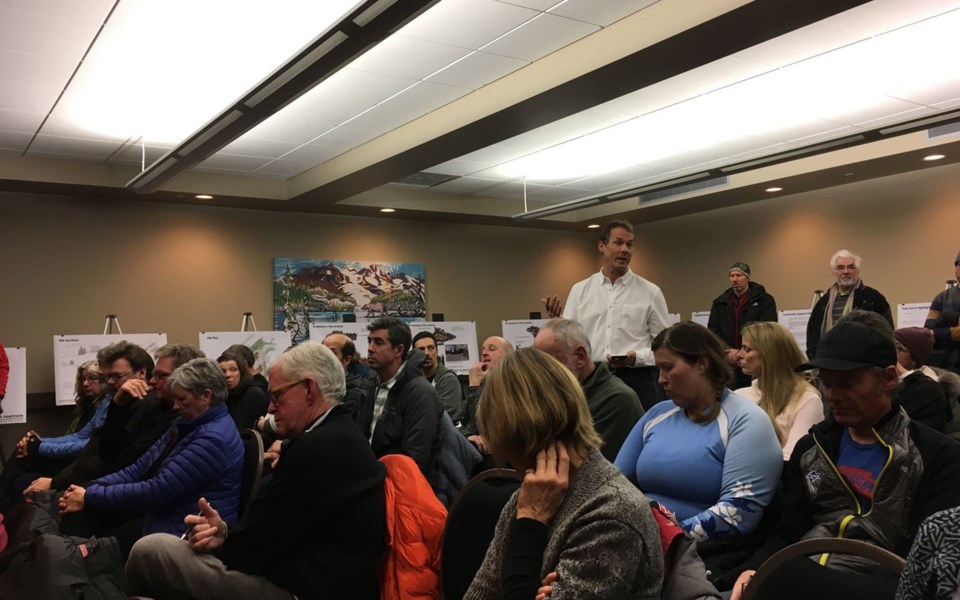 NERVOUS IN NORDIC Proponent Dave Brownlie, in white, responds to a question from the crowd at a Feb. 19 open house in regards to a rezoning application for a 74-unit employee-housing complex on Garibaldi Way in Nordic. Photo by Braden Dupuis

An information session on Monday, Feb. 19 regarding a contentious rezoning application in Whistler's Nordic neighbourhood was standing room only.

About 100 people showed up to the Whistler Conference Centre to learn more about the 74-unit employee-housing proposal on Garibaldi Way, and to ask questions of the proponents and municipal staff.

The evening began with presentations from municipal planner Mike Kirkegaard and Brent Murdoch of Murdoch and Company Architecture, who did the planning work for developer Robert Velenosi, before opening up to questions from the crowd.

While those in attendance listened patiently through the presentations, there was a clear air of frustration once the meeting opened to the floor.

Attendees started by asking about environmental oversight on the lot in question, work already done on the site and permits involved.

Kirkegaard was interrupted on more than one occasion by people not satisfied with his answers, and early on in the Q&A, Acting Mayor John Grills had to ask attendees not to speak over one another.

Anne Townley asked why a Request For Proposals has not been issued so council and staff can evaluate the various private housing projects now in the works and pick the best of the bunch, rather than looking at them one at a time.

Kirkegaard acknowledged that there are now two rezoning applications being processed at municipal hall (the second being a 65-unit building in White Gold headed by Innovation Building Group/Vidorra Developments), as well as interest from several other property owners.

"We are looking at these individually and then comparatively," he said.

"So we are evaluating each of these proposals relative to the OCP policies and the guidelines, and then we are providing comment back to applicants, giving them an opportunity to address comments, and then comparing the merits of the applications."

Some attendees were unimpressed that questions posed at the last council meeting (where staff said answers would be provided at the information meeting) were still without straight answers.

"We're here in a situation where there's a valid question asked to council, almost two weeks ago, (and) I'm hearing from a couple of people here that maybe you didn't answer the question, and it's fair for staff to not know everything, but these are quite important, specific things," one attendee pointed out.

"Why are we rushing this, immediately, right now, while there hasn't been time to respond to valid questions that have been made to council?"

Kirkegaard said he didn't think the project was being rushed, but that the RMOW is trying to bring housing projects forward as quickly as possible.

"There is still a lot of review and study and analysis to be done," he said.

"We definitely received a lot of correspondence with a lot of questions, and we are going to be reviewing all of those comments... There (are) a lot of detailed questions that take time to answer, and so we will endeavour to do that."

In response to concerns about a precedent being set in terms of affordability and rent increases, proponent Dave Brownlie said there would "absolutely" be restricted increases.

"We just want to have something that is reasonable that's going to work with the municipality, something that will ultimately protect us as interest rates go up, costs go up, etc.," Brownlie said, adding that the initial rates would be set two years from now and would not go up for five years.

"And then ultimately (we would be) looking at some sort of inflationary index, and that's something we're absolutely open to, but we do need to see some kind of cost increase."

The biggest concern for nearby residents is the massive change in density — from six bed units to 222 — in a neighbourhood they say is not suited for it, and the related impacts to the quiet cul-de-sac.

"We have heard very clearly that density is a concern of the adjacent neighbours, and that will be definitely looked at in greater detail through further review of this project," Kirkegaard said.

The biggest reaction of the night came after the final comment from the crowd, when Townley noted that those who have been on the Whistler Housing Authority waitlist for up to five years should not be passed over.

"A business comes in, is able to lease one of these units, and they may be putting in somebody that's been in this community for one month, that secures housing. To me, it's not fair. It needs to go off the (Whistler Housing Authority) waitlist if they're getting bed units from this community," Townley said, to near-uniform applause from the audience.

A group of concerned residents has organized en masse against the project, including an extensive letter-writing campaign and a new website: www.2077garibaldiway.ca.

The project's status can be tracked by going to www.whistler.ca/activeapplications and searching 2077 Garibaldi Way.

Businesses, meanwhile, continue to formalize their support for the project, with five more letters in favour included in the Feb. 20 council package.

But the opposition letters continue to outnumber those in support, with 28 more included in the most recent council package.

The rezoning will eventually be brought to council for first and second readings, after which a formal public hearing would be held.