Pique leads drive for donations to the CFOW with promise of matching funds
Dec 14, 2011 8:00 PM By: Andrew Mitchell 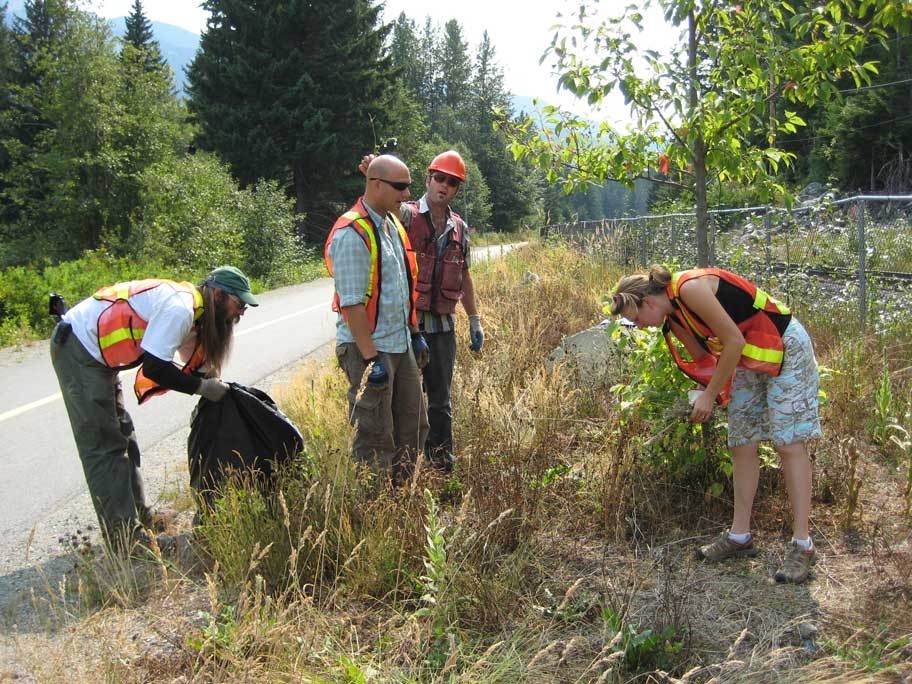 There are 65 plants on the Sea to Sky Invasive Species Council's hit list, including two species that are capable of causing a lot of damage if left unchecked.

Giant Hogweed, or specifically Heracleum mantegazzianum, is a phototoxic species that has been found in the Squamish area and poses a genuine health risk. Contact with the sap of a plant can cause a skin inflammation, and with exposure to sunlight the victim's skin burns and blisters. It's painful, can cause permanent scarring and, in some cases, if it comes in contact with a victim's eyes, it can cause blindness.

In Europe, tens of thousands of people are treated every year for hogweed burns.

The other "Most Wanted" species is Japanese Knotweed, Fallopia japonica, an incredibly disruptive plant that can cause huge amounts of damage. It can crack foundations, split roads, choke rivers and streams causing flooding, and it's incredibly hard to destroy — a plant's roots can dig down more than five metres with a radius of 20 metres, Even a small sliver of root left behind is enough to propagate a new plant.

Knotweed is such a menace in places like the U.K. that homebuyers can be declined for a mortgage if there are any plants on or near the property.

The Sea to Sky Invasive Species Council (SSISC) is leading the battle against these invasive species in the corridor, and they're doing it with the assistance of a grant from the Community Foundation of Whistler and the Environmental Legacy Fund (ELF).

"Hogweed is a human health issue, and knotweed is kind of like an 'everything else' issue," said SSISC coordinator Kristina Swerhun. "(Knotweed) is one of the worst plants in the whole world, and we're unlucky enough to have it here."

In 2011, the SSISC received $15,000 from ELF, which will be spent on programming in 2012. Of the total, $5,000 will go towards SSISC's ongoing work to train landscapers, horticulturists, park staff and others how to recognize invasive species and what to do if they're discovered. The remaining $10,000 will go towards a Special Weed Action Team (SWAT) that will physically remove invasive plants from public lands and dispose of them safely. In some cases that means drastic measures like digging out the entire root mass and burning the plant, while in others they have to obtain special permission from local governments to use herbicide.

"We really need to invest now because the problem just doubles every five years," said Swerhun.

As well as educating people in the horticulture business, and obtaining permission from the District of Squamish to use their facilities to safely dispose of invasive species, the SSISC is also working to educate the general public. They published a brochure last year and maintain a database with photos online at www.ssisc.info.

"My goal here is to eventually put myself out of a job," said Swerhun. "We want to educate and empower land operators and managers to do this work, and we'd like to see invasive species become a budget line item for each municipality and regional district, and every level of government, so every year we can stay on top of it."

The Environmental Legacy Fund is the CFOW's largest fund with over $2.5 million, built up over the years with a share of fees collected at the landfill before it was closed. The interest earned on that fund has been spent on numerous environmental projects in the Whistler area, and because the principal is never touched it will continue to provide funds through the future as well.

Through the SHARE Whistler program, Pique Newsmagazine is encouraging Whistler's young population to contribute to the CFOW by matching donations up to $10,000. Those who donate $50 or more to the fund or CFOW initiative of their choice will have the chance to win a pair of Prior skis or a Prior snowboard for each week of the six-week the program has been active, and a $10 donation gets the donor a chance to win daily draw prizes. Details are at www.whistlerfoundation.com.

Go to www.whistlerfoundation.com or www.piquenewsmagazine.com and click on the SHARE Whistler logo. The CFOW will forward donations (net of 3.9 per cent CanadaHelps processing fee) directly to the donors' charity of choice no later than Jan. 31, 2012.

Select a charity such as Whistler Search and Rescue Society or the Whistler Children's Centre Society, or donate directly to one of the CFOW's permanent endowment funds such as the Environmental Legacy Fund.

The deadline for the weekly Prior draws is 7 a.m. each Wednesday. The winner this week: Jim Kennedy.