Experts warn that glut of natural gas should not stop search for renewables
Mar 27, 2013 9:00 PM By: Allen Best 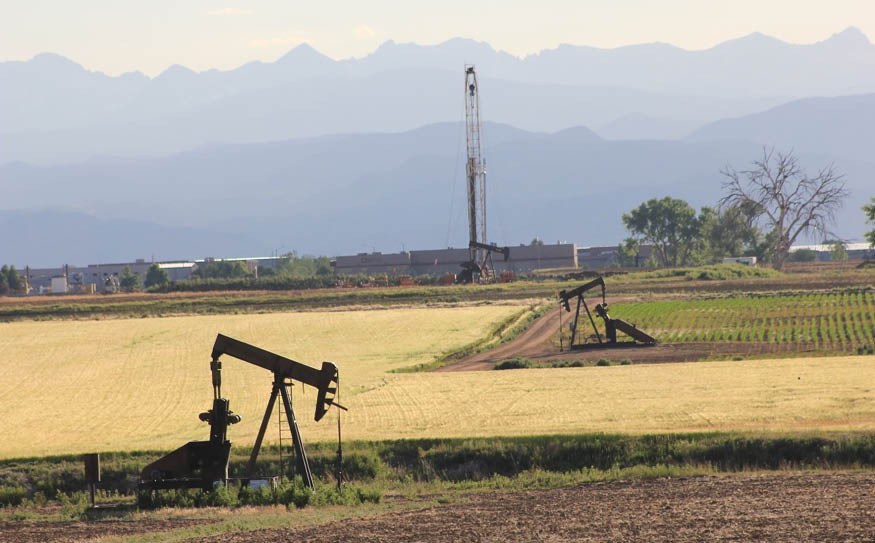 energetic debate Technological advances are making it easier than ever to extract fossil fuels that were previously difficult to pull out of the ground. Photo BY allen best

For several decades, the United States was haunted by what energy analyst Randy Udall calls the "specter of depletion." Despite robust drilling, domestic supplies of oil and natural gas continued to decline.

Books such as "The End of Oil" and "High Noon for Natural Gas" proclaimed the imminent end of easy access to hydrocarbons that had fuelled growth of the U.S. and, really, the world economy.

That narrative has been forced to take a seat in the back row. Those books might still be right, in the longer run, but for now, it's rock 'n' roll time as new technology pries hydrocarbons from tightly congealed formations deep underground. Talk abounds in the United States of "energy independence," a rhetorical shake of the fist at Venezuela, Saudi Arabia and oil-exporting countries. (Canada seems to be excluded from this angry "take that, pal"). There's even talk about exporting natural gas.

Udall, who has both a brother and a cousin in the U.S. Senate, has been studying energy since the 1980s, when he first started worrying about global climate change. Later, he directed efforts to ramp up energy efficiency and renewables in Aspen. About a decade ago, he co-founded a group called Association for the Study of Peak Oil-USA.

Repercussions of this boom are giant. For the average American, this bounty of gas means savings of $300 to $400 a year, said Udall.

U.S. per-capita emissions of greenhouse gases have stabilized, even dropped, as electrical plants that burn coal are being replaced by plants that burn natural gas, which has become cheaper and produces only half the carbon dioxide emissions. Coal has dropped from 52 per cent of electrical production eight years ago to just 43 per cent now. Some analysts expect a further drop to 35 per cent yet this decade.

What happened? In a recent talk in Golden, Colo., Udall pointed to technology, daring and persistence by drillers in both Colorado and Wyoming, as well as in Texas. "It's wizardry. It's beyond technology what these guys are doing," he said of efforts to extract natural gas and oil from stingy shale formations.

Hydrofracturing, if much reviled, is one of the key advances. Used since the 1940s, the technique has been improved and is crucial to extracting the natural gas that is encased in tightly bound particles of sand. But there are other techniques, too. Udall observed that computers might be employed more extensively in drilling than any other industry.

Panels of speakers at the Vail Global Energy Forum held in early March agreed that this bounty of natural gas gives the United States — and really, the world — breathing room while we figure out more sustainable energy sources that pose less risk of causing costly and disruptive climate change. The flip side of that coin is figuring out greater efficiency of existing energy, which also has many challenges.

For now, most of the talk is about whether fracking poses danger to humans and ecosystem health. The controversy has mostly surrounded use of small amounts of chemicals added to large volumes of water and sand to expedite flow of gas from tightly spaced rock formations.

Jim Brown, who is president, Western Hemisphere for Halliburton, the giant soil-services supplier, says no case of fracking solutions entering potable water sources has yet been confirmed in the United States. Natural gas-bearing formations are deep underground, separated from near-surface water aquifers by layers of dense rock. More than one million "fracks" have been done in North America, 400,000 alone since the turn of the century. He said the concern should be focused not on fracking, bur rather on integrity of well-bore casings, the concrete sleeves that prevent fluids and gas from escaping.

Another speaker, Mark Zoback, a professor of geophysics at Stanford University who studies extraction of gas and oil from the unconventional rocks, agreed that concerns about fracking have been misguided and called out the involvement of Yoko Ono.

"I'm still mad at Yoko for breaking up the Beatles," he said.

Zoback, however, stressed the need for oversight and healthy skepticism about the integrity of the drilling process. He pointed to BP's Deepwater Horizon disaster in the Gulf of Mexico.

A greater problem yet for natural gas may be fugitive emissions. Methane, the primary constituent, has 20 to 100 times the heat-trapping properties of the more common carbon dioxide. If allowed to escape into the atmosphere during extraction or handling, the damage to the atmosphere might well negate its value in displacing coal.

For that reason, any broad use of natural gas in transportation should be done very carefully, said Sally Benson, a professor of energy resources engineering at Stanford University and director of the university's Global Climate and Energy Project.

If people in places like Africa are to achieve greater well-being as enjoyed by people in advanced countries, she said, the world may need six times more energy than it now consumes.

While an expert on coal, she points to sunshine as the most abundant and promising fuel. While efficiency and storage are being improved, natural gas is a perfect partner for solar and other renewables. "I think we need to deflect the idea they're in competition," she said.

But she also emphasized that while the glut of natural gas provides breathing room, it cannot be used as an excuse for becoming less diligent about improving renewables.

"That would be a terrible, terrible mistake," she said.

For now, we're in a drilling frenzy. In his talk, Udall described drilling as the dominant land use in the United States, with one-sixth of the nation now leased for mineral extraction. And while the gas and oil is now flowing, he pointed out the enormous effort to get it. The amount of gas that Kuwait can extract using 35 wells in conventional resources, it takes 800 wells in the unconventional sands of Texas.

In other words, as we shift our electrical production to natural gas, and some of our transportation, too, we depend ever more on drilling that can be sustained, at least in the short term, but only by frantic drilling.

Allen Best writes about water and energy when he's not focused on mountain towns. He can be found at http://mountaintownnews.net.