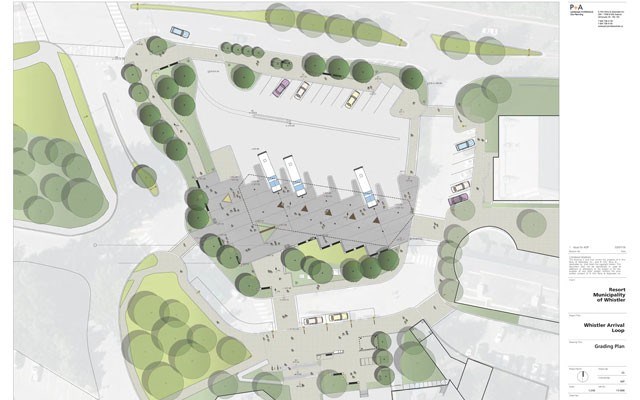 You only get one chance at a good first impression, and with its re-envisioning of the Gateway Loop, the Resort Municipality of Whistler (RMOW) is hoping to provide a memorable arrival for first-time guests and recurring visitors alike.

"For a number of our guests, that is their introduction to Whistler, and if they get off a bus and stand in the rain, and then look around and can't even see the entrance to the Village because of all the trees and growth and so on, it's not the best of experiences," said Whistler Mayor Nancy Wilhelm-Morden.

All those issues and more will be corrected with the RMOW's Gateway Loop Project. Construction is set to get underway this June and last until September.

"It's going to improve the egress in and out of the loop. Right now it's kind of a mishmash of taxis, shuttles, buses and private vehicles, so that will be more organized," Wilhelm-Morden said.

"We haven't chosen them yet, but there will be shelters which will keep the weather off the guests, and then improvement of sightlines so that when people look around they can actually see the entrance to the village."

A consultant team is working towards the final design, and a construction contract will be awarded shortly.

Construction will last through the summer, and residents and visitors should expect disruptions throughout.

An open house is scheduled for May 4 from 2 to 4 p.m. at the Whistler Public Library for residents to learn more about the project and the logistics during construction.

The project is the result of years of planning and consultation. At an open house in February 2015, the RMOW presented three options for the Gateway Loop. Council endorsed Option B — the medium intervention option — in April 2015.

"It was less expensive than the major intervention and it's still achieved the same goals, so it seemed like the most reasonable way to go," Wilhelm-Morden said.

The Gateway Loop marks the point of arrival for 39 per cent of Whistler's summertime guests and 49 per cent of its winter guests. On any given day, there is an average of 5,000 people on-site.

Stakeholders like shuttle companies and taxi drivers expressed concerns with the functionality of the current site during consultation.

"The shuttles told us about how they get in and out of the loop and the difficulties that they experience from time to time," the mayor said, adding that bus drivers had similar concerns.

"And then of course the taxis, they find private vehicles parking where they shouldn't be parked and so on, so this hopefully will make some order out of what is sometimes chaos at the Gateway Loop.

"I think we've done a good job at choosing the model that will work the best. A lot of thought has gone into this project, so hopefully we've got the right one."

Head to www.whistler.ca/business/current-projects/gateway-loop-enhancement-options-project for updates.