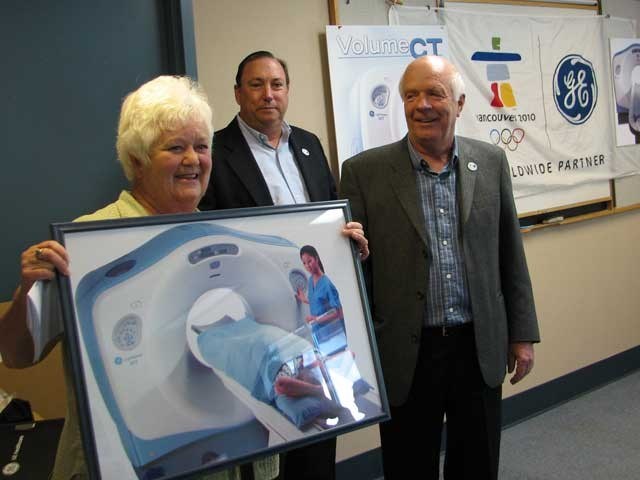 A $1 million Olympic legacy landed in Whistler this week with the announcement that GE was donating a new 64-slice computed tomography (CT) scanner to the Sea to Sky region.

GE, a worldwide Olympic partner, is donating a state of the art medical imaging device, which will be located in the Whistler Health Care Centre and should be operational by the end of the year. The Lightspeed VCT, worth approximately $1 million, will remain in Whistler following the Games.

“The project we’ve been working for and lobbying for for many years has finally come to fruition,” said Marnie Simon, chair of the Whistler Healthcare Foundation.

The Sea to Sky Regional Hospital District (SSRHD) has been working toward obtaining a CT scanner to be based in Whistler for some time. A fundraising campaign in 2006-07 by the Whistler Health Care Foundation, Pemberton Health Care Foundation and Squamish Hospital Foundation generated $1.1 million toward the $2.3 million capital cost of the project. The remaining $1.21 million was to be covered by the SSRHD.

The SSRHD increased its funding earlier this year, from an initial $500,000, when costs for the 900 square foot addition needed to house a CT scanner increased nearly $800,000.

However, the $2.3 million project included a refurbished CT scanner, rather than the state of the art model that GE is now donating.

The savings, according to Simon, will go back to taxpayers, in that the SSRHD’s contribution will be reduced.

Vancouver Coastal Health, the health authority that oversees the Whistler Health Care Centre, will provide the operating funds for the CT scanner.

Computed tomography (CT) is a medical imaging method capable of generating three-dimensional images, inside the body, non-invasively. The advanced imaging equipment, notably MRI and ultrasound, will be used to help doctors diagnose and treat athletes during the 2010 Olympics.

“We are delighted that Whistler… now has this essential equipment for residents and visitors,” Peter Foss, president, Olympic Sponsorship GE, said in a release. “Residents will no longer have to travel long distances for CT scans. It’s gratifying to know that one of GE’s innovative healthcare products will deliver substantial benefit with the Sea to Sky region.”

GE has provided infrastructure for venues at past Olympic Games, including power, lighting, water treatment, transportation and security devices.

Construction of the addition at the Whistler Health Care Centre that will house the CT scanner is expected to start in the next couple of weeks. The aim is to have the scanner operating by Christmas.