Getting in the Olympic spirit? 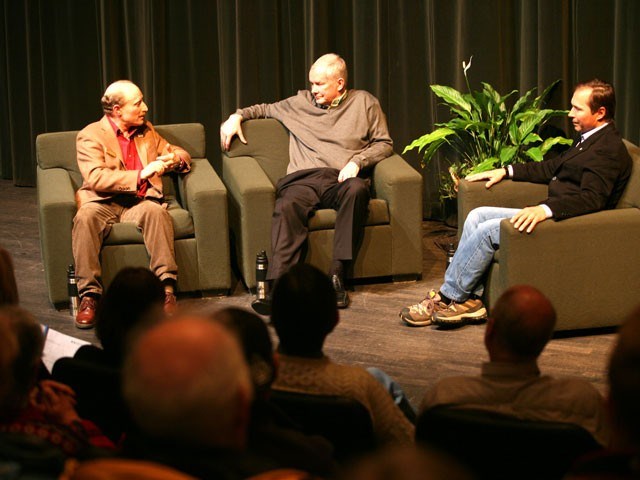 -With Files from Alison Taylor -

Whether locals have enough “Olympic spirit” is another debate.

Jennifer Erickson, a 35-year Whistler resident, punctuated Saturday’s meeting when she told council she did not think there was enough enthusiasm around town for the Games.

“This is not so much a question as a plea to the council for some kind of outreach to make this our Olympics,” said Erickson.

“There is a level of un-involvement in the community that I think is scary,” she said.

Her appeal to council was the final question of the night and was met with strong applause from the audience.

In the heated discussion that followed, most of the councillors stated they do not think Whistler Olympic spirit was missing.

“The town of Torino did not wake up to the Olympics until the second day of the Games,” said Mayor Ken Melamed.

“It is going to be so intense you won’t be able to stand it. I am so not worried,” he said.

Councillor Ralph Forsyth added: “I cannot imagine not being super excited about the Games."

But Councillor Bob Lorriman agreed with Erickson, saying he has noticed the community seems to be detached.

Lorriman was told back in the bid phase that there are several cycles a town goes through from when the Games are first announced to when they occur.

“Maybe we are just going through some of those swings,” said Lorriman.

“I think it is a great thing as a community to keep on our minds,” he added.

The intense four-hour meeting at MY Millennium Place saw people packed into the theatre seats, spilling out into the stairways and standing in the nosebleeds.

Topics covered ranged from transportation, to venue operations, to how much the Olympics will cost Whistler.

And the public’s attention span never faltered, with a constant stream of questions directed at VANOC, the mayor, and councillors. Some questions were asked out of general interest, others were laced with concern and emotion.

Outside the theatre, more people mingled as they discussed their opinions on topics covered at the meeting.

MY Millennium Place was also properly dressed up Whistler’s first-ever town hall meeting on the Olympics, with a model of the Athlete’s Village at the entrance, posters, and information booklets scattered throughout the facility.

The meeting started off with a presentation by Mary Conibear from VANOC on planning for the Games, followed by both Conibear and Maureen Douglas, director of communications for VANOC, answering questions from the public.

Several of the questions were diverted because they were not directly related to “planning”.

The finale of the open house was an intense, hour-long question and answer period with the public.

According to Melamed, the meeting is part of the municipality’s ongoing commitment to share information on the public about the Games.

“Please don’t hold back,” said Melamed, encouraging people to contact the municipality with any questions they have.

“The more information today, the more opportunity to work through the challenges,” he said.

He added that while Whistler is good at doing events, this is the ‘quintessential event’, and the municipality needs the support of everyone in the community.

Not everyone was satisfied with the answers they got at the meeting.

She was quickly shut down when she began asking whether the volunteer age would be lowered to accommodate high school students, which is what parents have been led to believe through the ongoing negotiations with VANOC.

“It was a tightly managed forum that really didn’t allow us the latitude to ask the questions we wanted to ask,” said Jewett of the meeting.

“It didn’t live up to my expectations.”

Council and VANOC representatives were willing to answer several questions about accommodation and transportation and planning processes but Jewett felt she got a terse response to her questions, saying that the meeting had a very narrow focus.

The official word response about the volunteer age was that VANOC has yet to come to final agreements with the school board. Fifteen-year-old students, however, may not be able to participate in the official volunteer program.

“The door isn’t closed by any means,” said Douglas.

Jewett also agreed with Erickson’s comment that there is a lack of spirit in the community about the 2010 Games.

“There’s an attitude of expectation,” she said. “We have to figure out why that is and turn it around before the Games.”

One clear message during the meeting that left no body second-guessing was that the Olympics will be huge.

During her presentation, Conibear compared a World Cup event to the Olympics.

As Conibear put it, the Olympics are about 10 times the size of a World Cup.

The spectator stands are near empty at World Cup events, where they are at capacity at the Olympics – and there are 15,000 seats alone for the alpine ski races at Creekside.

About 300 athletes attend a World Cup event, 1,300 attend the Olympics; And approximately 900 people volunteer for the World Cup, versus 5,000 for the Olympics.

Conibear said another way to comprehend the enormity is that 120,000 people usually attend all the Giants and Canucks Games in Vancouver during the month of February.

Comparatively, for the two weeks of February that the Winter Olympics take place, an estimated 650,000 people will attend.

“It is many magnitudes above the World Cup. It is quite a difference,” she said.