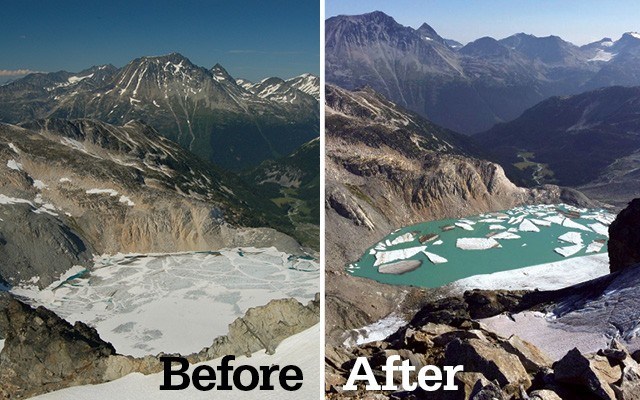 before and after The Decker Glacier, shown in July of 2006 and again in August 2014. photo by jason krupa

When Vancouver lawyer Jason Krupa was hiking the Whistler backcountry for the first time in July of 2006, he was amazed at what he saw.

"It was like being out of the movie Alive," Krupa said.

When he returned this August, the scenery was markedly different.

"I looked down and I saw what used to be Decker Glacier, and now is Decker Lake," Krupa said.

What was a solid block of ice in 2006 was now mostly water.

"I'm not a glaciologist, but it certainly looks like that has gone significantly this year or last," Krupa said.

Krupa may not be a glaciologist, but Dr. Johannes Koch is.

Koch did his PhD on the histories of glaciers in Garibaldi Park over the past 10,000 years.

"It appears that the tongue of Decker Glacier has been calving into a lake, even in 2006, as you can see water at the far end of all the ice floes," Koch said in an email.

"By 2014 it seems that many of the ice floes have melted away, thus exposing much more of the lake surface."

Comparing the two photos is somewhat difficult, Koch said, as the first was taken earlier in the season.

Koch said he has seen similar disappearance of glaciers in Garibaldi Park and at Pemberton Icefield, as well as elsewhere in the world, but "it is still concerning and an eye-opener every time in many ways."

The picture taken by Krupa in 2014 is just more proof that Whistler's glaciers will eventually disappear completely.

"As this is not unique, and all glaciers in the southern Coast Mountains as well as elsewhere, are retreating, this has greater consequences for water resources, such as water flow for hydro dams, irrigation, salmon runs," Koch said.

At its current rate of melting, the Decker Glacier will quite likely be gone in our lifetimes, Koch said, but the long-term effects of losing this specific glacier amount to little more than a change of scenery.

The loss of all glaciers in the area, however, would have a greater long-term impact on salmon runs, cliff stability and water use.

To Whistler Blackcomb (WB), retreating glaciers are nothing new.

"We've been following this for decades. The UN environmental program puts out data on glaciers throughout the world, and in most cases glaciers are receding globally. There are some anomalies, but not many," said Arthur DeJong, environmental resource manager and mountain planner, with WB.

The reality of climate change is not news to WB, and as such, they've spent a lot of time preparing for business in a warmer world.

"We live on these land forms, so we've been planning to manage climate change for decades," DeJong said.

By doing things like placing ski lifts higher and grooming ski trails in the summer, WB can mitigate the concerns of less snowfall in the winter.

Enhancing the resort's focus on year-round recreation is key as well.

But while WB can do everything in its power to make sure it's prepared to deal with climate change, in the long run the problem may be out of its hands.

"Although we can... manage climate change with considerable resilience, the global economy does not have that resilience," DeJong said.

"And we will go as the global economy goes."