'Nobody seems to have thought about looking in the macro channel, where there's a lot more space'
May 2, 2017 4:00 AM By: Lynn Martel 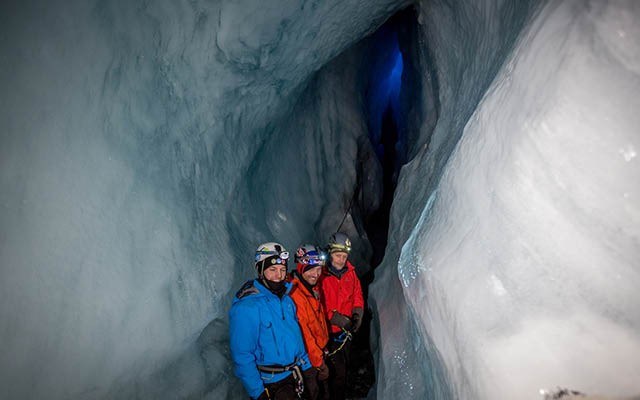 It all began as simple curiosity.

After decades of travelling around the world climbing frozen waterfalls plastered to steep cliff faces and exploring deep inside caves, Will Gadd decided to combine the two passions right in his own backyard.

Quite by accident, however, what started out as just a fun adventure turned into an exciting new discovery for science.

Earlier this winter Gadd led a team of adventurers and scientists to explore a giant ice cave deep inside the Athabasca Glacier. The idea was sparked by his friend, Raf Andronowski, who scouted out an appropriate millwell — a giant hole bored into the ice by running water — which he then marked with his GPS. Unfortunately, Andronowski was injured in an ice climbing accident so he missed out on the winter adventure.

Enduring -37 C temperatures on the glacier's surface, they tracked the GPS coordinates to the millwell's location without much difficulty, but there the work began, as windblown snow had plugged the entrance.

"It took a massive amount of digging and tunnelling, it was not easy to find," Gadd said.

Eventually they removed enough snow to uncover the entrance, then built a solid anchor from which Gadd and several others lowered themselves. And as they dropped deeper inside the cavern they encountered warm air rising, much like when caving underground.

"Outside was cold, barren like a desert, and inside the glacier it was zero," Gadd said. "The walls were curved in shapes pretty similar to sandstone desert canyons, all carved by water. We went from this incredibly harsh world on the surface to this amazing place down there."

They descended 120 vertical metres, and walked even further from the entrance following horizontal passages.

"We were really deep down there," Gadd described. "It was amazing blue light for about the first 30 metres, then it got dark. You couldn't see a thing, just like caving inside a mountain. Having a headlamp is essential, this was real exploration. There's no map, no idea what's down there. And it's always changing. We're exploring something unique and amazing. And it's not going to be there in time."

The ephemeral qualities of ice have always attracted him, Gadd said, but what he never counted on was finding two distinct colonies of biofilms living deep below the surface, one red algae and one green. A biofilm is a group of microorganisms that stick to each other and together adhere to a surface. Neither did he expect to see insects flying around. And, equally fascinating were the pools of liquid water they discovered deep under the ice in the dead of winter.

For team member Martin Sharp, a University of Alberta glaciologist who for years has studied how water moves along and under glaciers through drainage systems, mainly in Canada's arctic and particularly as glacial melting accelerates due to Earth's warming climate, the discovery of the biofilms was a bonus.

"They were colonizing things like cracks in the ice where there was water seeping out of the crack," Sharp said. "Also, where there was a water pocket that was partially open on the tunnel wall, there would be films on the surface, in the water."

The biofilms were discovered about 50 metres below the surface, a depth where some light does penetrate, Sharp said. As such, he suggested the biofilms could be converting light energy into chemical energy through the process of photosynthesis.

"Even though we were 50 metres down, there was still a reasonable amount of light, so our suspicion is they may be photosynthetic, because even with the snow cover on the surface, which was a reasonable snow cover, there was still plenty of light getting down there," Sharp said. "They're probably extracting nutrients out of the water where that's available, and probably photosynthesizing as well."

What was especially exciting is that no one has ever found living organisms so deep inside a glacier, Sharp said.

"People have looked for microbes inside ice in the past, and some have been found in ice cores, but everyone has always looked in the micro channel, between the individual crystals where there's only very small amounts of water present," Sharp explained. "Nobody seems to have thought about looking at the macro channel, where there's a lot more space, a lot more air, and probably a lot more light. The fact that we found these things, in this environment, that's new. Nobody had really thought about that."

Following their adventure, which included participants from Canada Science and Technology Museums and a Discovery Canada film crew, Sharp investigated to see if there was any existing information about the organisms they'd discovered. He couldn't find a single record.

"When you think about it it's not terribly surprising, microbes have a propensity of finding ways of living pretty much anywhere," Sharp said. "But as far as we know, this is the first time anybody's seen this."

On a return visit to the ice cave a few weeks later, one of Sharp's students, with permission from Parks Canada, retrieved some samples of the biofilms. The samples have been sent to a colleague in the U.K. who will attempt to identify the organisms. Once some preliminary information is understood, the scientists can develop experiments to answer specific questions.

"What would be interesting, really, to know is whether they're a kind of all-winter feature that can survive the whole winter in there, or whether it's just a sort of transition between when things go dry at the end of the melt season and before it gets too cold," Sharp said.

"I guess if there's enough snow on the surface it's probably pretty insulated if you've heat coming up from the bottom, you've got these vertical passages at the bottom that warmer air can rise up those passages and maybe prevent it from getting too cold in them. There's lots to learn, great potential."

In addition to taking plenty of photos — Canmore based adventure photographer John Price was a team member — the crew recorded video and sounds from inside the glacier, some of which were somewhat unsettling.

"We got down to where the ice pressure was making impressive cracks in the walls," Gadd said. "It was all the dangers of ice climbing and caving in a dangerous environment."

Having lived much of his life in the Rockies, Gadd said he is continually amazed by the rapid rate of melt the Athabasca is experiencing — currently five metres annually — due to climate change. But now his perspective has expanded.

"Whenever I'm travelling on glaciers to climb or ski, I've always looked down into millwells and wondered what's going on down there," Gadd said.

"Now when I drive by the Athabasca Glacier I don't see just this chunk of ice. There's this whole world going on down there."