Goggles get Computerized at Recon Instruments 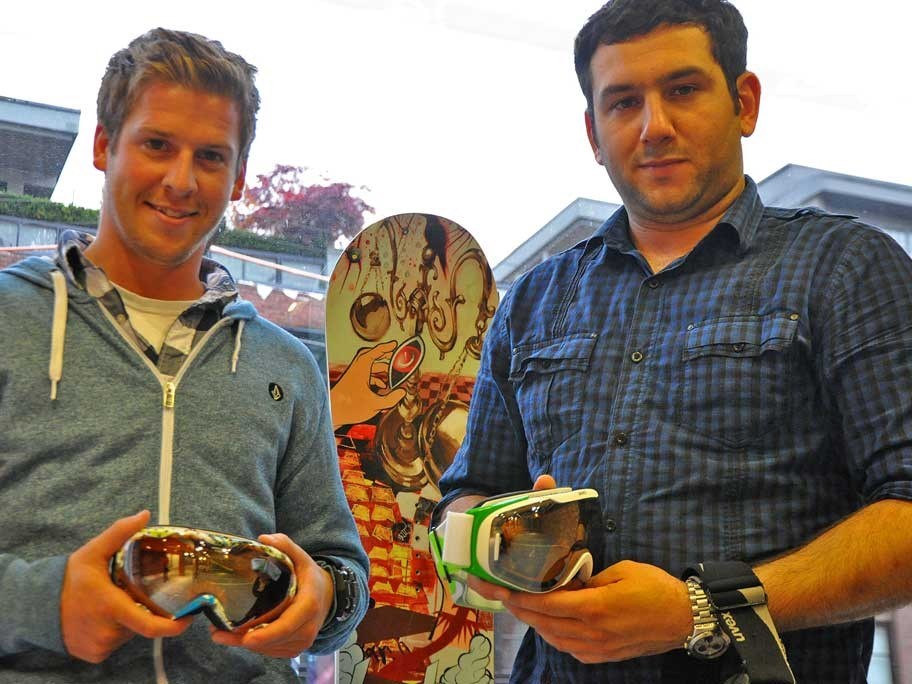 For downhill skiers and snowboarders, goggles are windshields. Without them, tears quickly form, obscuring visibility—hardly a wise choice at any speed. Small wonder that 90 per cent of snow sliders wear them. Lately, as goggle prices have fallen, fashion has grown to match function among wearers who may burn through several pairs of brightly-coloured frames with reflective, rainbow-hued lenses in a single season.

But using lenses as projection screens? That happened when a quartet of entrepreneurial UBC grad students hatched an idea: mount a microcomputer inside the goggles' frame that would display vital information on the lens — such as speed, location, elevation, air temperature, and distance travelled — while in full flight. "Almost immediately we knew this was a real product, not a project," said Darcy Hughes, chief marketing officer with Recon Instruments, the company he founded with fellow students Fraser Hall (chairman), Dan Eisenhardt (CEO), and Hamid Abdollahi (CTO). Their common bond was that all were ski and snowboard devotees.

When Pique met Hughes at Recon Instruments' Yaletown offices in Vancouver, he quickly made the point that the company was not in the business of making goggles. "We create micro-optics and GPS-encoded displays installed in compatible goggles." During last April's World Ski and Snowboard Festival in Whistler, Pique tested the system, with impressive results. The goggles were an instant hit with athletes, and Hughes said the likes of Canadian Olympic snowboard gold medallist Jasey-Jay Anderson can't stop playing with them.

"We had one of the most successful goggle launches in history. Our first brand partner, Zeal, sold 10,000 units in 10 weeks."

Recon's "overnight" success story was four years in the making. "Our first prototype was huge," Hughes said with a laugh. "It looked like a tumour on the outside lens. Where to put the display took years to figure out. Most people are stronger with their right eye, so it ended up on the lower right side." Indeed, that's where a row of mini screens shows real-time data.

According to Abdollahi, the system was designed from scratch.

"Our major challenge was the form factor. We had to shrink, shrink, shrink the technology over and over. There was the added challenge of a harsh environment too. Then there was the optics. We had to design a computer that interacts with humans, a field that has a ton of intricacies: the colour of the virtual image, the screen-refresh rates, the viewing angle, to name a few."

At $300 to $400, who buys these devices? "Our target market is threefold," Hughes said. "First, young snowboarders, because they talk so much. They live online. With Recon's plug-in for Android-based phones, we're synonymous with connectivity. Secondly, the middle-aged crowd who ski 20 to 30 days a season.

The majority — 50 per cent — are used by the backcountry-gear bunch that ski 100 days a year, test our product, and sing its praises."

A palpable feeling of quietly contained excitement pervades Recon's newly expanded premises, where 45 employees are spread across two floors. "The beauty of starting up a company in Vancouver is help from various levels of government, such as the federal Scientific Research and Experimental Development tax [-incentive] program," Hughes observed, "plus the talent pool from local schools. People want to stay here, but there are hardly any head offices, so we get graduates before they're hired away to Silicon Valley."

Given the copycat nature of global manufacturing, what are Recon's chances of maintaining its edge?

"As we have patents, a committed team with a passion for sport, and brand partnership, we won't have competitors for a few years. We're going to make our investors very happy," Hughes asserted. For a company that started in a broom closet at UBC, the sky seems limitless.