Some residents already evacuated with others on alert
Jun 5, 2009 8:22 AM By: Clare Ogilvie 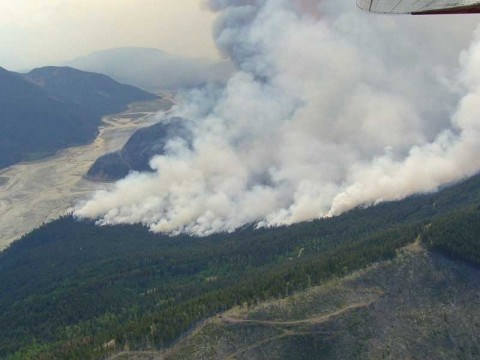 Every time the phone rings Casie Menhinick is prepared to hear the worst - her home and family business for the last three decades has burnt to the ground.

Her property, Spruce Lake Wilderness Adventures, is near a raging 600-hectare fire at Tyaughton Lake, 65 kilometres west of Lillooet.

"The fire came right onto our ranch," said Menhinick, who was ordered along with her five children aged 5 to 14, to evacuate from her home Sunday.

Her husband Warren, who grew up in the area, refused to leave the ranch and remains behind hosing down the property to try and keep it safe. Menhinick only hears from him sporadically by satellite phone as the heat of the fire has melted all the power and communication lines to the area.

"He won't leave our ranch," she said.

"He is hosing down buildings and trying to keep all of our barns from being burnt down with a whole lifetime worth of assets.

"...Everybody is doing what they have to do to protect their belongings. There are homes on the road that don't even have house insurance on them so they are just trying to keep the fire away.

"It is very nerve wracking.

"Everybody has high adrenaline and we are looking for more help and more response form the forest service."

Currently 100 fire fighters are on scene with 40 joining the battle on Wednesday. Nine water-bucket carrying helicopters and eight air tanker are helping their efforts. The smoke is hampering efforts, as at times it is so thick it is dangerous to fly.

The fire comes at a terrible time, as the ranch is getting ready to gear up for summer business. While there are already confirmed bookings Menhinick believes this will affect short-term bookings and even people who just want to come out and trail ride.

"For us as business owners this is when we make our income and the area has just been ravaged by fire," she said.

"So far we have been able to protect our business, but we are on pins and needles. I am in Lillooet and every phone call I get, the first question I get is, 'has it burnt down?'

"So it is a little bit scary."

A reception centre for those evacuated from Gun Creek Road was set up in Lillooet. If more evacuations are needed it is likely a reception center will be set up in Pemberton.

Highway 40 connecting Gold Bridge to Lillooet has also been closed, meaning any evacuees will have to leave the Bridge River Valley via a forest service road, known as the Hurley, to Pemberton.

In Whistler residents woke up to air thick with smoke Monday.

Early rumours had a new fire breaking out in the Daisy Lake dam area, but the Coastal Fire Centre quickly threw water on those after determining that no new fires were burning in the area. While there is a fire burning in Garibaldi Park it is less than one hectare and mostly contained.

It is more likely the smoke is coming from Tyaughton Lake area fire, which is about 65 kilometres west of Lillooet.

There are a number of outdoor activities businesses in the area, which is popular for backcountry hiking, mountain biking and fishing.

A worker reached at Tyax Resort said: "We are too busy to talk right now."

Whistler residents Jane and Dale Douglas have a home within the evacuated area and run an air service locally.

"I think the way the fire is going we think it has missed our place," she said adding that the phones have been out for two days already along Gun Lake Road.

There was no answer by phone at some of the other businesses in the area.

"There are some cabins a few homes and they have been evacuated and there is an evacuation alert for the surrounding areas as well.

"We did have winds (Sunday) that moved the fire in a southerly direction toward Carpenter Lake and fire officials are hopeful that this will provide a natural barrier and prevent the fire spreading any further in that direction.

"We are getting significant smoke off this fire."

The fire was person-caused and the circumstances are still under investigation.

"Conditions are drier than usual for this time of the year. We are seeing conditions more similar to mid-summer and because we do have a hot and dry forecast for the next week or so we are being very cautious."

For more information on evacuations please contact the Squamish-Lillooet Regional District at 1-800-298-7753.

There are also road closures associated with the fire. For information call 1-800-550-4997 or visit www.drivebc.ca.