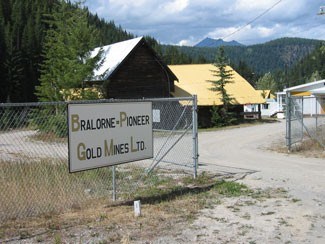 The Bralorne gold mine has produced its first gold bars since it closed down in 1971.

"We have four dory (gold) bars right now, each about 60 ounces," said president and general manager of the mine Bill Cocken in a voice edged with pride.

"They are sitting in the bank right now."

The company has also shipped off tons of grey-coloured gold powder to an American company for treatment. It must be treated with cyanide to get the gold, a procedure no longer allowed in B.C. Cocken expects to get six to eight ounces of gold out of every ton of powder.

With gold trading around the $525 per ton mark for the last few months Cocken said the mine is in good shape economically.

"If we run .22 ounces per ton we can break even on that and we are doing better than that," he said.

Although it has long been suspected that there is a substantial amount of gold in the area declining gold prices kept mine owner Bralorne Pioneer Gold Mines Ltd. above ground until recently.

Since the machinery got up and running last April the mine operators have been concentrating on processing all the material left in sky-high storage silos when the mine closed.

That’s an important part of the operation since that "development mud" running through the machinery will fill up any crooks and crannies as it travels trough. That way no valuable gold nuggets will get caught up in the machinery once ore from the mines begins to be processed.

And, said Cocken, he is looking forward to finding a few of those gold nuggets which are part of the folk lore which surrounds mining in the area.

"There will be some big nuggets," he said.

"We haven’t found any yet, but I am sure once we get into it we will. There are lots of stories going around Bralorne about them."

Miners hope to start bringing ore out of the Peter vein of the mines in the next couple of weeks. Over the last several years a number of high-grade gold discoveries have been made in that area.

Cocken expects about half an ounce per ton to come out of the Peter vein, and it’s expected that about 2,500 tons will come out in the next month.

There has also been exploration of the 51b Footwall vein which, said Cocken, is to be explored in the coming months.

There are two main mines in the area, the Bralorne and the Pioneer. In their glory days the two mines supported a town of 10,000 with schools, banks and even a bowling alley.

By 1971 low gold prices had forced the shutdown of the entire operation, but not before they had produced an astounding 4.1 million ounces of gold, which today would be worth $1.6 billion US.

The Bralorne mine opened in 1932 and the combined operations began a legendary era of gold mining. Old timers who worked at the Bralorne and Pioneer during this period still talk excitedly about the clumps of gold as big as a man’s fist.

Today there is about 52 staff at the mine, including a host of new miners. Many of those have come from the now closed Con mine in Yellowknife.

All the activity has been a shot in the arm for the Bralorne-Goldbridge area, which hopes the mine, will raise the area’s profile.

Locals also hope the activity at the mine will translate into better support of local infrastructure, including the Hurley Road, which at the moment is only maintained in the summer.