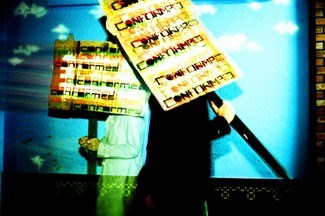 What: Shot in the Dark’s Conformed Premiere

Break the mould and kiss your commercial appeal goodbye.

While in production with her second all-girl snowboard film, local filmmaker Lauren Graham (I know she recently moved to Vancouver, but she’s still local to me) found herself pondering the duality of her craft. It was disappointing to see new offerings by innovative filmmakers resorting to a formulaic approach, yet the reality of creating a product for a market couldn’t be so easily discarded.

Out of the existential musings came the name of her next film: Conformed .

It’s laced with irony. Graham’s previous works are anything but.

Her first all-girl snow film, last year’s Shot In The Dark , oozed hours of heart and charm into just over 10 minutes. The snowboard footage was basic, but the film was something more – it captured the essence of snowboarding with the girls in a way that token chick segments in big budget productions never will.

With good friend Jackie Cerminara in her corner, Graham went on to win the 72-hour Filmmaker Showdown contest at last April’s Telus World Ski and Snowboard Festival with Insert Meaning Here , a lyrical, beautifully shot piece that challenged the spellbound audience to make the world a better place.

The Best of Show prize included a $5,600 Panasonic mini DV camera, which she was happy to put into action for her sophomore snowboard flick.

, like Shot In the Dark , clocks in around the 12 minute mark and features mostly locally-shot footage of local rockettes like Susi Davis, Pilar Peterson, Molly Milligan and Dominique Vallee. There’s a bit of California in there, some Mammoth Mountain action and some bits from long-time pro Shannon Dunn’s second annual all-girl P!Jamma Party snowboard invitational in Tahoe.

"The film has a lot of passion and underlying meaning in it if you're looking. But if you're not, its a snowboard film," said Graham.

With other film-related projects on the horizon, Graham has determined Conformed to be her last snowboard film.

"I hope some Whistler girls keep the tradition alive, but this young cowgirl is hanging up her hat for good," she said. "That was always my biggest problem, wanting to be more of an artist than a snowboarder. I actually suck at snowboarding. It’s been the greatest job ever though, and I wouldn't change anything."

The DIY project will premiere this Thursday at the GLC along with a set by local band The Fall of Summer. It’s the same place Graham chose for her art and film teaser night back in August, which helped raise the necessary funds to duplicate Conformed , Shot In The Dark and Insert Meaning Here on to DVD.

This time around she’s paying it forward. Her film’s signed, sealed and delivered so any donations collected at the event will go toward duplication costs for TFOS’s first CD.

At this point, the only thing the event is lacking is a coffee sponsor to provide the necessary materials to serve up gallons of Graham’s current beverage obsession.

will screen at approximately 10 p.m.