GranFondo a success, and only the beginning 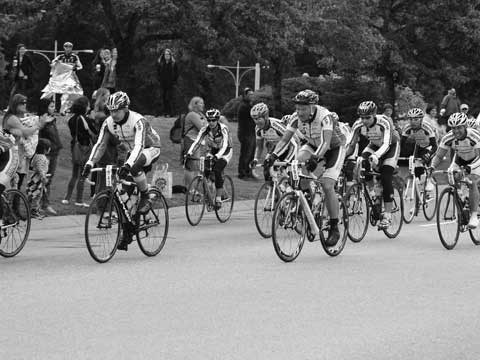 Whistler has hosted some big sporting events in the past, but nothing with as many participants as the RBC GranFondo.

On Sept. 11 a field of over 4,000 riders made the 122 km journey from downtown Vancouver to Whistler, with organizers rolling out the red carpet the whole way - all of Georgia Street was closed, and two lanes through Stanley Park and over the Lions Gate Bridge. From there, riders had much of Taylor Way to themselves before turning onto the Upper Levels Highway where they had their own express lane to Whistler.

Riders took anywhere from just over three hours to nine hours to complete the ride, with another group of roadies joining the group in Squamish in the "Medio" category.

Modelled after events in Europe, the GranFondo - which translates literally as "big ride" from Italian - quickly became one of the biggest events of its kind in North America. Originally organizers planned to host 2,500 riders in the inaugural year, but with strong interest from the start they asked stakeholders and received permission to increase the field to 4,000 riders.

"Obviously, as event organizers we will dissect everything, and obviously there are some areas where we can improve, but the general feeling in the cycling community is that it's an exciting event that will only grow in popularity over time," said Neil McKinnon, one of the race's co-founders.

"There were two big criteria we had when we decided to stage the event... one was safety and one was integrity. When it comes to safety it's our job to analyze the event, and we went to a point where we actually put cameras on riders so we could watch the video and dissect it. There are a lot of people with opinions, and we're gathering feedback to see how we can deliver a better, safer environment.

"As for the second one, integrity, we're asking people to devote a weekend of their summer. It's a big investment time-wise, and we wanted to make sure it was a great experience. I think from that perspective we really nailed it. We do have an opportunity to expand it from that perspective, because we have people telling us that it was really fun and that they would do it again."

On Monday, Sept. 13 the organizers opened registration to founding riders, and within a short period of time the amount of demand crashed their servers. They moved onto another portal at Amazon.com, the second largest in North America, and it crashed again. Over 1,500 riders and volunteers from this year registered in the first 24 hours.

Registration for the general public will open this Monday, Sept. 20, and McKinnon expects the event will sell out. They will make a decision whether to increase the size of the field once they've completed their analysis of the event.

Whistler Mayor Ken Melamed was one of three Whistler council members to do the ride, along with Tom Thomson and Chris Quinlan. He believes that Whistler is able to accommodate a larger event and gave the organizers high marks for a smooth first fondo.

"A lot of things were extraordinary about it," said Melamed. "It's not often that an event comes along that really exceeds everybody's expectations, and right out of the gate these guys had a winning concept and by all accounts they delivered with flying colours."

As for the resort's ability to one day accommodate 10,000 riders, plus friends and family members, Melamed is confident it can be done.

"One of the things that was really a pleasant surprise for me was to see how perfectly suited Lot 4 was for the event - can you imagine what it would have been like if it hadn't had pavement on it?

"And for next year's event, already thinking ahead, we'll have the celebration plaza finished, which can accommodate 5,000 people. It should really be no trouble at all for doubling the size. Tripling the event might be a challenge, but we've got time to work up to that. And really this is the perfect fit for Whistler. We do have the infrastructure, and if it's not ready-made then it's easily adaptable to upscale and upsize the event."

Roger Soane, the general manager of the Fairmont Chateau Whistler, estimates that they housed about 50 riders on Saturday night, and has heard nothing but positive response from other hotels, restaurants and businesses in town.

"I thought it was a great event, and we've talked in the past about what Whistler needs to do get on the map and stay there and here it is - we're a great resort and we do events really well. I think the Olympics proved that, and the GranFondo was a spectacular event for Whistler. Everybody was happy, the rain co-operated and it was great for the village."

The only challenge, said Soane, was that all the riders "wanted to sleep with their bikes." However, he says the hotel had more than enough bike storage to accommodate guests and could accommodate a lot more riders in the future.

Michael Brisbois, the general manager for The Keg and Brandy's, said they received notice in advance from Tourism Whistler and other organizations that it would be busy on Saturday, and took steps to accommodate the crowds.

"We had our waiters start early and our kitchen open a little earlier as well, as we were expecting a big influx of business into the resort that night," he said. "It went very well, people were happy and it was a great clientele for the town. I think next year we would possibly open a little earlier, maybe 4 p.m. because there were already people waiting to get in that had done the ride and we could have started earlier."

Brisbois has talked to other restaurant and shop owners and has heard that it was busy all day - first with families of riders looking for places to eat lunch and shopping before heading to the finish line, and later with riders celebrating their day.

Mike Edwards also did the ride, as well as service a large number of riders and their families at his café businesses around Whistler. In both capacities he was extremely happy.

"As a rider it was fantastic, and really well done," he said. "It was similar to an Ironman, where everything has been thought of ahead of time, everything was put into place," he said. "The finish line was also incredible, really social with friends and family everywhere, and they had blankets to hand out when it got a little cooler. Everybody was really happy with the attention to detail."

As a business owner, Edwards says he would need to compare his numbers at The Lift Coffee Company, Java and his other businesses from week to week, but expects that it will be a busy one.

"Really, 4,000 riders brought about 12,000 people to the village, and we got a tonne of traffic," he said. "The race really brought people up here on a weekend where the weather wasn't that great and it would have been a lot quieter."

In terms of demographics, GranFondo riders are a dream demographic for Whistler. The largest category was Male 40 to 49 with 1,178 riders at the start line. Male 50 to 59 represented another 799 riders, and Male 30 to 39 another 492.

While the majority of riders were from the Lower Mainland there were also a large number of riders from Washington state and Alberta. A quick scan of the results also found riders from Nova Scotia, Ontario, Colorado and other destinations.

There was only one serious incident reported on the course, involving a rider that crashed on the Upper Levels Highway. According to media reports, triathlon organizer John Botelho appeared to lose control of his bike on a downhill section and fell, hitting his head. Doctors induced a coma as a result of brain swelling. He was still unconscious at press time.

Race organizers said they were investigating the incident and will look for ways to make the race even safer next year, but by all accounts it appears to be an accident. No other injuries were reported.