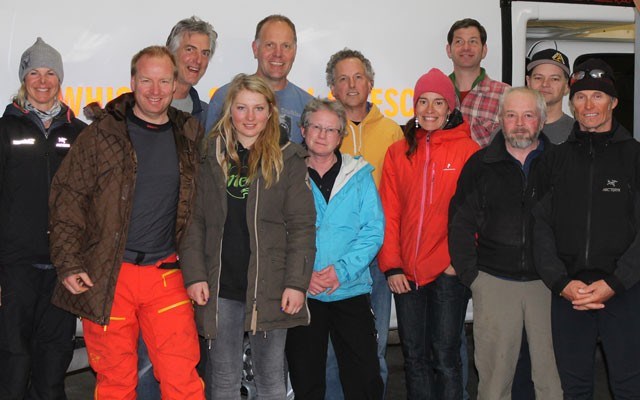 SAR reunion Norwegian Julie Abrahamsen (centre left) was rescued after going missing while snowboarding. Her father, Knut, made a donation to Whistler Search and Rescue. Photo by Alison Taylor

Knut Abrahamsen was picturing his daughter's funeral, not sure whether life could go on without her.

"I saw everything falling apart," he told a small group of Whistler Search and Rescuers (WSAR), of those dark hours on that January weekend when his daughter Julie had been missing for three nights in the backcountry.

His hand on his heart, trying to control his emotions as he remembered those days when he was a world away in Norway and his 20-year-old daughter was missing in Whistler, Abrahamsen told WSAR members how deeply thankful he is that they found Julie at the rugged base of Wedge Mountain, at least two days walk away from civilization, with the most difficult terrain still to navigate.

"I cannot express how we feel. We are so deeply respectful for what you guys do... You made my day and my life. I'm not sure if I would be able to continue after that."

Abrahamsen flew to Whistler from Norway this week to deliver a cheque for $5,000 to WSAR, some gift certificates for beer and to shake the hands, and hug, these men and women, who risk their own lives to save others.

"It means a lot you coming here too," said Binty Massey, one of the two rescuers on the ground who found Julie.

On Tuesday, WSAR manager Brad Sills walked the team through an incident debriefing, trying to get into Julie Abrahamsen's mindset as she made the decisions over those fateful four days.

"I'm trying to think like you would be," said Sills. "We're not here to judge."

And so, the 20-year-old Norwegian patiently retold her story again — how she made the decision to follow skiers out of bounds, how she lost her way and found the creek and crossed it a few times to make travel easier, how she took off one of her wool layers because she was getting warm, how she found it easier to walk under the big trees, knit tightly together because there was less snow there, how she didn't really think about following her tracks back uphill or staying still, her mission was to get out.

"At any point did you feel fear?" asked Sills.

She answered: "I wasn't panicking too much."

But Julie was thinking about her dad in Norway, who she promised to check in with every day after she was on the mountain.

"I mostly thought about my dad, that he was going to notice pretty soon," she said, sitting beside him at the WSAR office.

She thanked her rescuers too, recognizing her mistakes, before she and her dad hit the road to Revelstoke for some snowboarding.

"Mountains are dangerous and mountains are fantastic," said Abrahamsen. "It's very difficult to stay away from them."

Added her dad to the SAR team: "I guess you have the same love and respect for the mountains."