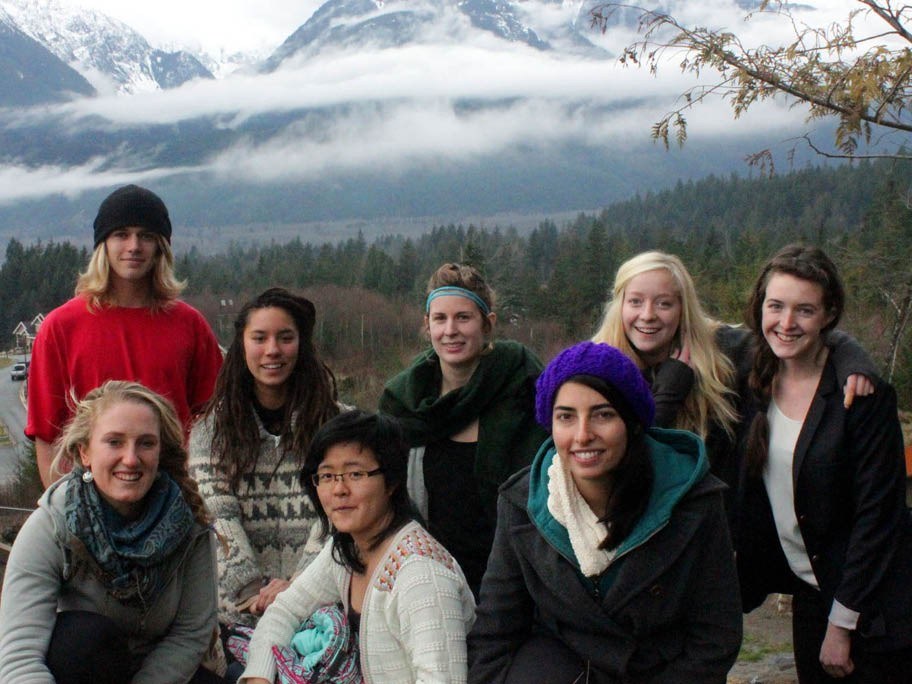 Inspired by extraordinary encounters with elusive white spirit bears, breaching humpback whales and the people of the Great Bear Rainforest, Quest University student Magdalena Angel is determined to take action to try to save this threatened coastline.

She is spearheading an ambitious awareness campaign in the form of a youth-led paddle to protest the proposed Enbridge pipeline project. This six-day, 53.4 kilometre paddle is set to take place in June, and will embark from Hartley Bay – home of the Gitga'at First Nations.

Angel said her life was forever changed during her second visit to Great Bear Rainforest. A remote area covering more than two million hectares of pristine temperate rainforest on the north-west coast of B.C., her first trip to the area with her Quest University Ecology class in 2009 left her yearning for more after being welcomed warmly by the community of Hartley Bay and experiencing the rainforest firsthand.

"It's one of the wildest places that I've ever been," she said of the area. "It was so lush, so full of life."

And so, with a passion so clearly conveyed through her words, she describes how she made her way back to the region exactly a year later, to volunteer at a whale research station, Cetacealab, situated on Gil Island. A significant moment for her came when the photographers from the International League of Conservation Photographers (ILCP) visited the lab to photograph whales as part of their filming for the documentary, SPOIL, on the threats the pipeline posed to the region.

She says the encounter with the photographers, along with in-depth conversations with local leaders, compelled her to take action to protect this remarkable part of the world from development threats, namely the Northern Gateway Project.

Enbridge's Northern Gateway Project consists of a proposed 1,172 km-long oil pipeline from the Alberta tar sands project to Kitimat, B.C. Approximately 525,000 barrels of crude oil would be transported per day, which would be collected by super tankers and exported to the U.S. and China. The Gitga'at First Nations strongly oppose this proposal because the tanker route is set to go through their territory, and their marine resources such as salmon, could be put at risk.

"I am concerned for the future of what lies ahead on this coastline," Angel said. "I want to support the First Nations communities and people of the coast who are working hard to preserve the culture and the integrity of this beautiful area."

And so the campaign idea formed in her mind.

"And the connection was so clear to me that this was what I felt was my purpose for life... and I had this opportunity and this real-life connection already with the place."

Angel chose a youth project "because a lot of focus has been on the elders but the youth haven't had a chance to speak their thoughts," she said.

"One of the goals is to engage youth to take action on issues, and especially this issue which is affecting them in their home."

Other learning opportunities for the youth will be team building activities, as well as learning how to paddle the traditional canoes, said Angel.

Her plan is to facilitate education on the ecology of the land and how environmental, cultural and political issues come together. "I've tried to keep the goals really positive so that it doesn't become such a political struggle — it's more about positive growth," she explained.

Nine Quest students and a group of Hartley Bay youth have now signed up to partake in the paddle.

One of the paddlers, Quest student Kirsty Graham, said she was inspired by Angel's stories from the rainforest. "(Angel) brought back such interesting stories and really brought this place to life in my imagination," she said, "and her passion really made me want to become involved."

Meeting the people who would be directly affected by the pipeline influenced her into action, said Quest student Erica Benson. "And so after being there, I just recognized the magic of the forest, and how precious it is. I would like to help spread the message and awareness of the pipeline," she said.

A big element to the campaign lies in raising funds for the paddle, a goal for which the group have used some ingenuous ways. It has done some busking, hosted a concert, a film night and recently launched a campaign on Indiegogo — an online fundraising website. And on Feb. 11 they will host a second fundraising concert, this one in Vancouver, featuring the bands Jasper Sloan Yip and No Sinner.

It's all about raising awareness, getting political action and joining what is now a larger movement, says Angel.

"I realized I am not building this movement," she said. "I am contributing to it with my own small movement."

Check out www.gbryouthpaddle.org for more information.