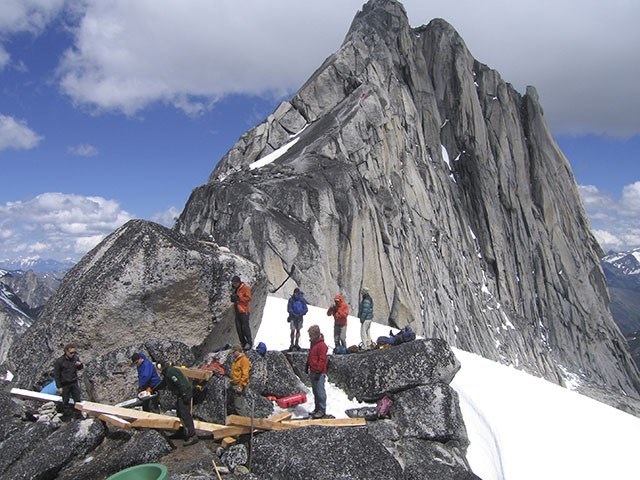 Buggy Loo Volunteers with the Friends of Bugaboo Park work to install a loilet at a remote but frequently visited Pigeon/Howser Col in the Bugaboos.

The very first time he laid eyes on the Bugaboos in 1993, a collection of tall granite spires jutting straight up from the glaciers at their bases, Marc Piché admits he was, quite simply, blown away.

“I’d never seen anything like it. It was the first big granite mountains I’d ever seen,” Piché recalled. “The alpine environment and the quality of the climbing — it’s a really special place. Once you’re out there, it’s really remote; you have to take it seriously. You can still have very real days and very real experiences there.”

As assistant manager of Canadian Mountain Holidays’ (CMH) Bugaboo Lodge for the past six years, from where he guides heli-skiers through the winter months and climbers through the summer, Piché, 34, has since become intimately familiar with “the Bugs”, an area revered among climbers around the world as one of the great alpine playgrounds.

And although Piché is a resident of Canmore, Alberta, he estimates between his work days and his own personal climbing time that he spends between 150 to 200 days a year in the Bugaboos, which are located in the Purcell Mountains of southeastern B.C., just southwest of Golden.

But while the Bugs are well known and deeply loved by countless members of the climbing community, until the last couple of years, Piché said, those climbers were helping themselves to giant helpings of pleasurable adventure, without giving back to the area that provided their experiences.

But now, after several years of dedication, the Friends of Bugaboo Park, a group spearheaded by Piché, recently earned its official status as a registered society.

Following its mission to act as stewards of Bugaboo Glacier Provincial Park by working with government and stakeholders to maintain the natural and recreational integrity of the Bugaboos, FOBP members are helping care for the wilderness area by organizing volunteer groups to carry out much needed access trail maintenance and other projects, and through raising funds and collaborating with B.C. Parks and the Alpine Club of Canada, who operates the area’s Conrad Kain Hut.

Working alongside Piché, a fully certified guide with the Association of Canadian Mountain Guides, are his wife, Lilla Molnar, also an ACMG guide, and Squamish’s Chris Atkinson, an ACMG guide who with Piché co-authored the area’s essential guidebook, The Bugaboos: One of the World’s Great Alpine Rockclimbing Centres, published by Squamish based Elaho. Rounding out the FOBP board are Invermere climber Tim McAllister, Canmore based assistant ACMG guide Sean Isaac and Calgary biologist Matthew Collins.

“It’s not a single thing that makes the Bugs special,” said Atkinson, who worked as a Bugaboo Provincial Park ranger from 1987 thru 1989. “There’s amazing climbing and it’s in a really remote area — the Purcells are one of the few mountain ranges in North America not bisected by a road. But it’s also such an international climbing draw. You can go up to Applebee campground and meet climbers from the U.S., Europe, Canada and Korea. Because of that, the Bugs is sort of everything to everybody, whether they’re there to do a big alpine route or a scramble or one of the classic rock routes. It’s a very powerful place.”

While the FOBP is currently enjoying a healthy amount of support from climbers and area users, that wasn’t always the case, Piché recalled.

For the most part, climbers were taking, but not giving — including those from the Coast Mountains.

“Although they’re in the East Kootenays, the Bugs are part of the Rockies,” Atkinsons added. “But there’s a brilliant Coast connection with climbers from Vancouver, Squamish, Pemberton — if you’re in the Brew Pub in Squamish, the Bugaboos will come up in conversation. It’s in no-one’s backyard, but everyone’s backyard.”

Piché’s first project, carried out before the FOBP was formed last summer, was to install toilets at two key locations, which see some of the highest climber traffic in the area.

“There was a real human waste issue,” Piché said. “There was lots of stuff under the rocks. Then we started seeing it in some of the classic drinking water spots. But everybody knows, when you’re leaving camp at 4 a.m., by the time people reach the Bugaboo/Snowpatch Col, or the West Ridge of Pigeon, they’re ready to go, they’ve got no choice.”

With a price tag of about $5,000 each, two “green thrones” — an open air perch situated above a replaceable barrel — were installed, in 2004 at Snowpatch/Bugaboo Col and at the far end of the West Ridge of Pigeon Spire the following summer.

While B.C. Parks covered the cost of the toilets, volunteers, including ACC members, help maintain them, while CMH, a major partner of FOBP, provides the helicopter flights necessary to remove and deliver full and empty barrels.

In addition to the toilets, on a designated trails day during the summer of 2006, a volunteer crew replaced chains, cleaned up old cable and replaced some stone steps that had been washed out on the steep access trail leading from the parking lot to the hut.

More recently, FOBP volunteers have posted laminated signage at the hut, outlining the “leave no trace in the backcountry ethic” and hut behaviour guidelines. Future projects include another trails day scheduled for later this summer in coordination with B.C. Parks and the ACC, a series of interpretive signs to be posted in the hut, and another toilet for East Creek Camp, frequented by climbers tackling routes on the Howser Towers.

In recognition of his efforts, Piché was made the recipient of CMH’s 2006 President’s Award, while the FOBP was delighted the be the benefactor of last October’s Night of Lies slide show in Banff, to the tune of $1,700.

Now that the FOBP have initiated some action, Piché said volunteers are eagerly signing up to help.

“It’s growing, now there are lots of people interested in helping out,” he said. “We have no lack of people willing to volunteer their time and resources. It’s taking off, people see things happening and they want to help out. When we put the toilet in at Pigeon Howser Col, we had a huge crew helping out.”

Still, he added, the group could use some help getting its website up and running.