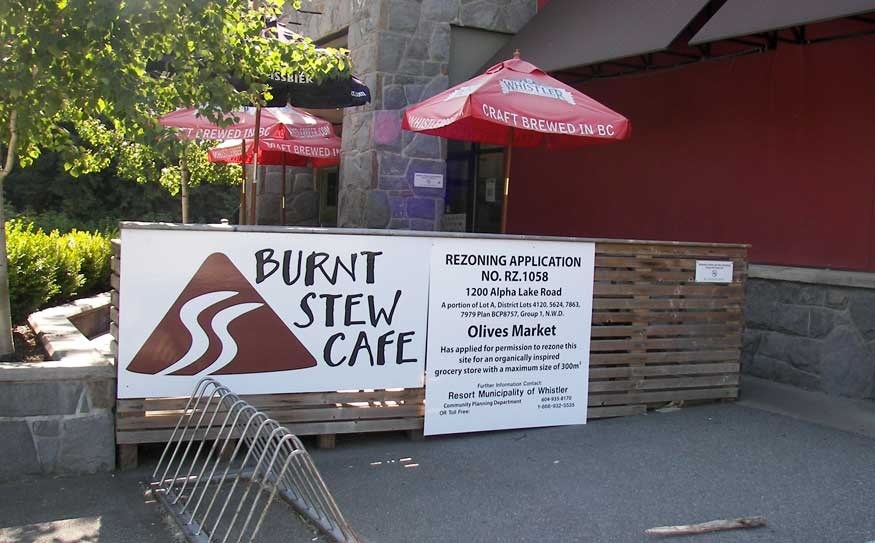 The transformation of Function Junction continues with the next big change being the introduction of what a fourth generation grocery retailer describes as an organically inspired grocery store.

The project is the creation of Angela Perzow, a seven-year Whistler resident who managed Kitchen Quickies in Squamish for a short time, and has years of experience in Whistler's real estate industry.

Perzow has partnered with Martha Heintzman to start planning a 300 square metre store in the space occupied by Colin Pitt-Taylor's Burnt Stew Café.

Their vision is to renovate the space this fall and open a grocery store by the American Thanksgiving weekend, Nov.22.

Olives will be a full-service grocery store that will carry about 80 per cent organic stock, said Perzow. She added that carrying 100-per cent organic offerings is impossible because some products, like organic ketchup, are very difficult to find.

"We'll be checking for the GMO (genetically modified organism) because I don't want any GMO food in my store," Perzow said. "That's a really, really big one for me. What we're trying to do here is a Whole Foods meets convenience store."

According to Perzow, her father was one of the main driving forces behind Capers. He came to Vancouver in the 1980s to run the lone Capers store. In his time with the grocery company Barry Perzow opened new Capers outlets and created a very successful brand, which was later purchased by Whole Foods.

"I'm hoping that our store becomes the store where you stop in on the way up to get stuff and on your way down," said Perzow. "I want the stuff in the store, the specialty items in the store, to draw people."

There will be an emphasis on local products, baked goods and produce, and Perzow said she is open for business with anyone who produces something locally.

The store is scheduled to start small with four employees, a juice bar and high quality foods operating seven days a week from 10 a.m. to 7 p.m.

"I want the shopping experience at Olives to be very different," she said adding that she's very excited about the location in Function Junction. The space Olives will occupy has 82 parking spaces and room for potential expansion.

"I had this vision five years ago that Function was actually going to be the coolest place to go and I see that over the last seven years it is heading in that way," said Perzow. She said she finds herself spending lots of time at Function Junction because her yoga classes are there and her son will soon have karate classes there.

"It is all there," she said. "I see the future of Function, I think it's Granville Island 30 years ago and I really believe in Function as the new up and coming place in Whistler where we should set our sites on for sure."