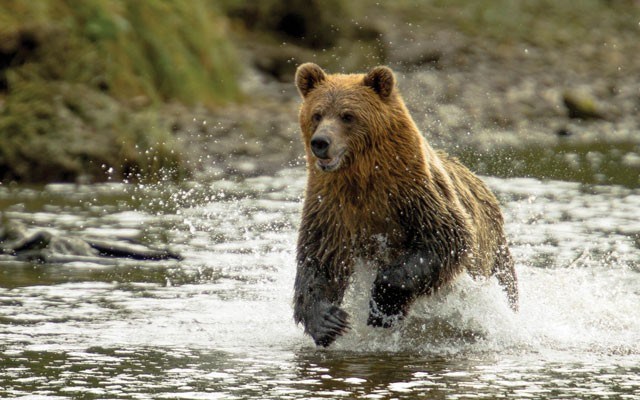 Can't Bear it Hunters are questioning the details of the new provincial government's proposed ban on trophy hunting grizzly bears, like this one photographed in B.C.'s Knight Inlet. <a href="http://www.Shutterstock.com">www.Shutterstock.com</a>

"It's not about the bears," said Scott Ellis, executive director of the Guide Outfitters Association of British Columbia (GOABC).

Ellis said that the ban — which will still allow for the hunting of grizzlies so long as the hunter harvests the bear's meat — is about bowing to public opinion and the "whims of radicals," rather than preserving grizzly bear populations.

The B.C. government already has "robust" measures to ensure that grizzly populations remain strong, said Ellis. It only allows hunting in areas where the population of grizzlies can handle it. "(The B.C. hunt) is one of the most highly controlled hunts on the planet," he said.

In a Monday, Aug. 14 interview with CBC News, Forests, Lands, Natural Resource Operations and Rural Development (MFLNRO) Minister Doug Donaldson said that "it's not a matter of numbers. Society has come to the point in B.C. where they are no longer in favour of the grizzly bear trophy hunt."

The trophy hunt ban will come into force on Nov. 30. The government is also banning grizzly hunting in the Great Bear Rainforest altogether.

In that Aug. 14 interview, Donaldson also said "Hunters will no longer be able to possess the hide or the head or the paws of the grizzly bear... there's not going to be any loopholes."

The statement has led to confusion for hunters. Ellis fears that now hunters will be required to leave those parts at the scene of the kill.

Under the current system, hunters must show their kills to conservation officers, who in turn ascertain important information, he explained.

"We're not going to know whether we're shooting males or females," he said. The policy, he added, could also put hunters in danger, as they will have to skin the animal then and there, even if they are pressed for time.

In response to follow-up questions sent to the MFLNRO, Donaldson said the government wanted to announce the ban to make it clear that this fall's trophy hunt would be the last.

"The specifics of what will happen to the bear parts will be determined through the consultation process to be launched this fall," Donaldson said in an emailed statement.

"We think it is important for all those who are interested in our wildlife resources to have a say in wildlife management, so we will be engaging in a collaborative process, to hear from First Nations and stakeholders about the implementation."

Ellis feels that the new rules are politically motivated and are designed to discourage the hunting of grizzlies altogether. He feels they reflect a major divide between rural and urban B.C.

"I get that Vancouver don't like seeing a bear shot," he said. "(But) you can't pick a particular species and say we're going to put it on a pedestal. I think that's poor wildlife management."

"We don't feel that any grizzly hunting is wise or necessary. It's not wise because the species faces enormous threats. If we don't adopt policies more conducive to the bears, in another generation, there may be very few left in our province," he said.

Grizzly bears used to roam all over the continent, he said. "(But) they've been persecuted like vermin and eradicated from much of North America."

Closer to home, Johnny Mikes — field director of the Coast to Cascades Grizzly Bear Initiative — said that the trophy-hunting ban makes no difference to grizzly populations in this part of British Columbia.

Hunters are already prohibited from hunting grizzlies in southwest British Columbia, he explained. That's because levels of grizzlies in the area are precariously low, he added.

"We don't talk about the hunt," said Mikes, when asked about whether he is in favour of an outright ban on hunting grizzlies. "We need to talk about how we help endangered species to come back, because in southwest B.C., that's the issue."

Mikes said Coast to Cascades is pushing for a "management plan for each threatened population in the coast to cascades region that ensures populations will recover."

The organization is also calling on government to inhibit the development of valley bottoms to ensure that grizzly habitat is not fragmented.

"It's important that people don't feel complacent. There are populations in southern B.C. that could disappear, even though the hunt has been curtailed," he said.