Speaker at Prairie Festival suggests some should join in civil disobedience to fight climate change
Oct 16, 2019 12:00 AM By: Allen Best 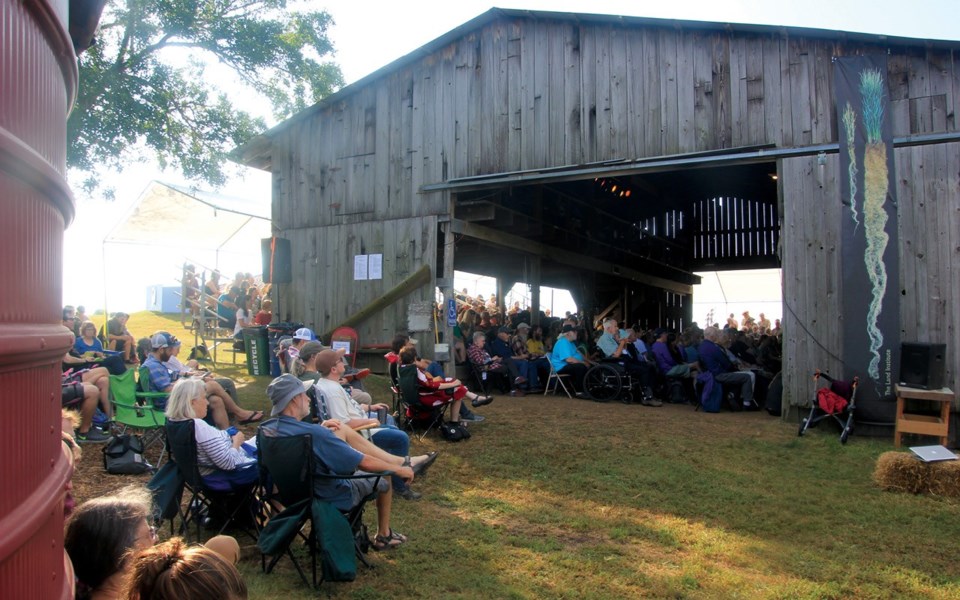 Taking Action Hundreds gathered at the Land Institute to learn about the climate crisis. The new Kernza™ plant, with its very long root system, is pictured to the right of the barn. photo by Allen Best

Bill McKibben didn't always make a habit of getting arrested. He was a wunderkind, a Harvard graduate who became a staff writer at the New Yorker at the age of 25 but also was a competitive cross-country skier, ran a homeless shelter, and taught Sunday school at a Methodist church.

On Sunday morning in late September, the 58-year-old McKibben was at The Land Institute in the middle of Kansas farm country, preaching about the imminent crisis of climate change. It is, he said at the Prairie Festival, a cause of such existential importance to civilization that some people, especially those who are older, with less to risk, should join him in civil protests that will likely cause them to be jailed, as McKibben had been the month prior to his Kansas visit.

McKibben's 1989 book, The End of Nature, was arguably the first general circulation call to curb greenhouse gas emissions caused primarily, but not exclusively, by the burning of fossil fuels. Since that book came out 30 years ago, atmospheric concentrations of carbon dioxide have increased 65 parts per million (ppm). That compares with the estimated increase of 70 ppm during the first two centuries after the industrial revolution. Climate scientists for several decades have warned that greenhouse gases could trigger wild climatic gyrations and, of course, rising temperatures.

It was getting hot on the Sunday morning as McKibben spoke, the temperature in nearby Salina, a farm town of 47,000 people, approaching the low 30s and humidity close behind. It wasn't a record, but it has been a year for record heat, each year now seeming to surpass the previous one.

Humans can do 10 per cent less work outside on a given day now as compared to the past, but productivity will decline 30 per cent a half-century from now, he said.

In this record-setting spree of heat, some places have struggled more than others. McKibben cited new individual marks of 53 degrees C in the Asian subcontinent.

"The human body can survive at 53 degrees for a few hours, but after that, your ability to cool off disappears. You just can't do it. On the trajectory we're on—scientists are clear—that kind of temperature will not become record-breaking and rare, but will become normal across much of the Asian subcontinent and central China plain. If that happens, it really means that people won't be able to live there any more than they will be able to live in the cities along our coasts that are already beginning to see the rise of sea level."

Seas have been rising, in part, because of melting glaciers. McKibben described seeing chunks of ice the size of 12-storey skyscrapers calving off glaciers in Greenland last year. The waves, 18 to 21 metres high, had a "kind of sinister beauty," he said. Those melting glaciers raise ocean levels some tiny degree.

If all of Greenland's ice melts, however, oceans will rise seven metres, submerging low-lying places like the Marshall Islands in the Pacific Ocean.

The Prairie Festival is the Land Institute's signature annual event, this year drawing upwards of 900 people who assembled on chairs in an unpainted barn, its floors still of dirt, the overflow crowd spilling out to sit on portable lawn chairs and on hay bales placed under trees and around grain bins.

The Institute was formed in 1976 by Wes Jackson with the goal of developing perennial grains that mimic the ways of nature. Civilization in the last 10,000 years has hewed to annuals such as corn and wheat and, in the last century, application of massive doses of petrochemicals. The Institute's motto is "transforming agricultural, perennially," and it's a big idea with implications for the carbon cycle. Perennials do a better job of leaving carbon in the ground.

Jackson left behind the security and benefits of a university job in California, conveniently close to the hiking trials of the Sierra Nevada and the cool breezes of Lake Tahoe, to pursue his vision of perennial grains.

One result is Kernza™, a plant with roots as deep as an elephant is tall. You can now buy kernza flour, such was used to make pancakes at this year's Prairie Festival. You can also buy a beer, Long Root Pale Ale, which is brewed by Patagonia, the outdoor apparel. It's tasty.

Organic carbon compounds also compose a third of human bodies. "We take carbon in every day, and we breath carbon out every second," said Fred Iutzi, president of The Land Institute. "It's ironic that we have managed to get ourselves into a situation where the word 'carbon' is fraught."

McKibben writes often for such magazines as Rolling Stone about the fraught state of the planet. He also leads a frantic speaking schedule.

In 2007, he and students at Vermont's Middlebury College, where he teaches, formed 350.org, now a powerful agent at fomenting protests directed at fossil-fuel interests. The group had a role in U.S. President Barack Obama's veto of the Keystone XL pipeline, which was proposed to transport bitumen form Alberta's oil/tar sands to the United States. That veto has been reversed by President Donald Trump, but Keystone XL remains unbuilt.

The effort was a triumph, showing that "it was possible to stand up to big energy," said McKibben. "A lot of the time you win. That's the thing about movements. When you fight, you often win."

Now comes an effort to alter lending practices of major financers of fossil fuel extraction. "The oxygen on which the fires of global warming burns is the money of the banks and insurance and asset managers," said McKibben. Soon, he added, his organization will call for people to cut up their Chase credit cards. And, he added, if that succeeds in altering investments by Chase, the world's largest lender for expansion of fossil-fuel extraction, it will have a tidal wave effect on Wall Street within hours.

In Kansas this year, McKibben's audience consisted of people in their 20s and 30s, devoted to agrarian reform, but especially older people, gray-headed, as is McKibben.

In speaking to such crowds of what he calls "experienced Americans," McKibben calls for civil disobedience similar to his own. He often cites the words of Dr. Martin Luther King, another non-violent revolutionary whose most famous writing was "Letter from Birmingham Jail."

Amory Lovins has been a revolutionary, too, but of a different sort. He was only 28 when his seminal work advocating a "soft path" for energy was published in Foreign Affairs in 1976. The 10,000-word bundle of big ideas was titled "Energy Strategy: The Road Not Taken." His arguments weren't immediately embraced, but his young genius is becoming more evident each year.

A mountaineer then, Lovins relocated to a Colorado where, in 1983 he co-founded the Rocky Mountain Institute, a now influential think tank. Lovins still lives in the house he built then in a secluded valley only 10 or 15 minutes on an unpaved road from Snowmass, the ski area where most people who "ski Aspen" actually ski.

There, Lovins raises tropical fruits without aid of fossil fuels, lacking even the simple combustion to burn old energy studies that he says would be the most productive use for them. "Just ask for the banana farm," he says.

In Kansas, Lovins mentioned arrest only once, during his explanation of concept he calls integrative design. He called it "arrestingly simple." The example he used was in pipes, fans, motors and ductwork. Creating designs at the outset that result in fatter, shorter and straighter pipes instead of skinny, long and crooked—the usual method, he said—can reduce friction 80 to 90 per cent, dramatically reducing the energy required for electric motors and fans.

"If everybody did that it would save a fifth of the world's electricity," he said. His team at the Rocky Mountain Institute observed a payback within a year on retrofits. In new construction, of course, the payback would be instantaneous.

LEDs are an example of improved technology, as distinct from design. They're 30 times more efficient, 20 times brighter, and 10 times cheaper, he said. He's not asking for personal privation, just smarter thinking.

It took a long time for Lovins' ideas to get traction. They have now. But energy efficiency still has yet to be fully realized.

"The energy we have saved in this country since 1975 is 30 times the increase in renewable supply," he said. "Yet the headline ratio­—and the hit ratio—is pretty much the opposite because renewables you can see on the skyline or on the roof, but energy is invisible, and the energy you don't use is almost unimaginable."

Writer Allen Best penned this essay after attending the Prairie Festival in September. Allen writes about energy, water, and sometimes agriculture from a base in Denver. You can reach him at allen.best@comcast.net or see other articles by him at http://mountaintownnews.net.