A three-day High Mountain Summit, which took place in Geneva Switzerland, has resulted in the adoption by countries around the world of scientific research systems that were developed in Western Canada's mountains. The summit was co-chaired by Dr.
Dec 29, 2019 11:00 PM By: Lynn Martel 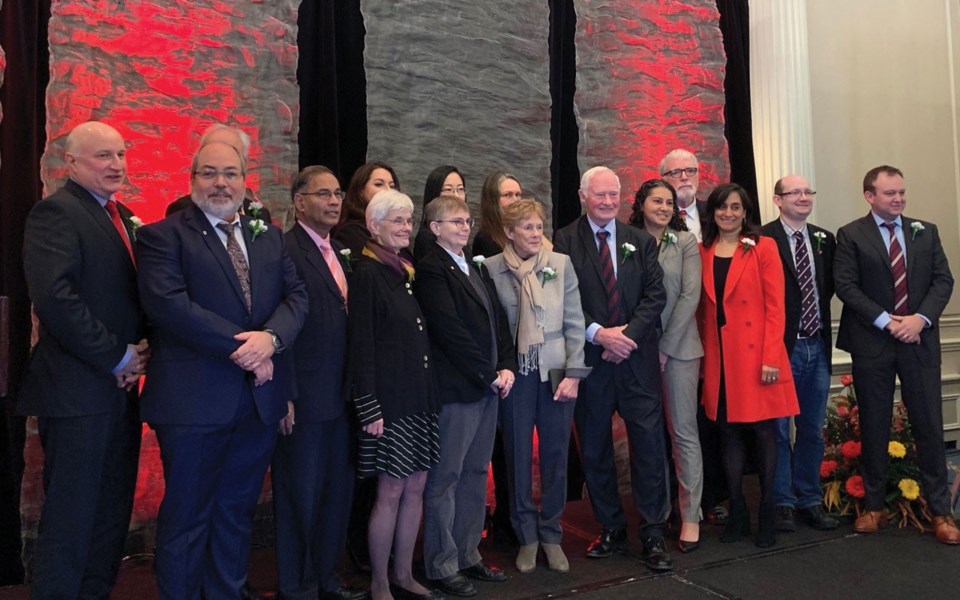 Dr. John Pomeroy, second from left (looking at the camera) accepts his Royal Society of Canada Miroslaw Romanowski Medal, along with other medal and award recipients. Photo Submitted

A three-day High Mountain Summit, which took place in Geneva Switzerland, has resulted in the adoption by countries around the world of scientific research systems that were developed in Western Canada's mountains.

The summit was co-chaired by Dr. John Pomeroy, Canada Research Chair in Water Resources and Climate Change and director of Global Water Futures (GWF) and the University of Saskatchewan's Coldwater Laboratory, located in the Canadian Rockies.

Attended by nearly 200 delegates from 44 countries including Canada, the US, Argentina, China, Pakistan and Norway, participants included scientists, researchers, government ministers and funding agencies including the World Bank.

Key organizing team member, Bob Sandford, Chair of Water Security with the United Nations University Institute for Water, Environment and Health collaborated with experts to outline the summit's program, and to draft the call to action.

"The UN's World Meteorological Organization (WMO) organized the Summit because of threats from climate change to the high mountains around the world," said Pomeroy. "High mountains are where the rapidly changing atmosphere intersects with snow and ice, key ecosystems, diverse societies and the headwaters for rivers that support over half of humanity."

Melting snow and glaciers have already passed many tipping points, added Pomeroy, while treeline and shrubs are advancing into alpine tundra and streams are warming.

"These changes affect not only the high mountains, but also the sustainability of mountain and downstream communities for water, food and energy security," he said. "The world requires better information and predictions for the high mountains."

The call to action is to be implemented by governments and scientific research programs around the world under the convening leadership of WMO. Through it, improved and integrated observation and prediction systems developed in Western Canadian mountains to provide enhanced early warning for floods and droughts will be adopted by other mountain countries.

"The outcomes of the summit should be of interest to all Canadians," said Sandford. "The high mountain regions of the world are now warming at the same rate as the Arctic, which is already warming three to five times faster than the equatorial regions. Alarmingly, climate change effects in both the Arctic and the world's high mountains are now beginning to appear and persist 50 to 70 years ahead of when they were projected."

Canada encompasses the Arctic and high mountain ranges, he added, explaining: "If climate impacts in these regions are accelerating, we should not expect it to take long for the same impacts to appear in advance of projection further south at all altitudes and latitudes."

In the wake of ice and permafrost loss resulting in landslides, massive rockfall and floods, Switzerland recently joined 16 other countries including Sweden, France and Britain in pledging to end all CO2 emissions by 2050 by incorporating their commitment into national law.

It's exciting, Pomeroy said, to watch an idea born in the Canadian Rockies result in a global call to action.

"It's wonderful to see the idea that became the Canadian Rockies Hydrological Observatory, the Coldwater Laboratory and eventually Global Water Futures (GWF) adopted as the international blueprint for helping to save mountain ecosystems, water and communities from the impacts of climate change," said Pomeroy.

"It shows that Alberta can export more than oil; it can export ideas that can help the world deal with the impacts of human-caused climate change to make our communities safer and more sustainable."

Pomeroy was also recently recognized for his work, being awarded the prestigious Royal Society of Canada (RSC) Miroslaw Romanowski Medal for how his research has dramatically improved the understanding and prediction of hydrology and climate where snowcovers form and where melting snow and ice provide freshwater.

As director of Global Water Futures, the largest freshwater research program in the world, he is tasked with finding solutions to water threats in an era of global change.

"His research explores fundamental hydrological processes in the field and predicts future water supply and quality using sophisticated computer simulation models," said the RSC in a release. "He is the world's most cited snow hydrologist."

As GWF director, Pomeroy leads a team of researchers conducting studies focused on how snow is distributed within a watershed, how the snowcover evolves through the winter season and how this relates to energy balance. These, and other studies, have helped define current understanding on a global scale of how climate warming is impacting the Earth's cold regions.

"I was very surprised and am very grateful for the medal," Pomeroy said. "I have spent much of my life researching water because it is interesting and enjoyable, and because I hoped it would someday be useful to someone. I have been very fortunate to have had the experience of working with great teams. It's wonderful to have our research recognized in this manner."

Established in 1994, the Miroslaw Romanowski Medal is awarded annually in recognition of scientific work relating to environmental problems.

Learning that the Romanowski Medal comes with a cross-Canada lecture tour, which he will deliver next fall, was icing on the cake, Pomeroy added.

"The tour will be a chance to describe the results of our scientific investigations on snow, ice, water and climate from western and northern Canada to people across the country and to talk to them about their water issues," Pomeroy said. "I am also hoping it might inspire young scientists to take up the challenge and find the excitement that I have found about this field of study."