Feasibility study welcomed in Whistler, Squamish and by SLRD
Nov 29, 2016 2:00 AM By: Pique Newsmagazine Staff 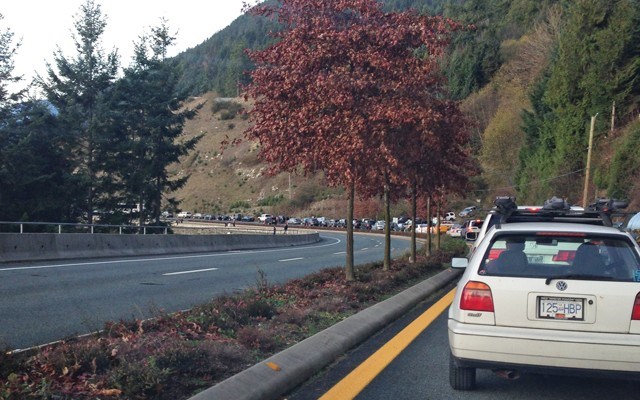 TRAFFIC TENSION On just about every weekend, there are thousands of visitors to Whistler who all travel Highway 99. A proposal for a high-speed rail service has gained support from local governments. File photo by Karen McKibbin

A high-speed rail line in the Sea to Sky corridor is likely years from becoming a reality, but the initial groundwork has been laid with local government support for a feasibility study.

In recent overtures to the Resort Municipality of Whistler (RMOW), the District of Squamish, the Squamish Lillooett Regional District (SLRD), and both the Squamish and Lil'Wat Nations, Squamish-based Sqomish Sea to Sky Developments has requested support for a feasibility study as the first step of a high-speed rail project.

John Matthews, a principal of Sqomish, did not return calls to Pique, but earlier this month told the Squamish Chief he is looking to gain support in order to acquire federal infrastructure funding for the study.

Squamish Mayor Patricia Heintzman said council is unanimously onboard with the idea. "What I like about this project is it's really future focused," she said. "We have to start thinking about more than building highways wider and bigger and faster."

SLRD chair Jack Crompton said the study is "not an inexpensive endeavour."

"If the feasibility report is funded and it proves that the project is viable, it's a pretty exciting opportunity," Crompton said. "We face some pretty significant challenges with transportation in our corridor. Any ideas to help address that are definitely worth looking at. (Sqomish) is building corridor support for the concept."

Both Crompton and Heintzman said high-speed rail could prove to be an ideal solution for the traffic congestions that plague both Whistler and Squamish.

"The last two years in Squamish we had exponential growth in tourists," said Heintzman. "I think the (Sea to Sky) gondola has driven a lot of that. I think that's a little worrisome for Whistler, too, because that will create more congestion on a very limited artery."

Heintzman said the rail line could dovetail with recent suggestions for a passenger ferry from Vancouver to Squamish as Lower Mainlanders continue to relocate to the area.

Crompton said the plan certainly would have to address the challenges of the topography.

"My understanding is that a high-speed rail cannot function in conditions where the track turns too sharply, so what they would require is longer, straighter stretches," he said. "Where the current track is unsuitable, (the developers) propose to tunnel or use an alternative route."

RMOW Mayor Nancy Wilhelm-Morden said Sqomish Developments approached her and Chief Administrative Officer Mike Fury in order to secure support for the next step of acquiring grants for the feasibility study. The RMOW issued a letter of support.

"Our success as a community and a tourism destination is very closely linked to access and all of the people who visit us come by way of Highway 99 and we're seeing congestion issues," Wilhelm-Morden said. "So if there is a way to alleviate that by way or rail and high-speed rail, that would be wonderful."

Wilhelm-Morden noted that, historically, there have been several analyses for the feasibility of high-speed rail in the corridor, but "for whatever reasons — cost or demand and so on, it's never been pursued."

If the rail line goes ahead, a weekend trip from Vancouver to Whistler that now can take three hours by car, conceivably could be shortened to about an hour and a half.

- With files from the Squamish Chief