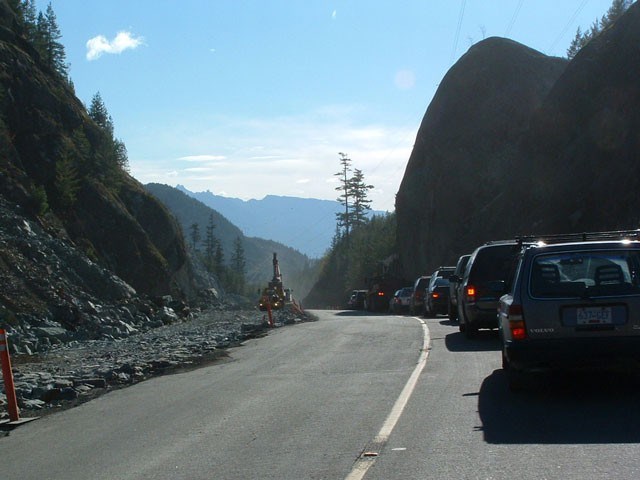 Highway 99's renovations could be causing more people to speed.

By Claire Piech and Clare Ogilvie

More letters are heading to Victoria over concerns about safety and access to Whistler along the Sea to Sky highway following another fatal accident, which took the life of a mother of two coming to town for a vacation.

“Rest assured that we’ve already spoken to (local MLA Joan) McIntyre and spoken with the Ministry (of Transportation), but it doesn’t hurt to reinforce and send another letter to maintain pressure on those agencies,” said Whistler Mayor Ken Melamed at council this week.

He added that other Whistler organizations are also diligently writing letters to the transportation ministry expressing their concerns.

“Whistler-Blackcomb and Tourism Whistler have already sent letters to the Minister and CC’d (carbon copied) our MLA Joan McIntyre,” he said.

Transportation Minister Kevin Falcon is aware of the concerns and pointed to an increase in vehicle inspections being undertaken in an effort to at least get vehicles not prepared for winter driving conditions off the road.

“There have been accidents on the Sea to Sky and in the winter most of them are due to issues of poor tires on the cars,” said Falcon.

“That is a problem. That is why we had our Commercial Vehicle inspectors (CVSE) and the RCMP undertake a joint effort (recently) to do tires checks on the highway between Squamish and Whistler.

“… Numerous vehicles were prevented from continuing up the highway because of the poor tires and several charges were laid.

“We are going to start doing these things on a frequent basis so (drivers) don’t know when it is happening, but it will help get the message across that we expect people to have proper tires when they are coming up to Whistler.”

According to the ministry, CVSE targeted 47 commercial vehicles suspected of having possible safety infractions, of which 20 were placed out of service for either mechanical defects (e.g. suspension, steering), tire defects, or because the driver did not have the proper class of licence.

Police are still investigating the fatal accident on Friday Feb. 15, which took place just south of the Big Orange Bridge at Culliton Creek.

According to RCMP Corporal Dave Ritchie of the Sea to Sky Regional Police Services, preliminary inspections show that all vehicles were ready for winter conditions. There is no indication at this time that drugs or alcohol were a factor.

The accident happened at about 4:45 pm. Driving conditions were good, save for a buildup of slush on the non-travelled section of the lanes, as well as sand and grit from safety crews.

The driver of a 2003 Pontiac Vibe, leaving work at Whistler Olympic Park and heading to his Britannia Beach home, pulled into the passing lane to go around a Surrey school bus heading south with a load of students. The car lost control and hit a northbound 2004 Lincoln Town Car limousine. It then collided with the southbound school bus.

Darcy Balcomb, 40, of San Diego was in the back of the limo at the time of the accident and was killed. Her children, aged eight and 12, and her husband were taken to Squamish General Hospital for treatment of minor injuries and have since been released.

All the occupants of the school bus were uninjured. The driver of the Vibe and the limo were not seriously injured.

The accident investigation scene took over all four lanes and the highway was closed for five hours on the Friday, which was the start of the U.S. Presidents Day long weekend.

“We did have three reconstructionists and two level two accident investigators at the scene,” said Ritchie.

“You can’t skimp on the investigation because then you can’t get it through the courts if you have to.

“We appreciate the frustration of people but we have to do our job and we do it as expediently as possible, but it does take time.”

RCMP Inspector Norm McPhail addressed this week’s council on the issue as well, citing speed as an ongoing concern as the $600 million highway upgrade continues.

“The highest speeds that have been recorded are on the new sections of Lions Bay,” said McPhail.

“As these areas open up, we have to be there to fly the flag and remind the public (to drive safely).”

“The more police presence on the highway, the more driving behaviour improves,” he said.

Having a critical crash investigation team located within the region that can respond to these situations quickly is something that is needed to speed up the process, he added. The team is currently located in Surrey.