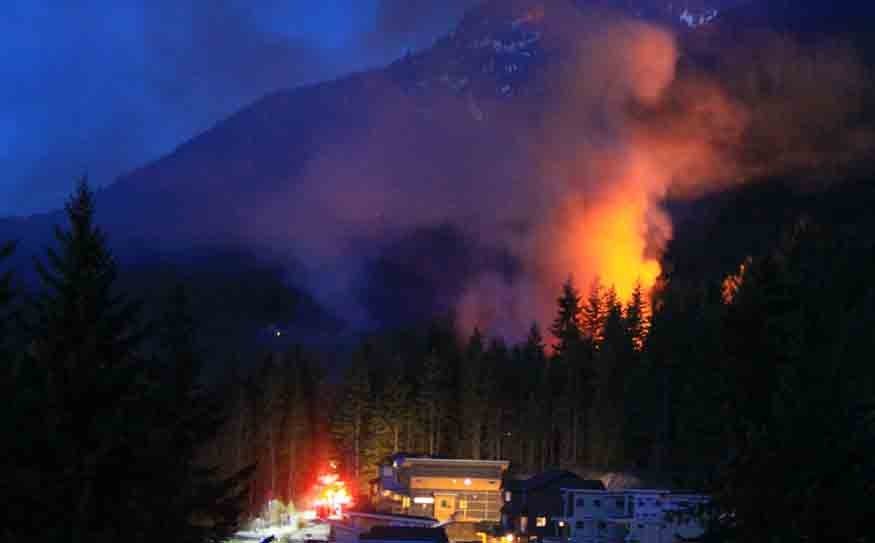 A home built in 1973 on Mountainview Drive went up in flames early in the morning on Saturday, May 4 and forced the 14 people sleeping in the home to scramble out of the house to safety.

Fire Chief Rob Whitton confirmed that 16 people were living in the five-bedroom home and he noted that the night the house burned two residents were away.

Whitton said he heard at the scene of two people in the home who helped others get out of the burning building.

"Apparently, someone in the basement literally dragged the occupants out because they were not getting up," said Whitton. "Somebody up on the main floor of the house actually went to the top floor bedroom and dragged the two occupants out of that room."

A 911 call was placed at 4:08 a.m. to report the fire and Whitton said 36 firefighters responded from all three fire halls in Whistler with every vehicle Whistler Fire Rescue Service has.

"This is typical for a house fire that we get," said Whitton. "It is usually in an older home that we have these fires and we try and get as many people there because with the nature of fire fighting we need to rotate crews through. When they go through air bottles we need to get them through rehab and get them back on the job."

Whitton noted that everyone got out of the home without injury but many personal possessions were lost in the blaze, including a motorcycle.

"There's definitely the remains of a Harley Davidson in the pile of debris," said Whitton.

The homeowner had insurance and the insurance value of the property is $400,000. While an investigation into the cause is still underway, Whitton said it is not a suspicious fire. He added that there isn't much left of the house so he is relying on witness statements to determine how the fire started.

The firefighters had the fire under control by 5:45 a.m. and by late morning an excavator was brought in to pull the house apart and remove much of the debris from the scene. Whitton said Whistler Fire Rescue left what remained of the house at 2:30 p.m.

"For $10 you can have that piece of mind and you can put that in your bedroom or just outside your bedroom and be covered," said Whitton.

He added that smoke detectors not only save lives but they can also help reduce property damage as early detection can mean firefighters can get to the scene before a home is engulfed in flames.

The flames from the weekend fire in Alpine Meadows were visible from other neighbourhoods. The heat from the fire scorched trees near the home.

Whitton said the 14 people in the home got assistance from Emergency Social Services (ESS). Information provided by ESS indicated that the group was put up in a hotel and provided with clothing, food and other necessities. ESS also pointed out that a dog also made it out of the burning home. The ongoing needs of the renters are being provided by Whistler Community Services (WCS).

Claire Mozes, the interim executive director of the WCS, said long term help would be given.

The fire danger rating can be found at http://bcwildfire.ca