Homemade backyard ice bar 'quite a work of art' 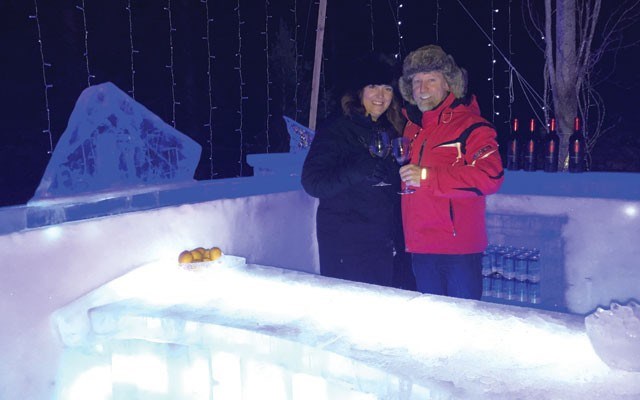 Over 100 people partied hardy at a Cheakamus home this past weekend to celebrate Jackie Jackson's 50th birthday. A strong turnout, no doubt, that was surely bolstered by a dazzling homemade ice bar right in Jackson's backyard.

"It's absolutely amazing, quite a work of art," Jackie said. "Nobody had ever seen anything like it."

Jackie's birthday present was the handiwork of husband, Tom, a tile contractor by trade.

"The blocks of ice are a lot like tiles," said Tom. "Those skills lend themselves very well."

This isn't the first time Tom has put his skills to good use. He has carved several backyard ice bars in the past — including one for his own 50th birthday several years ago — but this one outdid them all.

"We've made smaller ones over the years, but (Tom) really went out of his way this year with the help of a few friends pulling ice out of the lake," Jackie said.

The two-week process was a labour-intensive one. First, Tom started by sketching the design. Then, with the help of five friends, he headed to the Callaghan to carve out several blocks of ice out of a frozen pond before hauling them back to the truck using a makeshift toboggan he built himself. He then used plastic-covered plywood to form a foundation, before filling the forms in with snow and ice, and watering them down regularly.

The structure itself is something to behold. The bar is over two metres long and 1.5 metres high, and includes two thick columns in the centre. No detail was overlooked: Tom's design included a slab of ice carved in the shape of a heart that lights up red, spelling Jackie's name. Even the shot glasses — all 300 of them — were moulded out of ice.

"It's something to see, just the detail that's gone into it," said Jackie. "Tom's a perfectionist."

Tom unfortunately didn't get to enjoy the full fruits of his labour at Saturday night's party. A server who dropped out at the last minute meant Tom had to man his own bar, pouring drinks for the thirsty revelers in attendance.

On the bright side, the couple plans to make full use of the bar before it melts away by hosting fondue parties out of their backyard. And while Jackie will be sad to see it go, there's at least one silver lining.

"I guess it melting will probably be good for my liver," she laughed.