The HI-Whistler (Hosteling International Whistler) at Cheakamus Crossing has only been in operation since July, but is already surpassing estimates.
Sep 17, 2010 8:59 AM By: Pique Newsmagazine Staff 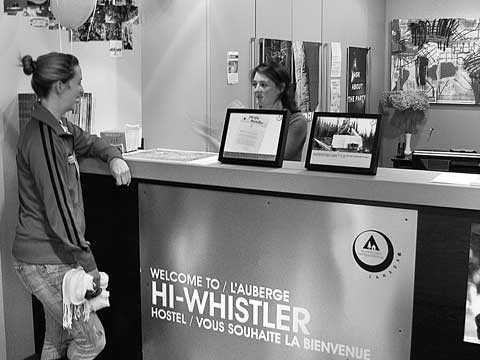 The HI-Whistler (Hosteling International Whistler) at Cheakamus Crossing has only been in operation since July, but is already surpassing estimates.

"We had one weekend where we almost hit 100 per cent (occupancy) but one room was still under construction," said manager Chelsea Turnbull. "We were turning people away."

The weekend in question was the second weekend of the Crankworx freeride mountain bike festival, already one of the busiest nights of the summer for the resort. But while the action was in the village, the low rates and an abundance of rooms at the hostel gave over 100 young people the chance to be part of the event.

The hostel held its official grand opening Thursday, Sept. 9, showing off a facility that is modern, comfortable and already occupied by a few dozen young people. They lazed in chairs and read books, played pool in the games room and tapped away on laptops as tours came through.

Councillor Tom Thomson, acting mayor, made a point of asking travellers how they rated the hostel out of five stars. The guests were unanimous in giving it all five.

The four-storey building is owned by Hosteling International, and has a capacity of 188 people. There are 14 private rooms with queen beds and ensuite bathrooms. Other guests stay in male, female and co-ed dorm rooms with four bunkbeds in each. Most of these rooms have ensuite bathrooms as well, with a full set of washroom facilities

There is a modern kitchen and cafeteria, outdoor patios, a games room, library a television/movie room (with flat screen television and leather chairs), a coffee shop, bike/ski/snowboard storage, laundry and a lobby with space to sprawl in. Bulletin boards are already packed with messages and fliers and there is a full-range of daily activities for guests, like discounted tours offered by local operators, walking trips to Logger's Lake and the Don MacLaurin suspension bridge. Even beer tasting tours, at Whistler Brewing's new facility in Function Junction, are listed.

The building itself is surrounded by brown fields of dirt piled on Whistler's former landfill, but there are plans to lay sports fields in the area and create green space for next year.

According to Turnbull, bookings are strong for December and January - "an increase over what we were expecting" - but overall a huge amount of business is last minute.

"We're experiencing a lot of last minute bookings, the occupancy can go up 20 per cent in one day," she added.

They have also had interest to book the facility for longer stays, one or two months, but so far are only open for nightly stays. They have agreements in place with various ski and adventure companies during the winter, but otherwise Turnbull says the goal is to keep the facility open for backpackers and discount travellers - young people who are Hostelling International's core focus.

According to Turnbull, just one employee from the previous HI hostel on Alta Lake, which closed on July 1, made the move to the new facility. It takes roughly 20 staff to operate the new building.

By comparison, eight staff ran the previous hostel, which had a capacity of 28.

The previous hostel also required a shuttle to get guests to the village, while the new location is already served by Whistler transit.

"Walking distance to the mountain would be nice, but it's a beautiful spot and our guests can jump on the bus and be in Creekside in 10 minutes," said Turnbull. "The most frequent question we get is 'how do I get to the village,' but from what we've heard our guests like this location - they're hiking and riding on the trails, which we think are some of the best in Whistler."